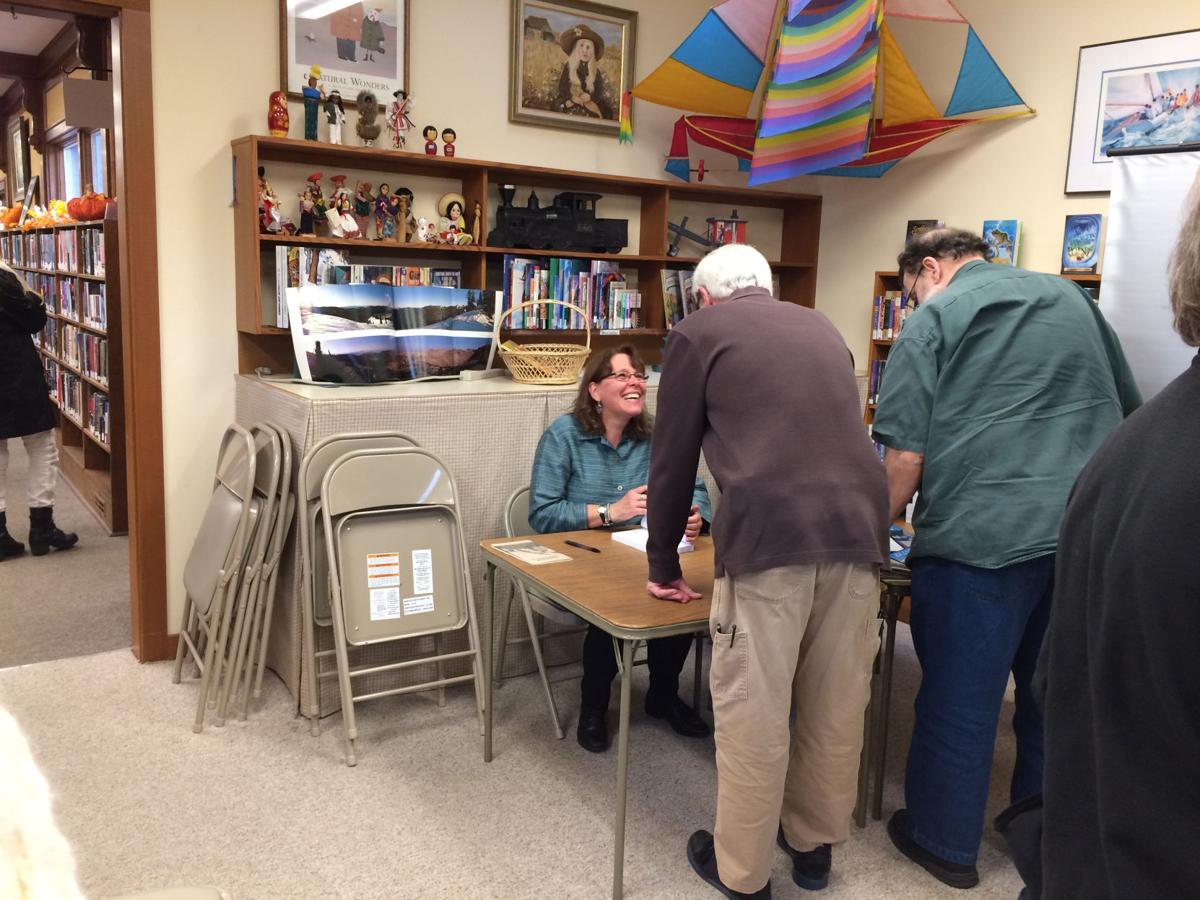 For those attending the presentation on Oct. 7, Christine Colasurdo would donate a portion of all sales of her book to the Cannon Beach Library. Here, she signs her book “Return to Spirit Lake” for an avid fan. 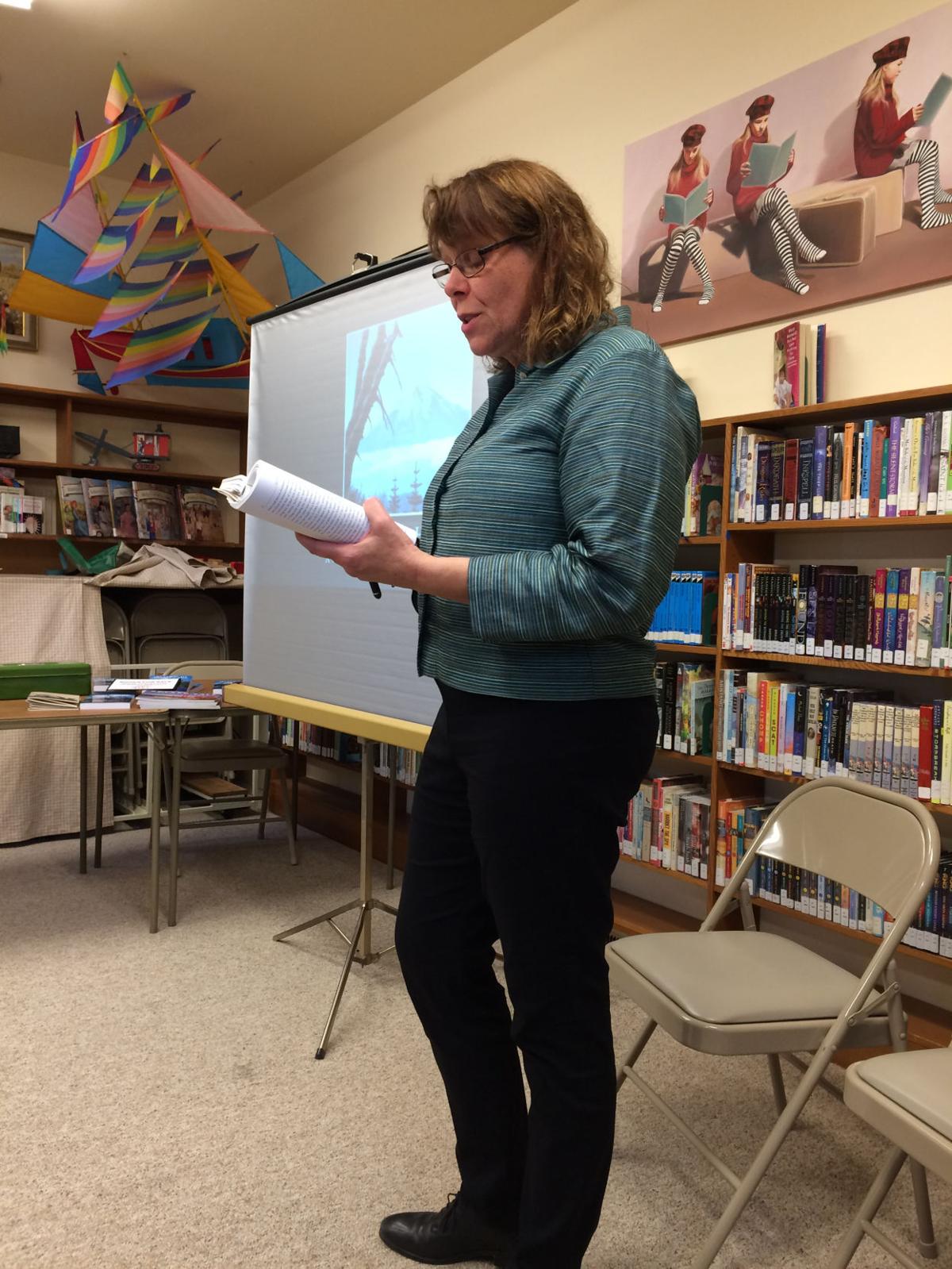 Christine Colasurdo gives a reading of her book “Return to Spirit Lake” on Oct. 7. Her presentation explaining the after effects of the May 18, 1980 eruption of Mount St. Helens was part of the Northwest Author Series put on by the Cannon Beach Library.

For those attending the presentation on Oct. 7, Christine Colasurdo would donate a portion of all sales of her book to the Cannon Beach Library. Here, she signs her book “Return to Spirit Lake” for an avid fan.

Christine Colasurdo gives a reading of her book “Return to Spirit Lake” on Oct. 7. Her presentation explaining the after effects of the May 18, 1980 eruption of Mount St. Helens was part of the Northwest Author Series put on by the Cannon Beach Library.

The volcanic eruption of Mount St. Helens devastated the Pacific Northwest on May 18, 1980, taking lives, destroying homes, forestland and wildlife. Since the 1980 eruption, Mount St. Helens has been the most studied volcano in the world.

Christine Colasurdo, author of “Return to Spirit Lake,” recounts how the eruption permanently changed her plans from living and working at Spirit Lake. Through a slideshow displaying photos of pre- and post-eruption, Colasurdo gave her presentation of “Mount St. Helens: A Welcome Journey Through 40 Years of Change” to a standing-room only audience on Oct. 7 at the Cannon Beach Library as part of the Northwest Author Series.

Colasurdo had many childhood memories of camping, hiking and working at Spirit Lake, as she recalls in her book. In 1977, her parents bought a cabin “located about six miles from the volcano,” she said, showing a slide of the cabin situated at the foot of Mount St. Helens just off the banks on the north fork of the Toutle River.

Recalling the events from that day, Colasurdo explained that in the spring of 1980, the area next to Goat Rocks started to swell. “So what happened on May 18, 1980 is the mountain fell apart,” she said. “A giant landslide, actually the largest landslide ever witnessed by humans, slid down into the Toutle River valley. My family’s cabin was in a direct line of that and the cabin was estimated to be under 600 feet of mountain top.”

Before the blast, the summit peaked at 9,677 feet and was the fifth highest mountain in Washington. The lateral blast removed the upper 1,300 feet, leaving a horseshoe-shaped crater.

Considerable changes have occurred to the landscape post-1980 eruption. She explained how the topography has varied. Ponds and lakes have formed, and what was once an old growth Douglas fir forest affected by previous eruptions, was now cottonwood. “Soon after the eruption, beavers made their way up creating dams, alders and cottonwood grew, and now it has become a closed canopy cottonwood forest.”

In a 1978 scholarly paper written by U.S. Geological Survey scientist Dr. Dwight Crandell and USGS geologist Don Mullineaux, the two had pieced together evidence of regular eruptions (about every 150 years), warning that the restless volcano was primed to erupt before the turn of the century. But, “no one paid any attention to them,” Colasurdo said.

“The amazing thing about Mullineaux and Crandell is that they predicted every single thing that happened on May 18. Except, the one thing they missed was the lateral blast,” which was the primary cause for loss of life. Many who died were those camping outside of the red zone that was thought to be relatively safe. “The lateral blast came over the landscape in 10 minutes — super fast and super hot,” she said.

Mount St. Helens is 40,000 years old; making it is the youngest and most active volcano among the Cascades, Colasurdo said. Its summit cone — known as a composite or stratovolcano — was formed through four eruptive stages 275,000 years ago. The modern day cone (pre-1980) was constructed during the last 3,000 years.

Composite volcanoes are more inclined to erupt explosively and pose considerable danger to life and property, as was the case with Mount St. Helens primarily due to the lateral blast.

Just days afterward, the volcanic ash cloud drifted east across the United States and circumvented the globe in two weeks.

Through the zones of devastation, there are new growth forests, new lake formations, changing flora and fauna, and glaciers disappeared. But, according to Colasurdo, “In this time of climate change and global warming, Mount St. Helens has a new glacier that’s actually growing in the Cascade Range.” Located near the lava dome, the geological survey named it Crater Glacier.