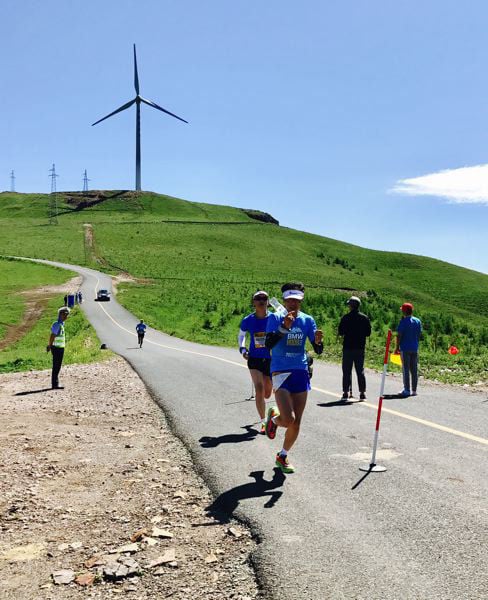 The Hood to Coast Relay recently debuted in China. 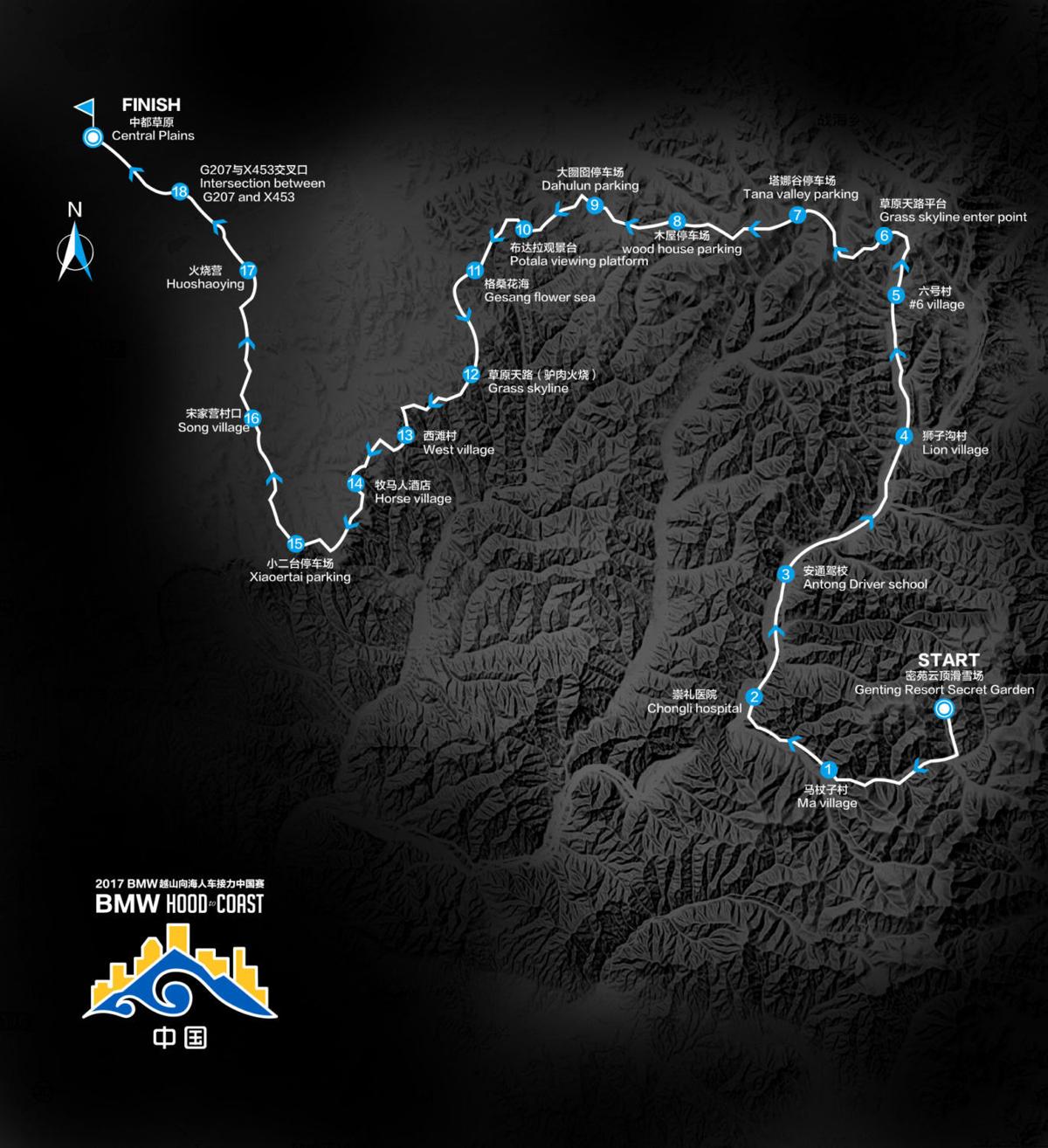 The 109.2 mile relay course begins in Zhangjiakou at the Genting Resort Secret Garden, traversing past Chongli City, finishing in the central plains of northeast China. 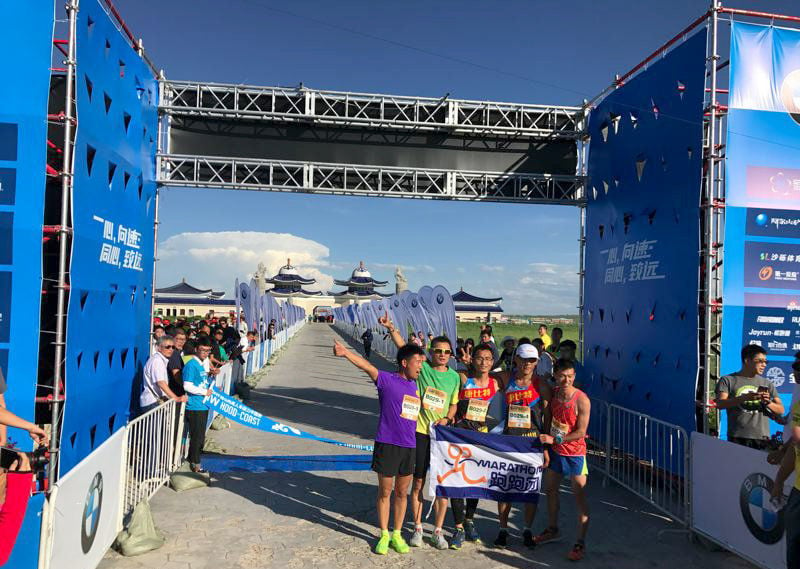 Team Saloman runners celebrate their victory in the inaugural Hood to Coast China.

The Hood to Coast Relay recently debuted in China.

The 109.2 mile relay course begins in Zhangjiakou at the Genting Resort Secret Garden, traversing past Chongli City, finishing in the central plains of northeast China.

Team Saloman runners celebrate their victory in the inaugural Hood to Coast China.

Thirty-five years ago, with little fanfare, eight teams consisting of 10 runners each took off downhill from Timberline Lodge, wound their way one at a time through Portland and small communities, and ended up at a relatively quiet finish line in Pacific City.

That was Hood to Coast Relay I.

Who could have foreseen that 2017 would be the year of Hood to Coast Relay XXXVI, and that this one race would now be part of a series of road-running events, and that another Hood to Coast I — in the world’s most-populated country — would have just been launched successfully in partnership with a company featuring China’s most popular athlete, Yao Ming.

“I would never have imagined this,” says Felicia Hubber, Hood to Coast Race Series president and the daughter of HTC Relay founder Bob Foote. “It feels so surreal.”

Hubber was on hand this month for the July 8 Hood to Coast China — the first of what is expected to be many of its kind in the Asian country of 1.4 billion.

Yao Ming and Starz International Sports were co-producers of the race. The7-foot-6-inch, 310-pound former NBA center doesn’t run, but his mere involvement helped ensure the 104-mile inaugural had plenty of support and publicity.

“The race got more media than we get here,” Hubber says. “It was the top-trending topic on WeChat, the leading social media platform in China, and it got coverage on CCTV (China Central Television).”

Hood to Coast China began at Genting Secret Garden Resort, which will be the site of skiing in the 2022 Winter Olympics and is a 2 1/2-hour drive from Beijing.

The course was framed by rolling countryside and took the runners past remote farmlands. The finish line was among wild camels in the central plains of northeast China, about 180 miles from Mongolia.

“Gorgeous,” Hubber says of the layout.

Over the years of Hood to Coast in Oregon, the often congested path of vans and runners through towns and local traffic hasn’t always been easy or entirely popular, but the Chinese took care of those issues.

“The amazing part of it for us was the course was closed by the government and the police, so it was like a dream for the runners. They were able to experience it without any traffic,” Hubber says.

Such was the attention to detail and efficiency of the event, she notes.

“The whole thing was so well organized, it exceeded our expectations,” she says. “We couldn’t have been happier.”

And, while the HTC Relay in Oregon is largely a participatory event centered on camaraderie and fun for weekend warriors, the Chinese took a much different approach. HTC China organizers handpicked the runners (200 teams of five runners each).

“It was very competitive, and the teams took it pretty seriously,” Hubber says. “Our Hood to Coast is more about the experience and being together as a team, but for them it was, ‘We want to win or be one of the top teams.’

“The team that got fourth place was crying at the awards ceremony, they were so upset they didn’t make it in the top three.”

The field for HTC China was about 60 percent male, in comparison to the HTC Relay, which is about 52 percent female.

The first wave of Chinese runners took off at 4:30 a.m., with a chilly temperature in the low 40s in the mountains. The final teams started running about two hours later.

The winning Team Saloman finished 19 legs later, and through midday temperatures in the mid-80s, in 11 hours, 37 minutes, or about a 6:27 per-mile clip.

The collaboration between the HTC Race Series, headquartered in Beaverton, and Starz Sports also means four or five Chinese teams, including Team Saloman, will be invited to this year’s Oregon race, which is Aug. 25 and 26 from Timberline to Seaside.

More HTCs in China are assured. Starz Sports has a 10-year contract with Hood to Coast. Starz would like to expand the race next year to 180 miles and add a similar event to a new city in China every year or two, making for a series of races.

“Running is a big emerging sport in China,” Hubber says. “It seems like it’s the running boom we saw in the U.S. in the late 1970s and early ’80s. People in China now have more money and expendable income, and they are thinking of their health more.”

Registration for HTC China 2018 is expected to begin in February, and Hubber says she believes the Chinese will select some international teams. ”A lot of folks here say they want to sign up, and I think we’ll have some of our teams going over there to run,” she says.

Eventually, the China races may also include casual runners and joggers from throughout the host country.

“I think it’ll probably take a few years to get to that point there,” she says. “The organizers were especially concerned this year that if they opened the race to the public, given the Chinese culture, they’d get people signing up with no experience but saying, ‘OK, I’m going to run a marathon,’ and wind up with medical issues along the course.”

Hood to Coast will have another international event in two months. The first HTC Israel is set for Sept. 14 and Sept. 15.

“And we have a few more in the works in other locations in Europe,” Hubber says. The company’s expansion also included the first Hood to Coast Washington, which took runners from Shelton to Seabrook, Washington, in June.

Oregon’s traditional Hood to Coast Relay remains capped at 1,050 teams of up to 12 runners each to cover 199 miles. Also part of the weekend event are the Portland to Coast Walk and the High School Challenge competition for 50 teams. The walk begins on the east side of the Hawthorne Bridge and follows the course to the coast and the finish line near the beach in Seaside, where parties, live music, VIP suites and more await.