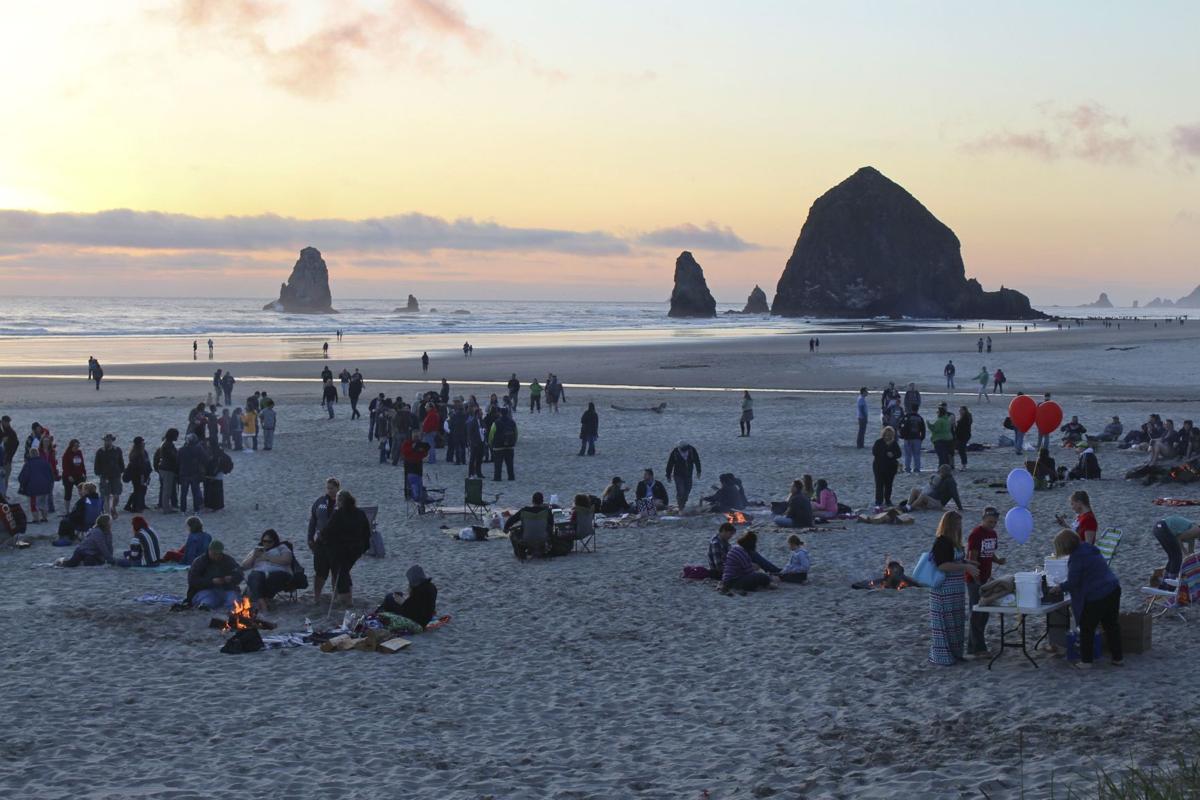 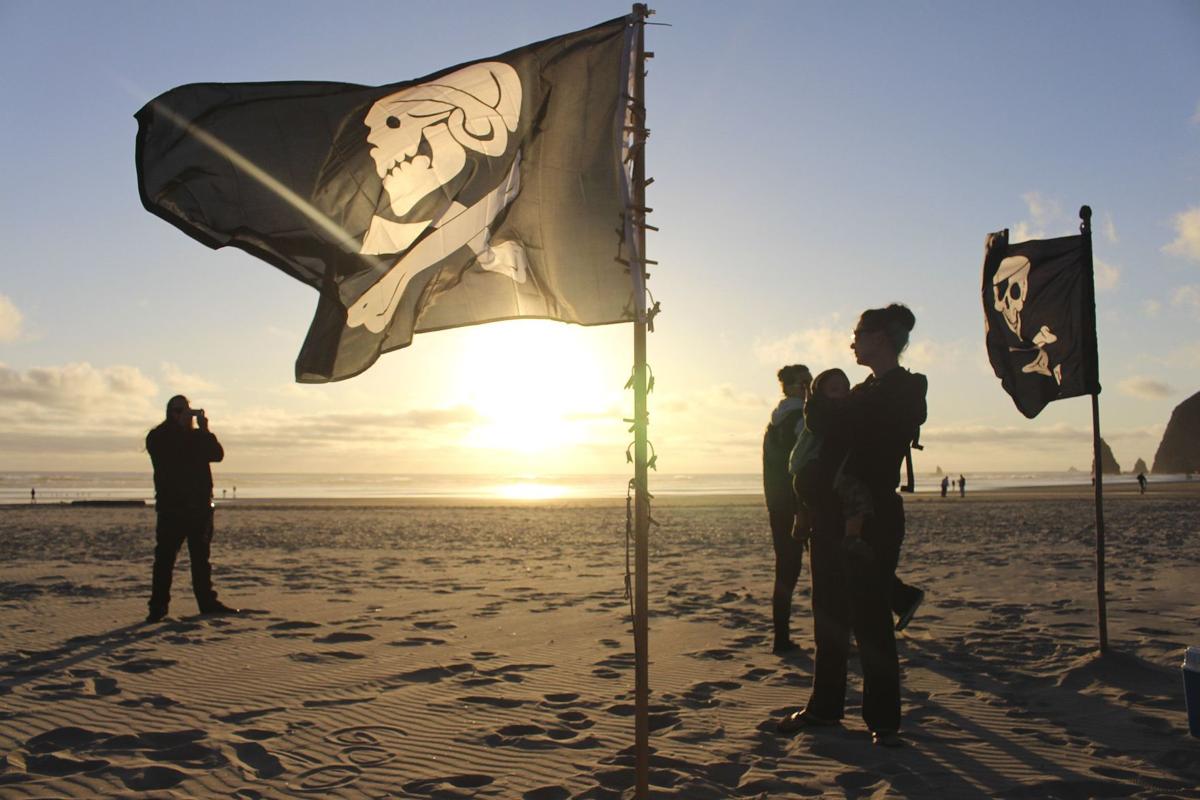 Jesse Westcott, left, takes a photo of Nicole Chisholm and their son, Walter Westcott, 1, between two flags that aren't Goonies flag per se, but they are Goonies-esque. All three are from Redmond. 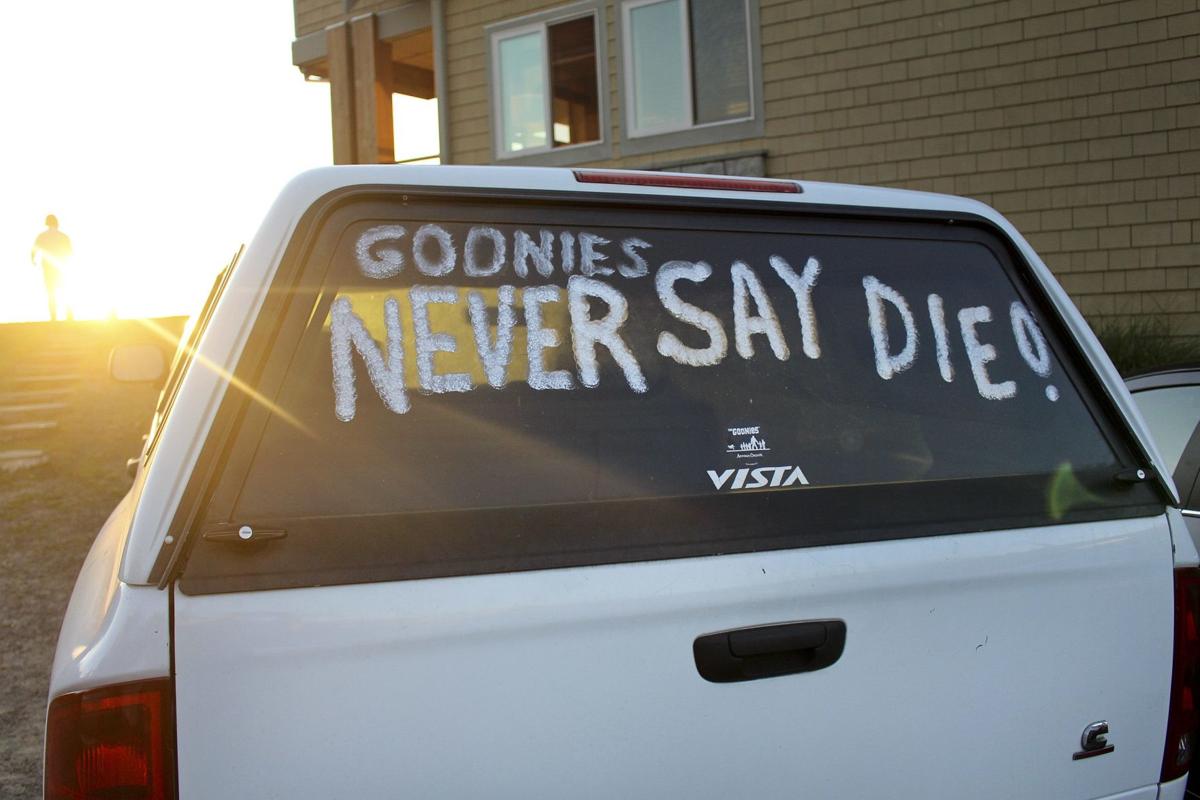 A car is painted with the oft-heard motto “Goonies never say die!” in Cannon Beach.

Jesse Westcott, left, takes a photo of Nicole Chisholm and their son, Walter Westcott, 1, between two flags that aren't Goonies flag per se, but they are Goonies-esque. All three are from Redmond.

A car is painted with the oft-heard motto “Goonies never say die!” in Cannon Beach.

Even as night fell June 4, the beach behind The Ocean Lodge, just south of Haystack Rock, teemed with about 200 Goonies fans.

Some sat around small campfires, swigging beer, roasting marshmallows for s’mores and making new friends with whom to share their heartfelt Goonies devotion. Others simply treaded in the sand, enthralled to be in the very spot where sections of the film’s opening chase sequence were shot.

Hosted by The Ocean Lodge for the Astoria-Warrenton Area Chamber of Commerce, the beach gathering capped off the opening day of the four-day Goonies 30th anniversary gala. The event not only drew stateside followers from Seattle, Michigan, San Francisco, New York, and elsewhere, it drew people from Canada, Japan, Chile, Australia and Europe.

Not bad for a popcorn flick that, shortly after its release June 7, 1985, seemed destined for B-movie oblivion — especially since, less than a month later, “Back to the Future” happened.

“It just killed ‘The Goonies.’ Everybody was going to see the DeLorean,” Hanson said. “But that has turned around — thank God — and it just keeps growing and growing.”

So what explains the appeal? Why is the Goonies’ charm so irresistible to so many moviegoers? Why does this ragtag clique of prepubescent rapscallions, who embark on a treasure hunt to save their beloved “Goon Docks” neighborhood, have such staying power?

With a foreground full of pirates and criminals, swashbuckling and slapstick, booby traps and corpses, a misunderstood monster and a few teen makeout sessions, “The Goonies,” on a deeper level, is the story of a friendship and the characters’ love for their families.

“They are generous, brave. They risk their lives for their parents, and have an incredible adventure,” said Manuel Cuesta, who traveled from Madrid, Spain, with his partner, Irene Bayon. “There are a lot of great values in this story.”

The couple, two self-proclaimed “big freaks of the movie,” decided to travel to the United States for the first time specifically to enjoy the Goonies celebration. “It’s just a symbol of our childhood,” Cuesta said.

But that isn’t to shortchange the film’s action and antics, which are rather important to the film’s popularity.

The movie “really answers some deep-seated part of you that always wanted to be an adventurer,” said Amanda Bromberg, from Los Angeles.

Bromberg, a child when Goonies came out, later worked with the film’s production designer, J. Michael Riva, on three films as a set decorator. “It’s one of those kids movies that follows through to adulthood and never becomes too childlike to watch,” she said.

That the kids are allowed to talk and act like real kids, with constant cussing and bursts of bravado, is what makes them so likable and identifiable — and so in an ’80s movie, she said.

“Even the fact that the kids were allowed to swear ...You’ll never see that again because some mom’s group will be against it,“ she said.

The Goonies bonfire was scheduled to end at 10 p.m. But that time came and went with hardly anyone noticing; attendees were too busy swapping Goonies stories, lines and trivia — attaching yet more meaningful memories to an endearing pop-culture staple that many flew halfway across the world to honor.

Hanson made appearances at the local 20th and 25th anniversary celebrations and has witnessed the rapid rise of the Goonies cult status, a phenomenon he called “mind-boggling.”

“I am delighted, because I’m still making money on it,” he joked, in between taking photos with fans.

Joey Roshinko and his younger brother, Jason, from the Borough of Bellmawr, N.J., grew up with “The Goonies.” The movie is part of their brotherly bond.

“My brother and I don’t get along with a lot of things — sports teams, and a lot of other things,” Joey Roshinko said. “But it’s always been ‘The Goonies’ for us. It’s like, ‘Hey, let’s watch `The Goonies’?’ ‘All right. Cool.’”

Not far from where a group of men had come dressed as pirates, and another group had planted two Goonies-esque pirate flags with handmade poles, Darrell Scattergood, of Seattle, smiled and said, “These people are nuts.”