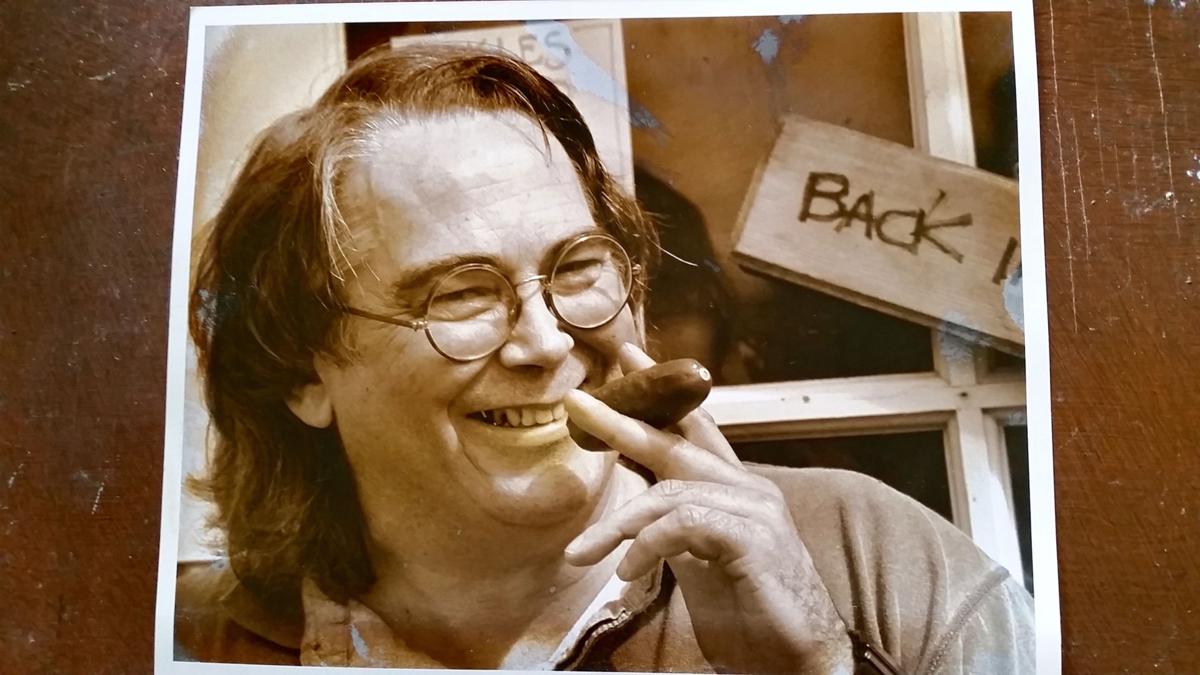 John Fraser “smokes” a pickle in front of the “pickle store” he staged next door to the kite shop he owned. Although the store appeared to be a real operation with a sign that said, “Back in 5 minutes,” it actually wasn't a store at all, and no one ever appeared to open it. 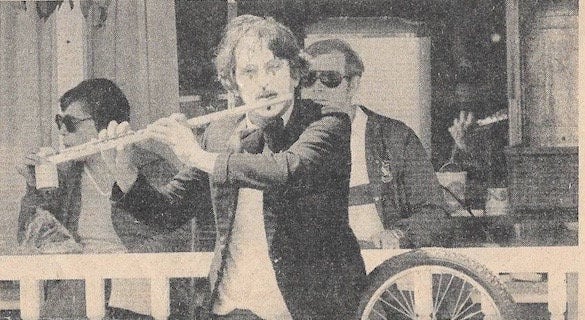 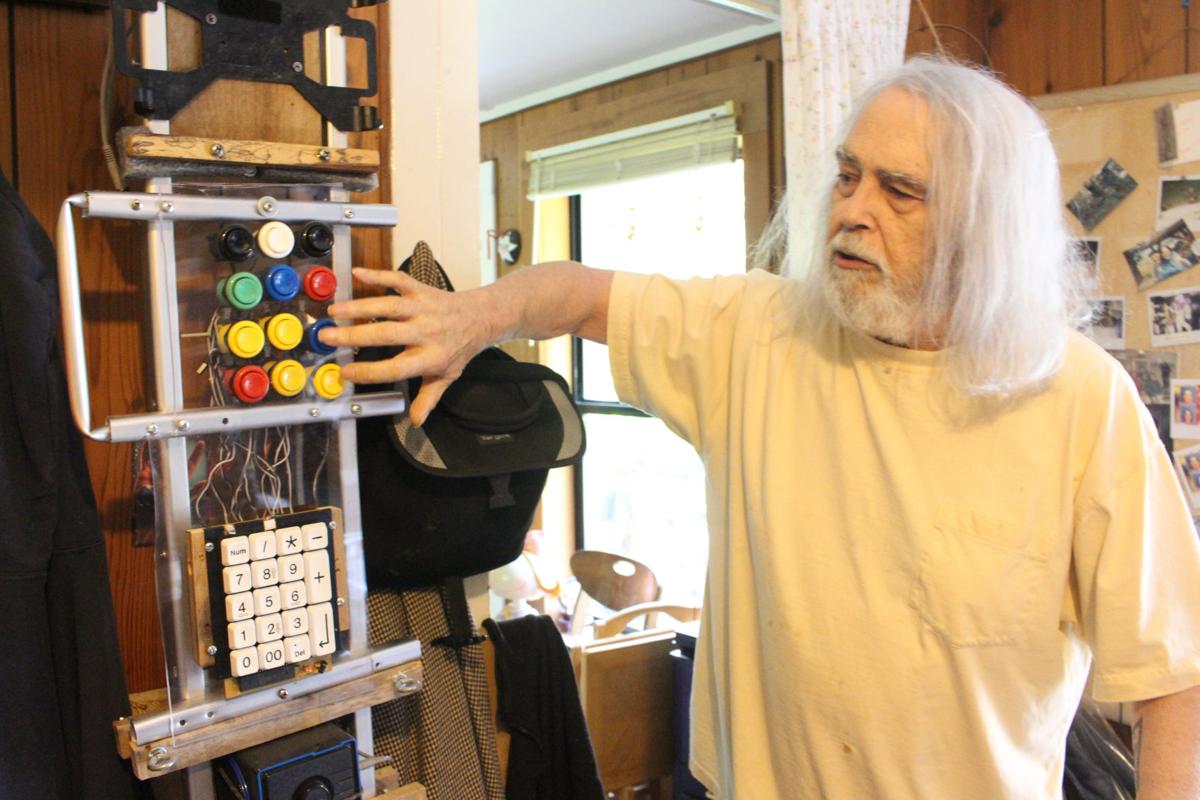 John Fraser, in his music room, shows off the MIDI controller he is making by hand with spare parts. The 12 colored buttons, once belonging to pinball machines, produce different notes.

John Fraser “smokes” a pickle in front of the “pickle store” he staged next door to the kite shop he owned. Although the store appeared to be a real operation with a sign that said, “Back in 5 minutes,” it actually wasn't a store at all, and no one ever appeared to open it.

John Fraser, in his music room, shows off the MIDI controller he is making by hand with spare parts. The 12 colored buttons, once belonging to pinball machines, produce different notes.

John Fraser called himself a Dada artist. But for John, his art was life itself.

He rebelled against rules and created minor moments of chaos in his community of Cannon Beach. In effect, he colored outside the lines.

John died at home Feb. 25, following a battle with cancer that ranged over 15 years. He was 73.

A community gathering in his honor is planned from 4 to 6 p.m. April 20 in the Coaster Theatre Playhouse, 108 N. Hemlock St.

John moved to Cannon Beach in 1975, after living in Spain and London. He was already well known as a tavern musician in Portland. Calling himself the “Juan Man Band,” John played several instruments at once — an organ keyboard with one foot, a high-hat drum with his other foot and, with his hands, a guitar, along with a box containing flutes and recorders.

“He was a hot act,” said John’s wife, Lisa. “He was one guy, and he could sound like an entire band.

“When I was 18, I sneaked into a bar to hear this amazing musician. He could do the solo from ‘Peter and the Wolf’ and go right into a blues song where everyone would hit the dance floor.

“He played 28 different instruments, and he played them well,” she added.

He often took his act to the streets of Cannon Beach, where, as a mime, he entertained children and their parents by playing his music and twisting balloons into animals for them.

He worked at Osburn’s Grocery and also lived above the store. Like many Cannon Beach artists in the 1970s, John also held other odd jobs: a fry cook at a local restaurant, bartender at the Rathskeller and at Bill’s Tavern. He also was a “beach flyer” for D.K. Smith, owner of the Once Upon a Breeze kite shop. It was his job to fly kites on the beach to entice customers.

“John liked to say he worked his way up to owner,” Lisa said. John bought the shop in 1982.

But John was known in Cannon Beach as much more than a local business operator. He was on the City Council, Planning Commission, Design Review Board and community policing team. He helped to organize the Cannon Beach Preschool and Children’s Center; the original center was housed in the same building as the kite shop on Spruce Street.

John loved living in Cannon Beach, Lisa said. “He took it so, so seriously. He tried to maintain the community so people could enjoy it, whether they were living here or visiting here.”

While he took his civic involvement seriously, John also earnestly followed his whimsy.

Known for years as the upmost April Fools’ Day prankster, John once bought many keys, had them engraved with words that said, “Back door, US Bank,” then distributed them all over town. He wanted to see how many finders would return the keys to the bank and how many would keep them.

“And the bank didn’t even have a back door,” Lisa said.

The bank also came into the spotlight when John put up fliers around town announcing that the bank had a “special” event. For every dollar bill with four or more “ones”in its serial number, the bank would replace it with a $100 bill.

“The bank manager at the Astoria branch called John and asked him to take down the fliers,” Lisa recalled. “John refused.”

A crosswalk on Hemlock just south of Bruce’s Candy Kitchen also became the focus of another prank when the police put a pedestal in the street warning drivers to watch for pedestrians. On the pedestal’s flat top, John would place objects, then sit back and see what people would do with them. One object included a landline telephone.

“My favorite was when a cop came into the (kite) shop with a giant box fan and asked, ‘Is John here?,’” Lisa said. “What better place than a crosswalk in town to study people.”

And then there was the time John nailed cooked turkey bacon strips to telephone poles.

“He delighted in watching people do a double-take when they saw that bacon,” Lisa said.

Most of the time she was as taken off guard as anyone else at his antics.

“I was constantly surprised at every turn. I never knew what was coming next,” she said.

John threw “surprise” birthday parties for himself at Bill’s Tavern with special themes; designed bumper stickers during the Lewis and Clark Exposition that said “Dogs: Pets or Food? Let’s ask Lewis and Clark”; placed jars of mayonnaise in a crosswalk on Cinqo de Mayo; and arranged to have his dedicated credit card line at his shop (436-BOMB) become a “confessional” for people to call and record their darkest secrets.

One of his best-known creations during the late pre-Facebook 1990s was a website called Cannon Beach Weather.com, where could people check out the “weather station” (a stick that followed the sun) via a webcam in John’s backyard and write about the goings-on in Cannon Beach. As the website administrator who oversaw the messages, John called himself “God.”

While adults only laughed and shook their heads at John’s latest project, children loved him, especially when he drove his van through town and threw out small plastic animals for them to catch.

“He had a huge box of toys,” Lisa said. “He was like the pied piper. It took forever for him to get home.”

And when he drove, it was usually in a car decorated with figurines he had glued to the sides and hood — plastic lizards, iguanas, nuns, doll heads — and a lawn chair on the roof. On one of his cars, he glued a clip on the front and put a $1 bill in it, with the sign, “Take Me.”

In 2001, John was first diagnosed with prostate cancer, and he successfully fought it off. In 2005, however, the cancer returned. In 2013, the community held a fundraiser to help him pay for his medication.

But for several years, his illness didn’t deter John from playing his harmonica with other local musicians during burger night every Monday at the American Legion.

“He continued to play music until he couldn’t do it anymore,” Lisa said.