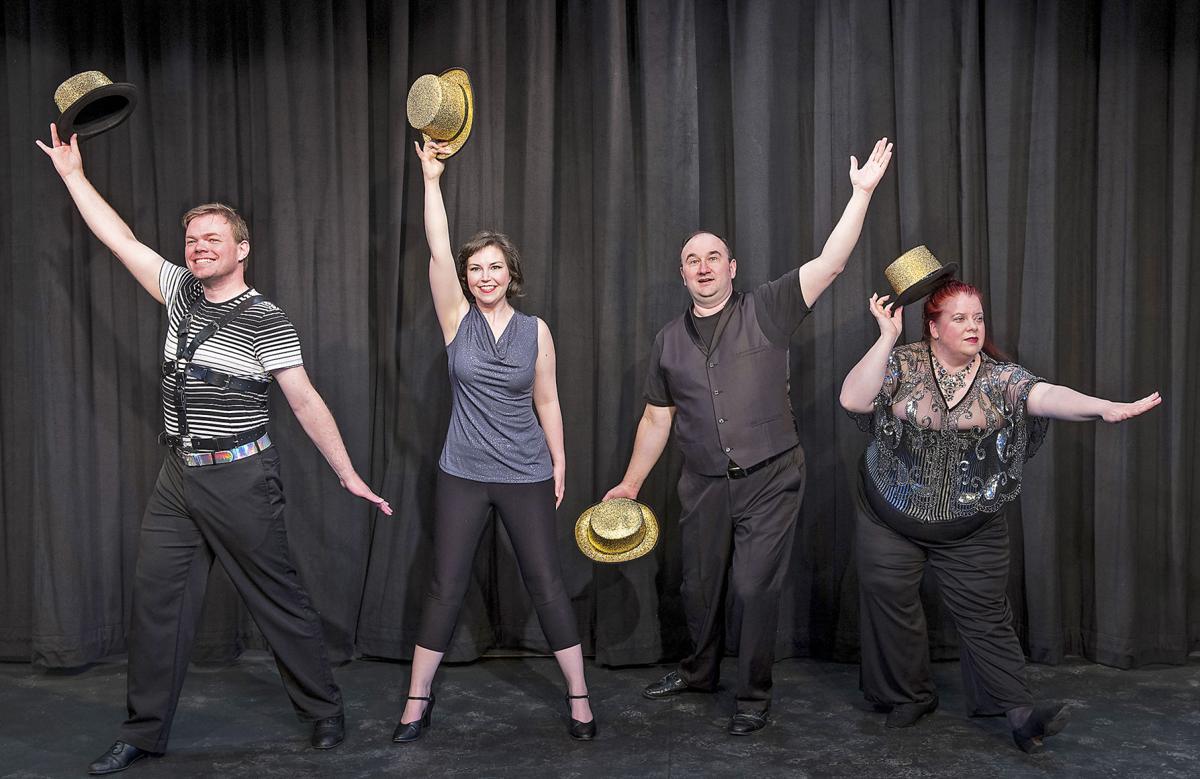 From left: Richard Bowman, Cameron Gates-Lira, Darren Hull and Ann Bronson pose for a photo from a production of ‘The Musical of Musicals (The Musical!).' 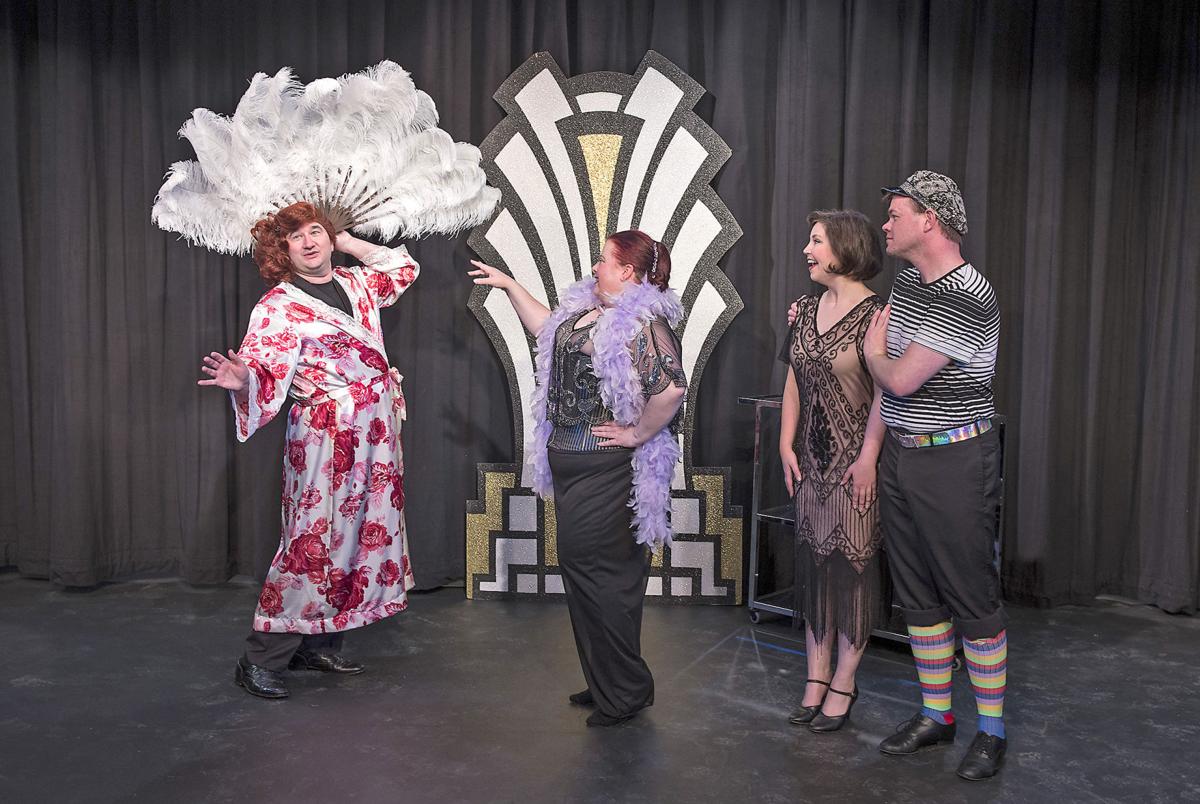 From left: Darren Hull, Ann Bronson, Cameron Gates-Lira and Richard Bowman act out a scene from ‘The Musical of Musicals (The Musical!).' 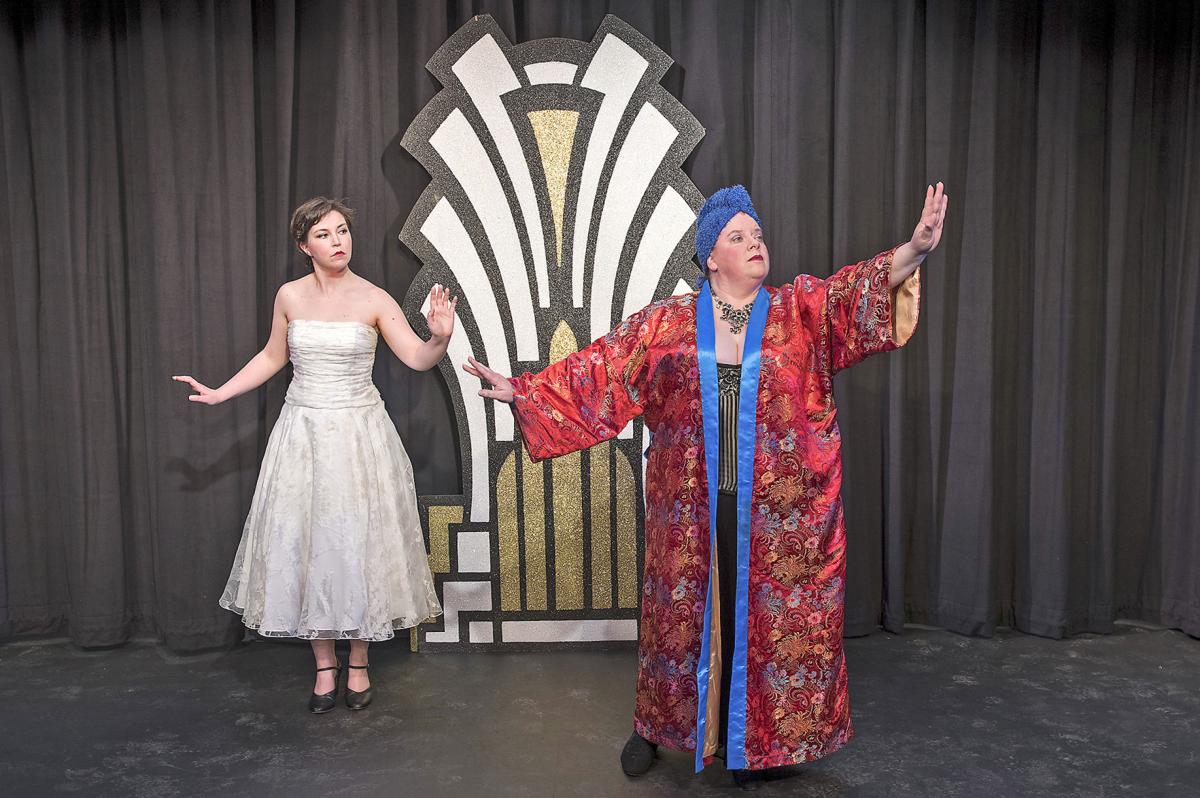 Cameron Gates-Lira, left, and Ann Bronson rehearse a scene from the production. 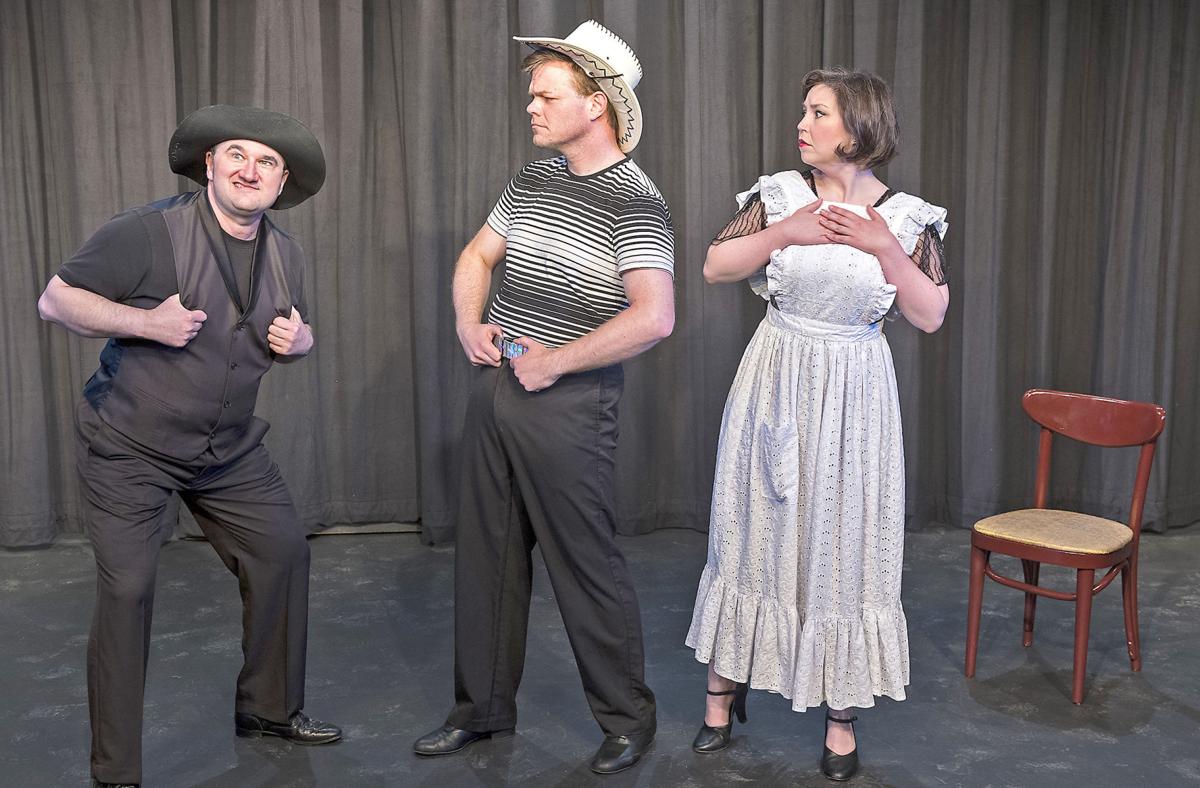 Darren Hull, left, Richard Bowman, center, and Cameron Gates-Lira pose for a photo during a rehearsal. 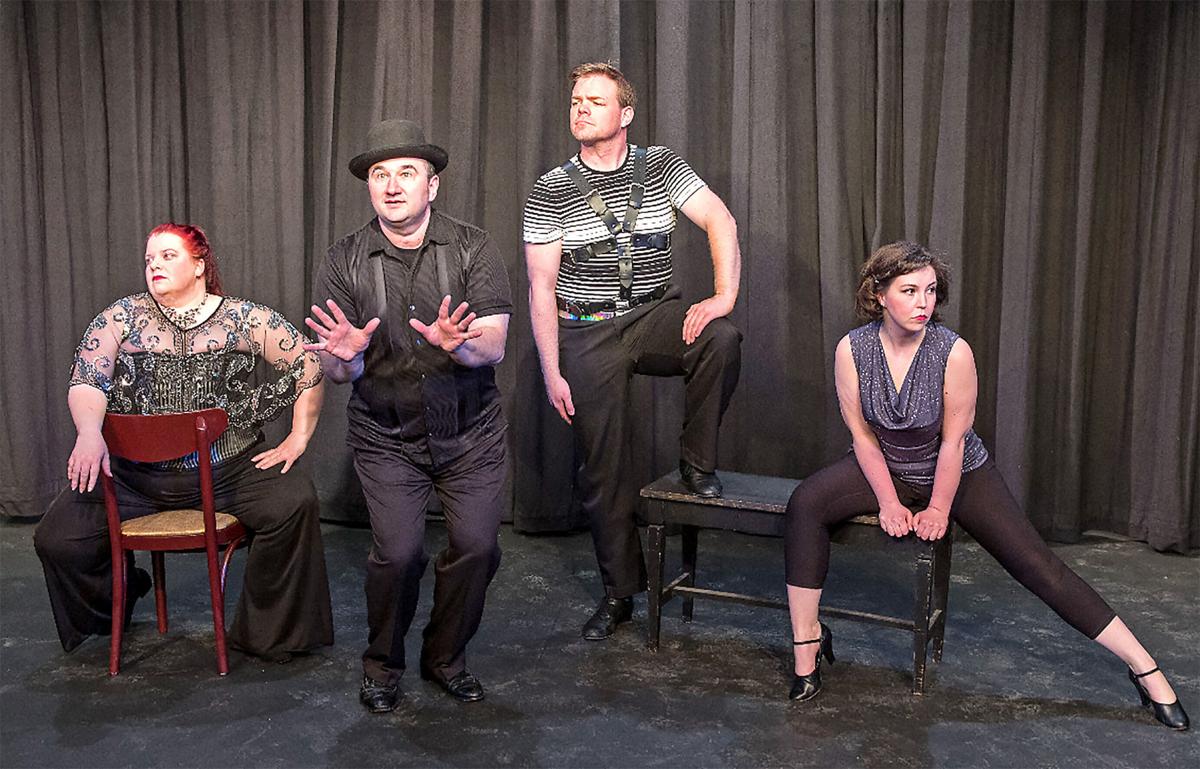 From left: Ann Bronson, Darren Hull, Richard Bowman and Cameron Gates-Lira strike a pose during a dress rehearsal of ‘The Musical of Musicals (The Musical!).'

From left: Richard Bowman, Cameron Gates-Lira, Darren Hull and Ann Bronson pose for a photo from a production of ‘The Musical of Musicals (The Musical!).'

From left: Darren Hull, Ann Bronson, Cameron Gates-Lira and Richard Bowman act out a scene from ‘The Musical of Musicals (The Musical!).'

Cameron Gates-Lira, left, and Ann Bronson rehearse a scene from the production.

Darren Hull, left, Richard Bowman, center, and Cameron Gates-Lira pose for a photo during a rehearsal.

From left: Ann Bronson, Darren Hull, Richard Bowman and Cameron Gates-Lira strike a pose during a dress rehearsal of ‘The Musical of Musicals (The Musical!).'

Even a lover of musicals may never be able to see all the musicals ever staged. But there’s one musical that may solve that problem.

“The Musical of Musicals (The Musical!),” at the Coaster Theatre, combines several composers’ styles into five satirical musicals centered on one story: How will the heroine pay her rent, and can the hero rescue her from the evil landlord?

The first version, “Corn!,” from Rodgers & Hammerstein, is set in Kansas in August. It is followed by a Sondheim selection that takes place in a New York apartment house, where the landlord is an artist with a deadly plan. Next comes a Jerry Herman version with a character reminiscent of both Dolly and Mame who advises the young heroine how to be a star and get someone else to pay the rent.

A rock musical, ala Andrew Lloyd Webber, borrows themes from Puccini, and a Kander & Ebb version with hints of “Cabaret” and “Chicago” round out the parody.

Eventually, the heroine learns how she will pay her rent — maybe.

The show is directed by Patrick Lathrop, the Coaster’s executive director. Katherine Lacaze, who has performed in several productions, is assistant director and choreographed two of the five scenarios.

“I was looking for singers who had the confidence to sing,” said Lathrop about the four-member cast.

And then there are singers who can act while they’re singing — not always an easy thing to do.

But Darren Hull, Richard Bowman, Ann Bronson and Cameron Lira, who have worked together in many Coaster productions, had the confidence and acting skills Lathrop sought. Their experience and friendship also are evident in the way they engage on the stage.

Lathrop, who has a degree in musical theater, said he enjoys the parodies and jokes in the show.

Although each version stands as a “musical” by itself, there are satirical nods within that scenario to other musicals written by each composer. “Corn!,” for instance, includes hints of “Carousel,” “Oklahoma,” “The Sound of Music,” “The King and I,” “Cinderella,” “Flower Drum Song” and “South Pacific.”

“Once we got into it, I realized the music was very complex,” Lathrop said. “Like the Sondheim — they’ve (lyricist and composer Joanne Bogart and Eric Rockwell) taken the Sondheim, but they’ve parodied him, and in doing that, they’ve taken what he does, which is difficult, and made it even more difficult within the parody.”

Most of the shows being parodied Lathrop has either seen or worked on. An audience should be able to understand the underlying winks to other works as well, he added.

“If you’ve seen the movie, you’re going to get the jokes,” Lathrop said. “But the silly little shows stand on their own. The characters are strong. The songs are really delightful little songs, and if you listen to the lyrics, they’re very funny.”

He points to a lyric sung in a speakeasy: “Here at the speakeasy it’s hard to say.” Or, “The hills are alive … but you’re half dead.”

Lira and Bronson say they discover nuances at every rehearsal.

“Every bit is nine jokes or deeper,” Lira said. “We really had to do our homework.”

Bronson, who played Dolly Gallagher Levi several years ago in a Coaster production of “Hello, Dolly!,” is familiar with a character in the Jerry Herman scenario. The woman poses majestically at the top of a staircase and claims, “I can’t sing or dance, but I’m the star of the show.”

“I’m not doing the Irish accent this time (as she did with Dolly), but I realized that I’ve been this character,” Bronson said. “I’ve seen you before.”

While Bronson’s favorite scenario is the speakeasy, Lira enjoys the Sondheim version “because I get to sing snippets of songs of roles I haven’t played before,” she said.

Among those songs is one about birds flying around her head:

“Why do the birds fly

Around my golden hair?

Are they building nests up there?”

Lira, who plays the heroine June, Jeune, Juney-Fae, Junita and Juny, remembers her mother doing the “can’t pay my rent” melodrama by using a napkin to imitate the roles.

Landlord (napkin, like a mustache, above the top lip): “You must pay the rent.”

Although the music is complex and the choreography is tricky, the cast members obviously enjoy performing together, thanks to the friendships built on and off stage.

“It’s fun to have people you’ve worked with over the past 10 years to help you pull off a joke.”

What: “Musical of Musicals (A Musical!)”