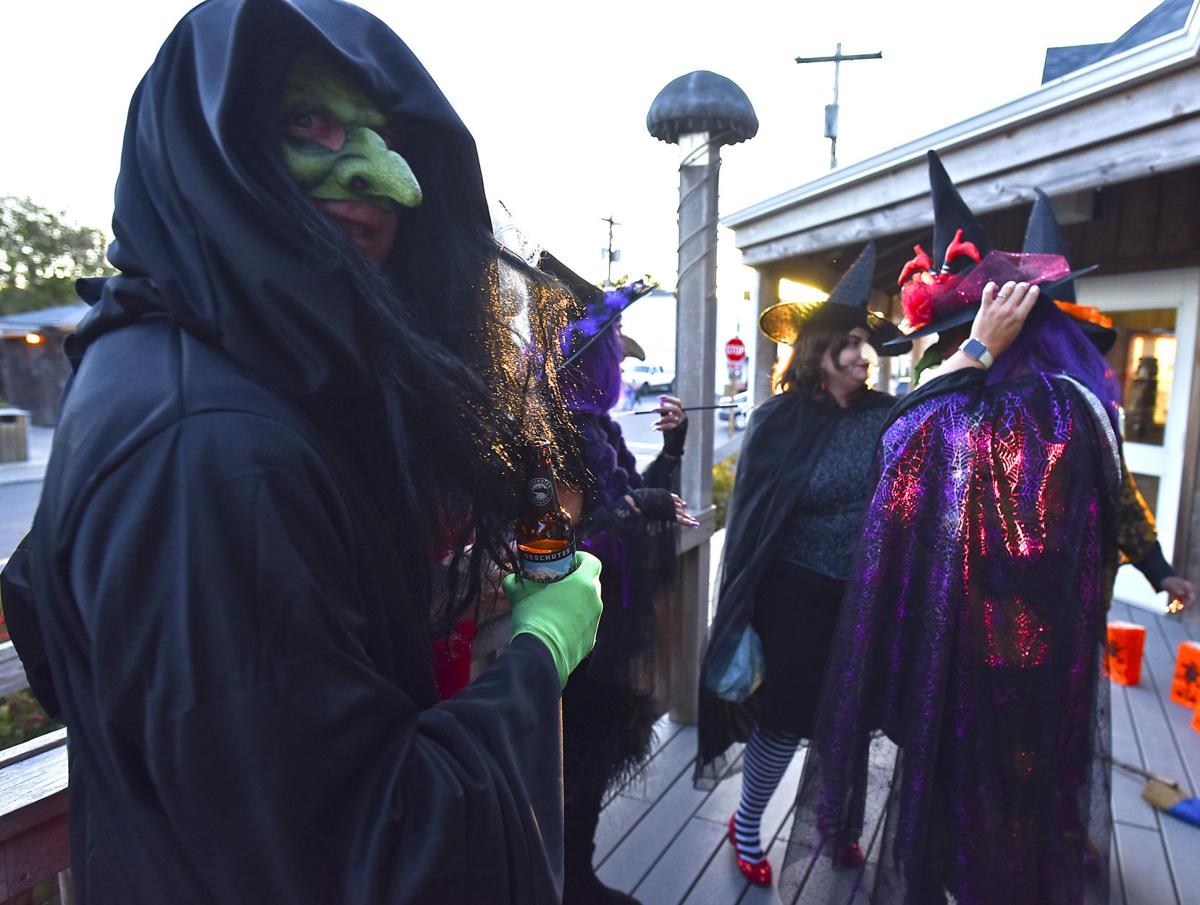 Dozens of people gathered at the Cannon Beach Community Hall dressed up for the annual Halloween event. 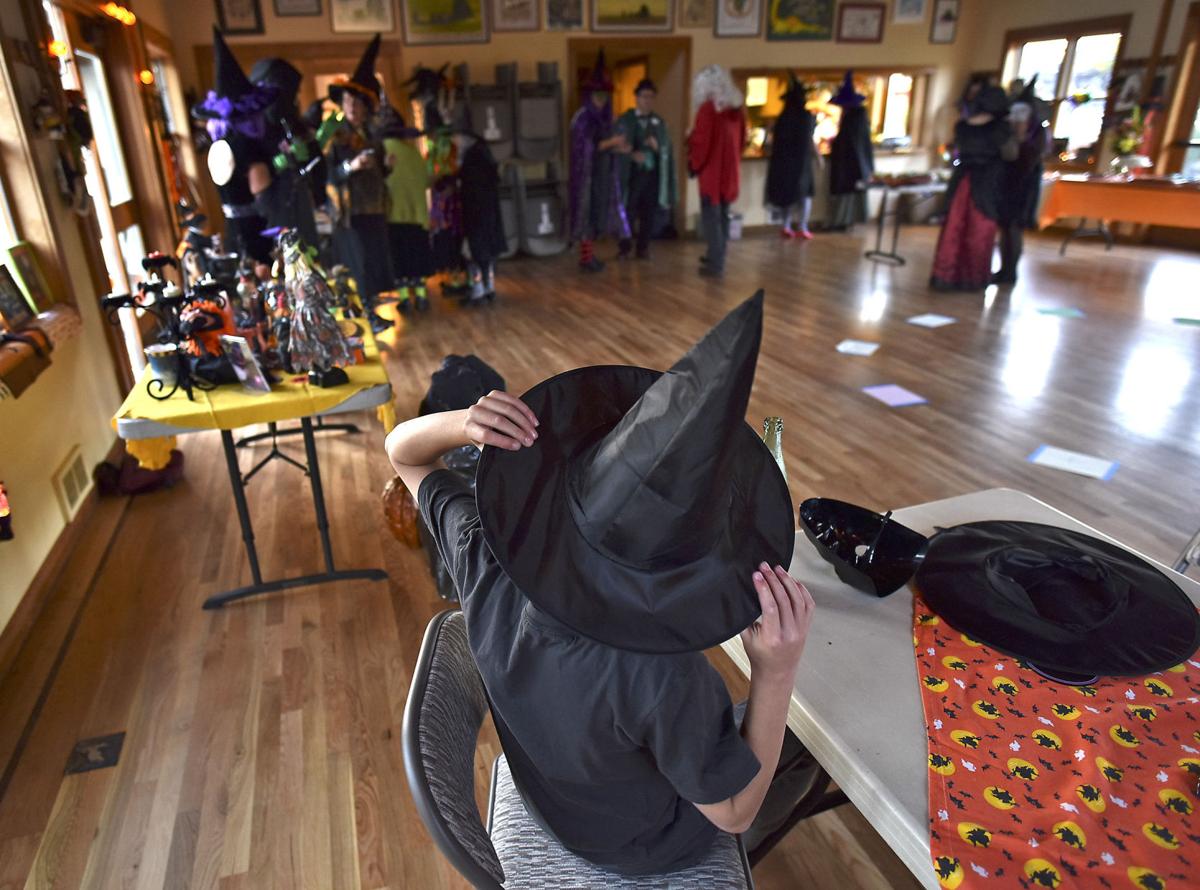 A young attendee at the annual Halloween event in Cannon Beach adjusts part of his costume. 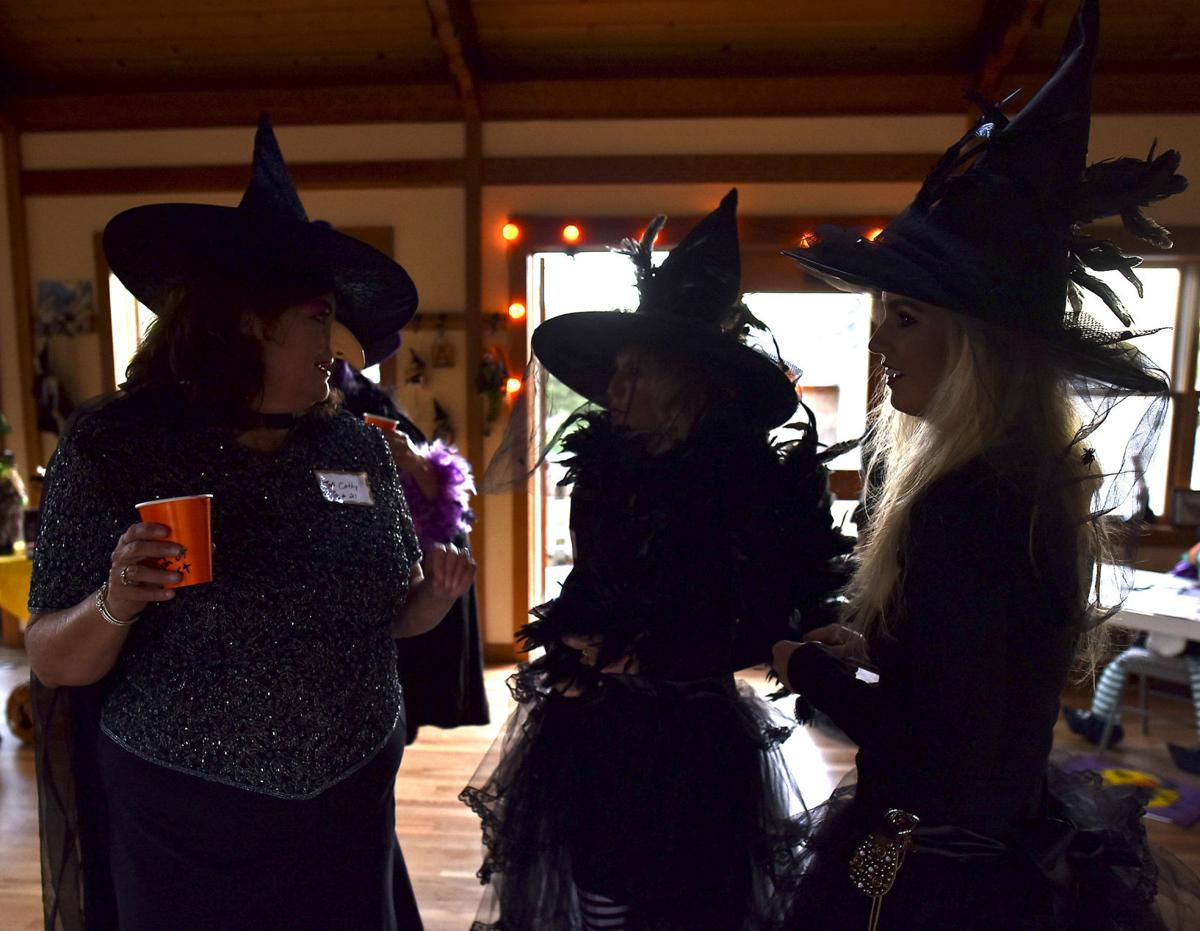 Most of those in attendance at the Halloween event in Cannon Beach came dressed as witches. 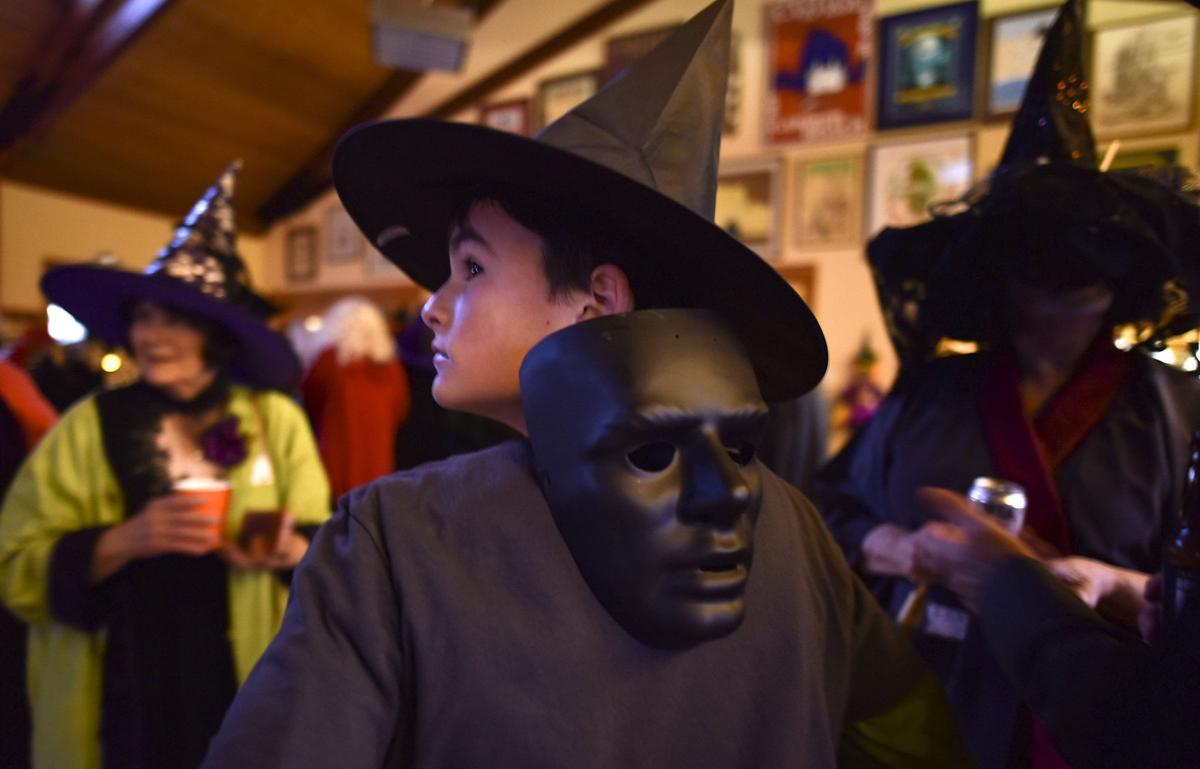 Henry Ryan was just one of many people dressed up for an annual Halloween event in Cannon Beach. 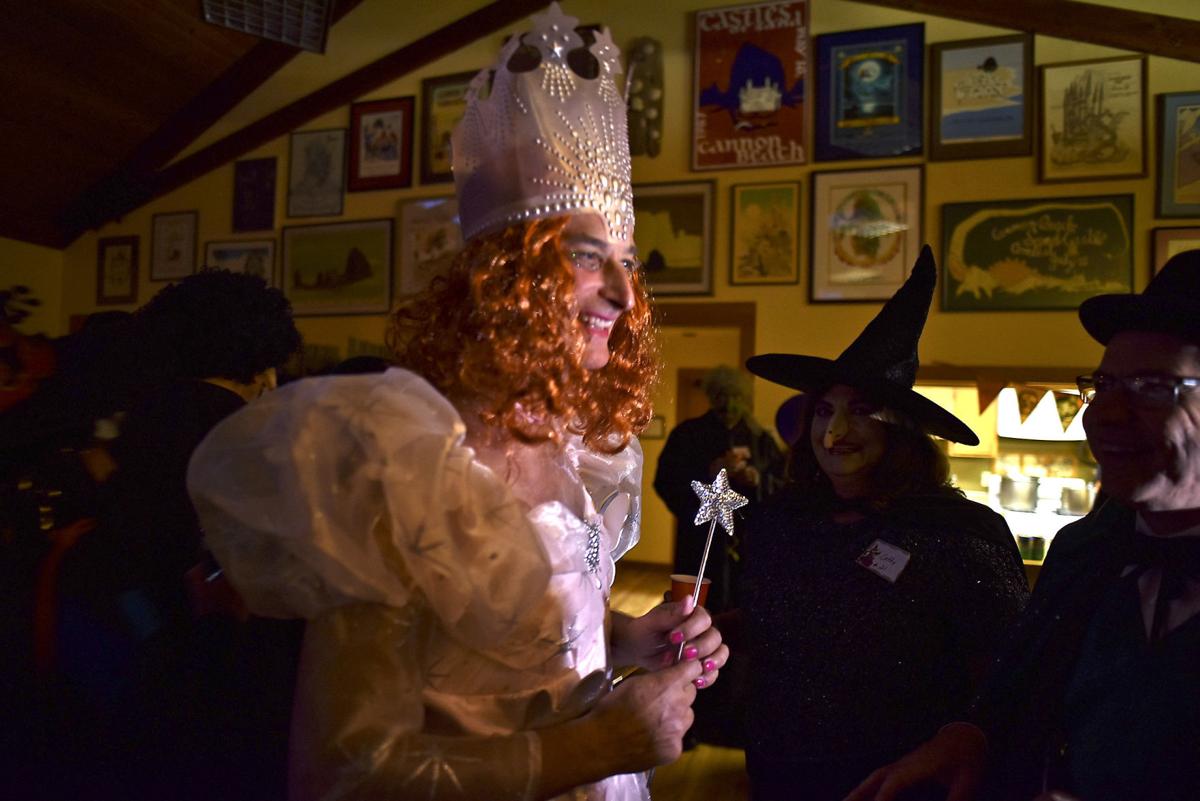 One partygoer in Cannon Beach arrived dressed as Glinda the Good Witch from the ‘The Wizard of Oz.' 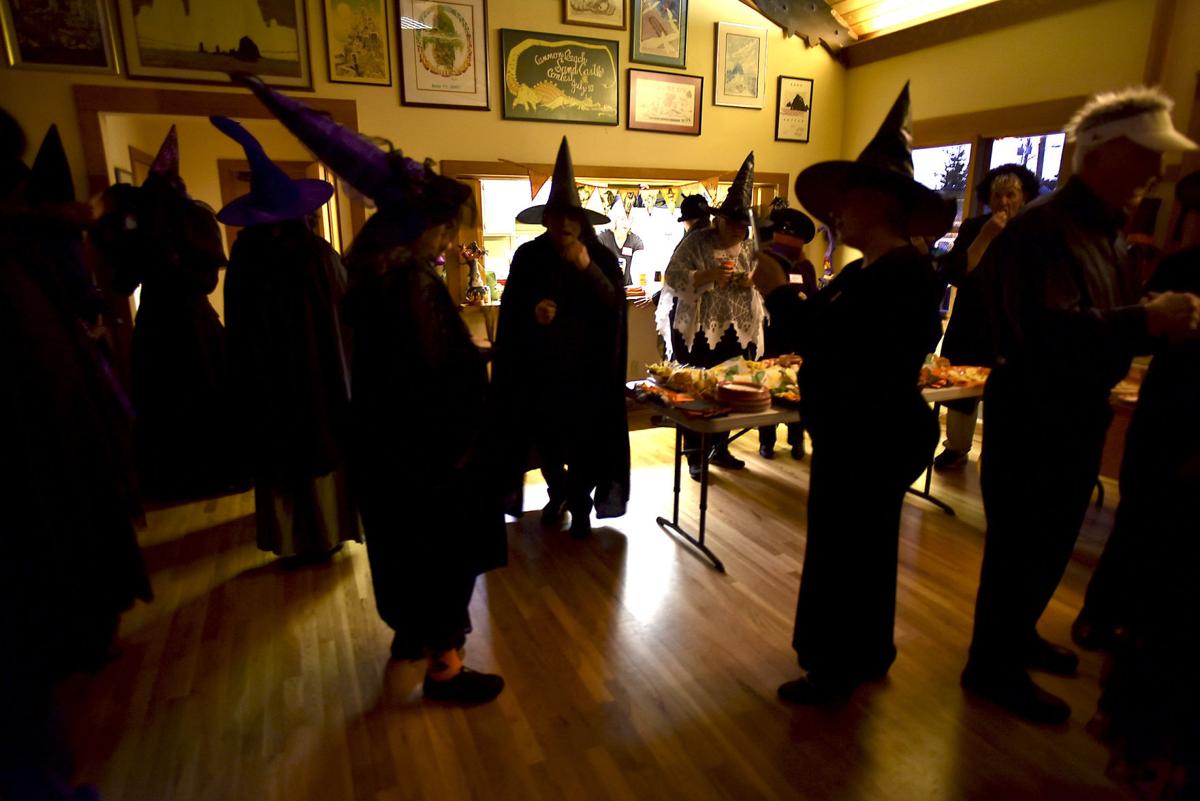 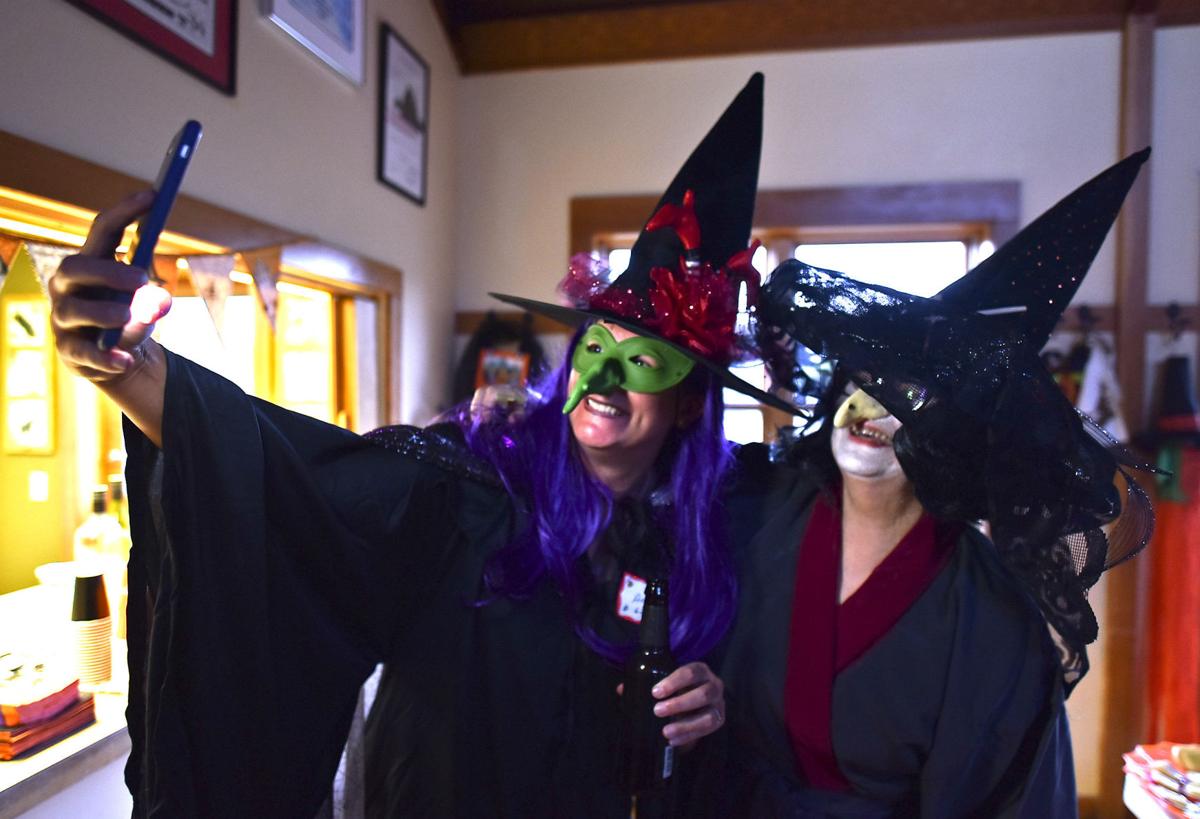 Taking selfies was a popular activity during the Halloween party in Cannon Beach.

Dozens of people gathered at the Cannon Beach Community Hall dressed up for the annual Halloween event.

A young attendee at the annual Halloween event in Cannon Beach adjusts part of his costume.

Most of those in attendance at the Halloween event in Cannon Beach came dressed as witches.

Henry Ryan was just one of many people dressed up for an annual Halloween event in Cannon Beach.

One partygoer in Cannon Beach arrived dressed as Glinda the Good Witch from the ‘The Wizard of Oz.'

Taking selfies was a popular activity during the Halloween party in Cannon Beach.

Lucia, named after St. Lucia Day, flew in from Sweden. Snuffy the candle snuffer was brought in a box from a friend. Amelia Bedelia has been with her for 17 years, but doesn’t get around the way she used to since her batteries died and her wheels locked up.

The 365 witches that hid in every nook and cranny of the Cannon Beach Community Hall Saturday, Oct. 14, represent 40 years of family, friends and memories. Each one of the eerie creatures has a nametag and a story, and for more than 20 years, Feldmeier would bring them out for the annual Halloween party she hosts.

But this year, Feldmeier decided it was time for the coven to disband.

“It’s gotten overwhelming. These were all in my attic at my little house on Jackson Street,” she said. “I tried to find someone who would take all 300 or so, but that turned out to be easier said than done. So I’m giving them away.”

Feldmeier always has had a love for Halloween. Early in her life she remembers celebrating the holiday with her family in Iowa, throwing corn on people’s porches or dressing up in parades. Her family’s extravagant and festive outdoor decor was even featured in the local paper in Davis, Calif.

She instilled her love for Halloween into her own family, who she said have all inherited “the witching gene.” In the early days, she would pick up the occasional witch here and there. One Sunday she invited friends to a spooky breakfast with witches on display, and ever since her “witch parties” have mushroomed into large neighborhood affairs.

“It kind of just fed on itself. Everyone who ever saw a witch would bring them to me,” Feldmeier laughed.

There’s not a specific reason as to why she loves witches more than other Halloween staples, other than seeing them as “funny” with a “sense of mystique.”

To Feldmeier, witches are a universal symbol representing years of travel and memories.

“The concept (of witches) is universal. Most countries have some form of witch,” she said. “I will travel to other countries and try to explain what I’m looking for, and in different languages they usually get the idea after I describe the broomstick.”

Her guests are as diverse as the witches themselves. About 75 family members, neighbors and old friends fly in on their broomsticks each year from all over for Feldmeier’s party — some as close as her next-door neighbors, others as far away as Australia.

Ruthie Leonelli, a Cannon Beach local, remembers back in 2000 when Feldmeier first knocked on her door to invite her to a witch party, and has been coming every year since.

“She’s different. She’s outgoing. She brings out the best witch in all of us,” Leonelli said.

There’s some sadness in the fact this will be last big witch party with all 365 present, but Leonelli said what makes these events special is far from ending.

The witch party isn’t the only way Feldmeier brings the neighborhood together. Her other local claim to fame is as the head of Cannon Beach’s “chair brigade,” a mainstay in the Fourth of July parade.

“There is more to this than the witches,” Leonelli said. “Sure, we first got together for the witches, but we’ve all grown to have very special relationships because of Helen. She makes the neighborhood.”

As partygoers started taking the witches one by one, Feldmeier said the feeling was bittersweet.

“You know, I’ll tell you the real reason I chose to do it this way,” Feldmeier said, referencing her choice to give them away to family and friends. She twisted a knob on the back of one of her witches, who started to sing the song “Ding Dong! The Witch Is Dead.”

“I remember visiting Salishan with one of my favorite cousins, and my cousin’s wife called me over and said listen to this — you know, the song. She said ‘We could play this at your funeral,’” Feldmeier said. “I guess I got to thinking I shouldn’t wait to have everyone take a witch at my funeral. Instead they can take them now.” Anne Ryan, Feldmeier’s daughter, has seen the important role the witches have played in her mom’s life. She has contributed many witches herself to the collection, which represent moments the two shared together.

While Ryan said she also has developed an intense love for Halloween and witches, she was not ready to take on the responsibility of housing a whole coven.

“She knows every story, every name of each witch,” Ryan said. “These witches are her history. That’s why she couldn’t just give it away to someone who didn’t care about it. They are such a large part of who she is.”