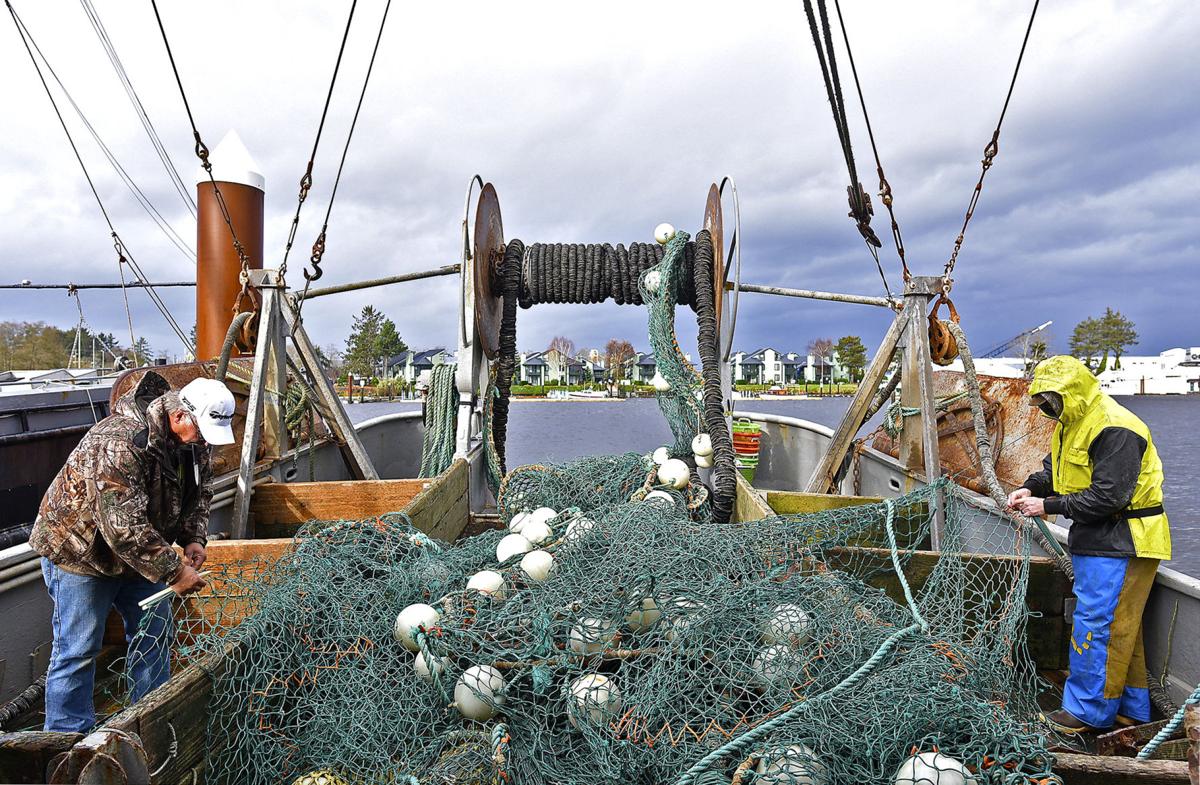 Dave Strickland and Troy Malcolm repair equipment on board the fishing vessel Ashlyne at the Warrenton Marina. 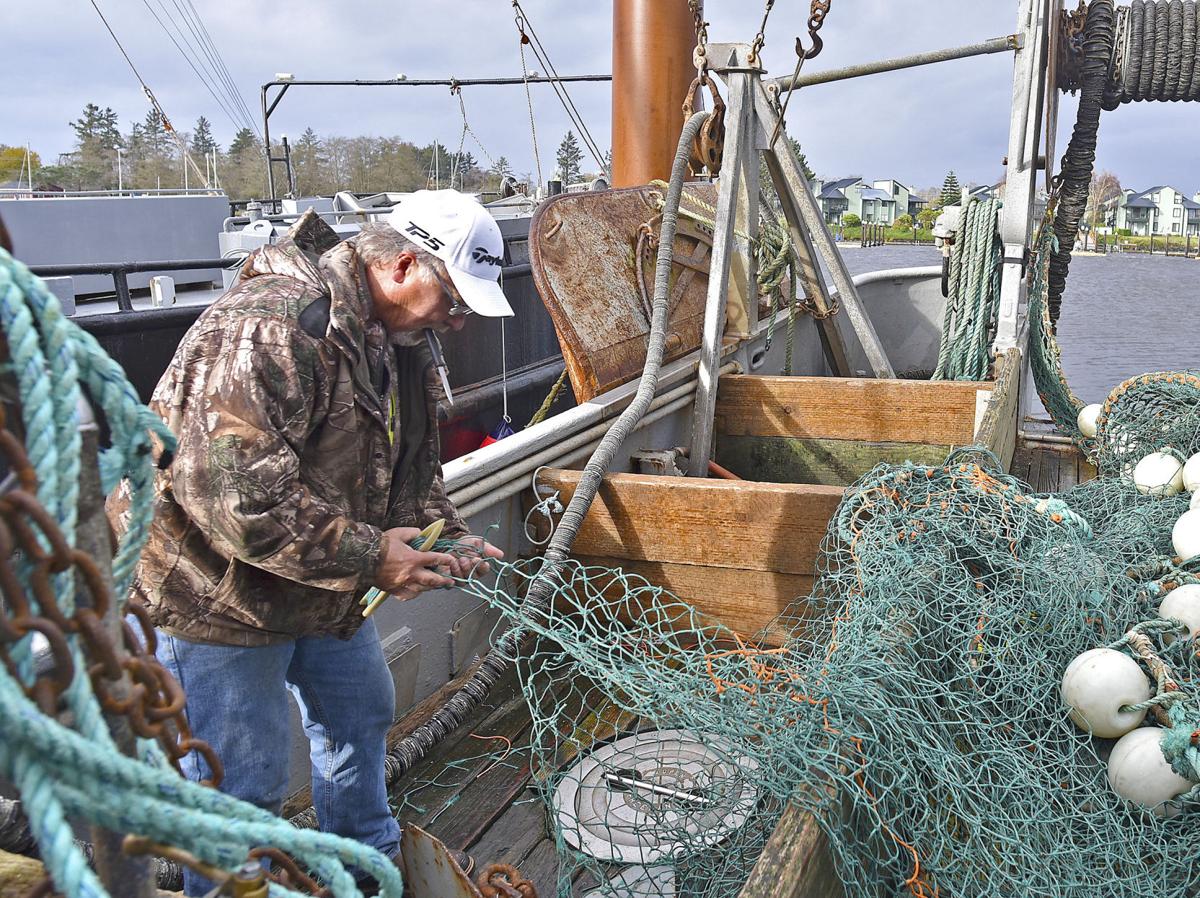 Dave Strickland repairs fishing equipment, work that he said many new crew members are either unwilling or unable to perform. 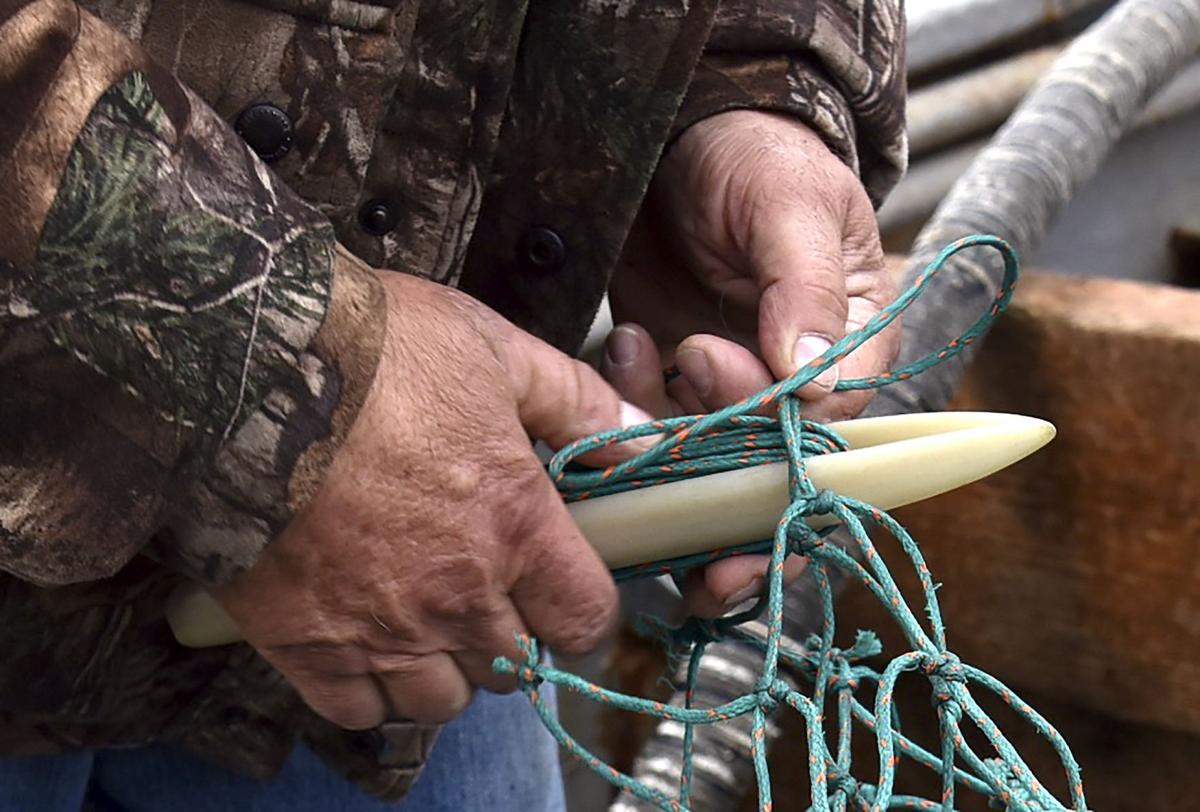 Dave Strickland fixes a net on board the fishing vessel Ashlyne while docked at the Warrenton Marina. 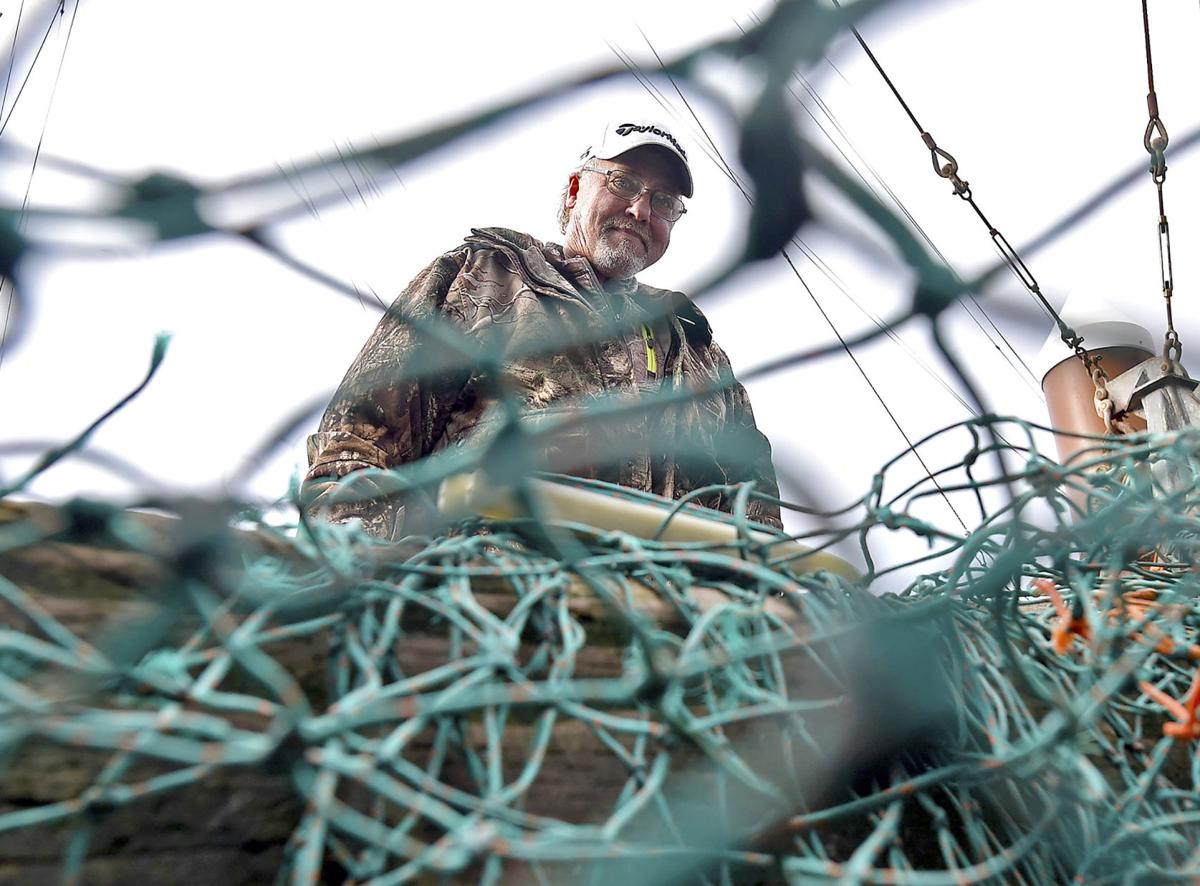 Dave Strickland seen through netting being repaired on board the fishing vessel Ashlyne at the Warrenton Marina. 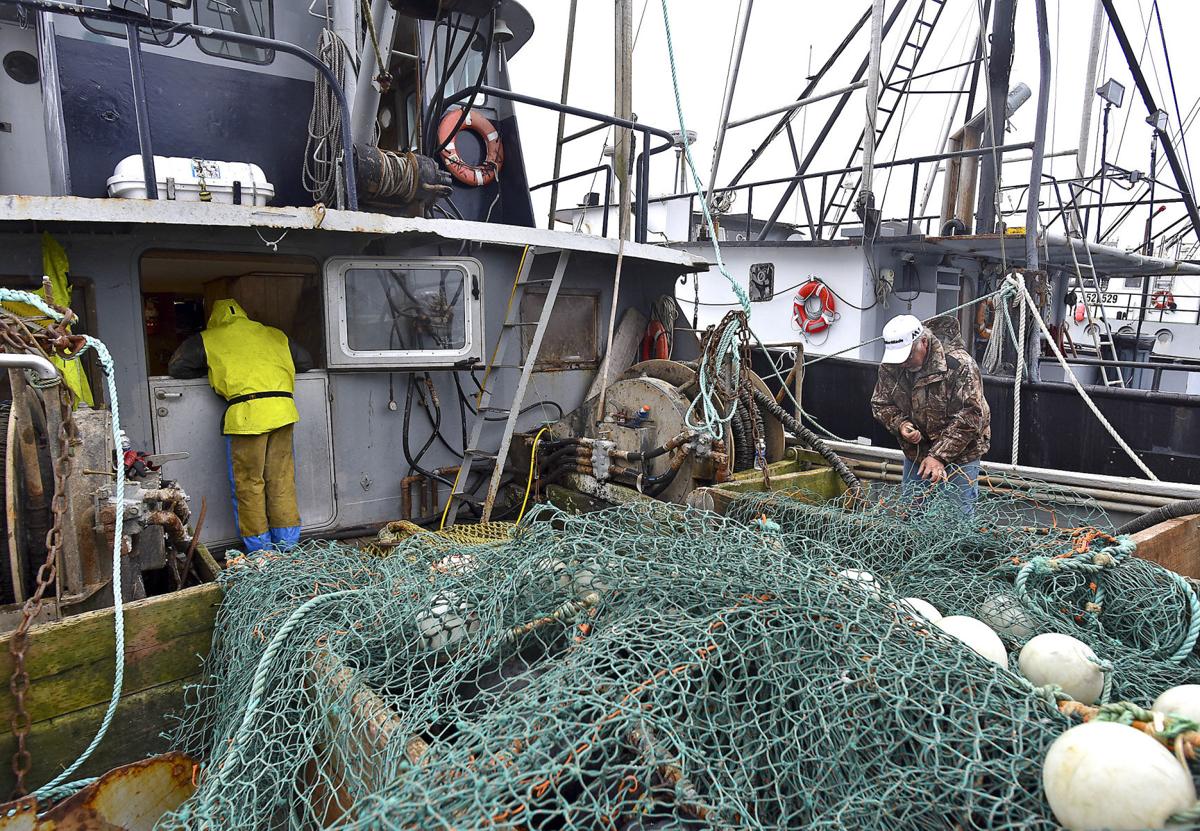 Troy Malcolm and Dave Strickland work on equipment in preparation for the next fishing excursion on board the Ashlyne at the Warrenton Marina.

Dave Strickland and Troy Malcolm repair equipment on board the fishing vessel Ashlyne at the Warrenton Marina.

Dave Strickland repairs fishing equipment, work that he said many new crew members are either unwilling or unable to perform.

Dave Strickland fixes a net on board the fishing vessel Ashlyne while docked at the Warrenton Marina.

Dave Strickland seen through netting being repaired on board the fishing vessel Ashlyne at the Warrenton Marina.

Troy Malcolm and Dave Strickland work on equipment in preparation for the next fishing excursion on board the Ashlyne at the Warrenton Marina.

John Corbin remembers tent cities in Alaska in the 1980s during the booming king crab seasons. The commercial fisherman said upward of 50 guys a day would walk the docks looking for work. Those days are gone.

Next year, Corbin and others in the fishing industry plan to do something they wouldn’t have considered during the boom years: They’re going to start attending high school job fairs and actively recruit the next generation of fishermen and women.

Across the industry, businesses have struggled to attract new employees. Clatsop County seafood processors say they need to hire more people, but can’t seem to get anyone through the door.

“Whether fishing’s lost its luster, or what it is, we just don’t have the people looking to get into this business as much as we used to,” said Corbin, who serves on the Oregon Dungeness Crab Commission.

Fishing remains a highly lucrative career, the industry argues. At the same time, regulations and demographic shifts in coastal communities have changed what is and isn’t possible for young fishermen.

In Clatsop County this year, restaurant owners to contractors reported trouble finding employees. Help wanted signs were on display in many shop windows.

The struggle to find crew for a commercial fishing boat is not a new dilemma. What is new for Oregon and Washington state fishermen is the landscape of regulations and barriers — real and perceived — to entry, along with the loss of some incentives. The people themselves, and the kind of work they’re willing to take on, also appear to be changing, captains say.

“The graying of the fleet” is a phrase that has resurfaced every few years for several decades now, referring to aging captains and crew and few new, young fishermen lining up to replace them. Studies conducted by social scientists with the National Oceanic and Atmospheric Administration in the last ten years have noted barriers to entry that can make jumping into a fishing career more daunting — and less feasible — than it was in the past. Kevin Dunn, a trawler, explained that the costs of running a boat and fishing have gone up, while the ex-vessel value — what fishermen receive for their catch — has remained stagnant.

Some permits are harder to obtain now. In fisheries with fishing quotas attached, many fishermen hold on tight to their quota, making it difficult for new entrants to even get on the water. Some of the traditional channels for new fishermen are closed or closing. Gillnetting, for example, used to be an easy way to get started on the Columbia River. The gear can be fished by a single person and the initial, upfront investments were relatively low. Now, the gear itself has spent years under intense scrutiny with legislation to move gillnets off the river’s main stem entirely.

Fishing — a job based around resources that live in environments in constant flux — has always been a high-risk job. To Dunn, it seems that more people make their calculations and decide the risk isn’t worth it.

“There was maybe a day when you could say, ‘Hey, I want to do this and eventually buy a boat,’” Dunn said. “It’s just a dream anymore.”

Fishing is also a field that ends up more of a calling than anything else, many fishermen say.

“It’s a hard job,” said Hugh Link, executive director of the Oregon Dungeness Crab Commission. “It’s very fulfilling if you get into it and you’re good at it — and you tough it out.”

“You usually either love it or you hate it and there’s not much in-between ground,” Corbin said.

In the late summer and early fall, posts start to proliferate on a Facebook page for West Coast commercial albacore, tuna and salmon fishermen. Captains write that they’re looking for crew. People looking for crab boats to work on post to the group’s main page and list their qualifications, or lack of.

Craigslist ads go up around the same time. The ads and social media posts get passed around, friends tag other friends. Sometimes a successful hire results. Or sometimes people just bicker and joke in the comments.

The internet — particularly Craigslist and social media sites like Facebook — has become one way captains find crew and potential crew find captains, but it hasn’t replaced word-of-mouth as the most reliable, and often preferred, method.

Commercial crabber Brian Boudreau prefers to hire guys he knows, or who know people he knows. As long as he has one experienced crew member, though, he doesn’t mind hiring someone who doesn’t have experience. In fact, he’d almost prefer someone without experience over someone who has been on a hundred boats and thinks they know everything.

In Boudreau’s opinion, reality TV shows about the industry have overstated the workload, the boasts of 70 hour days. Still, the longest stretch he can recall without much of a break was 54 hours long. It certainly isn’t the job for everyone, he said.

“It comes and goes,” Dunn said. “It seems like you cruise along with the same crew for a while … then the tax man gets them, or drunk driving, and then all of a sudden you have a problem.”

One of his crew members has been with him for seven years now. Dunn consults with him when it comes to selecting a new crew member to make sure it will be a good fit, but a new hire really only needs to know “up from down,” Dunn said.

“I would like somebody who will not get seasick,” he said. “The rest is teachable.”

For untested — “green” — crew there’s no easing into the work. Once you step on board a boat, you have to be ready to go.

“There’s no working at half speed until they get the hang of it,” Corbin said.

But both Corbin and Dunn note that recently they’ve had new crew members who just gave up after experiencing the workload, quitting right there on the water.

“I do think there’s a different breed of people now,” Dunn said. “In all my years of working, I never heard of someone saying, ‘Nope, I’m done.’ You take a new guy out and at the end of 18 hours, he wants time off. Well, that’s not the way it works in this industry.”

To Link, Corbin and others, fishing remains a viable career option.

In August, Gov. Kate Brown signed a bill into law that will create a task force to focus on maritime sector workforce development. The Oregon Dungeness Crab Commission worked with the committee that presented the bill. Eventually, the law will make it so maritime jobs from fishing, working on tug boats to maritime construction have a classification, opening up other resources from the state’s employment division to people and employers in maritime fields.

As Link looks ahead toward high school job fairs, he knows fishing jobs may not be on every student’s radar. But, he said, “They need to know about these opportunities, and I don’t think it’s the first choice for everybody right away … unless it’s in their family.”

He points to people like Corbin who have turned it into a career.

“I think people might have their own impressions of what working in a fish plant or working on a fishing boat is, but we want to teach them the real-world experiences,” he said. “It can be a family wage job and it can be very rewarding for somebody to get this opportunity.”