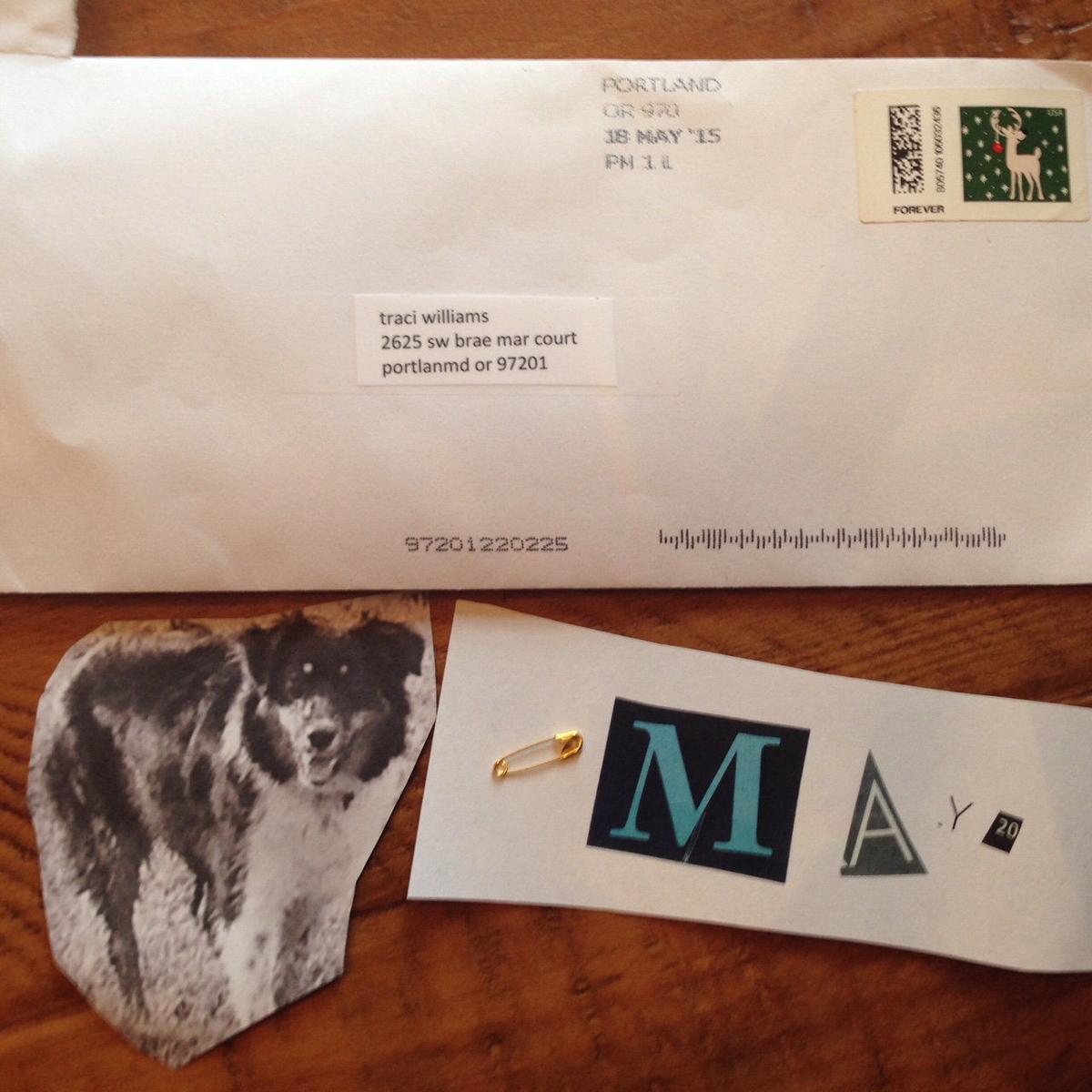 Correspondence received by Traci Williams. A cut-out of her dog made her fear for the animal's safety. 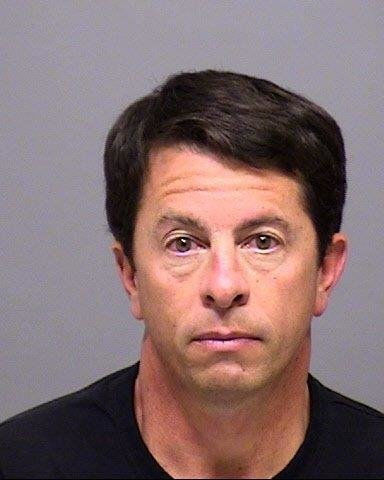 A 2006 mug shot of Douglas Greenberg. 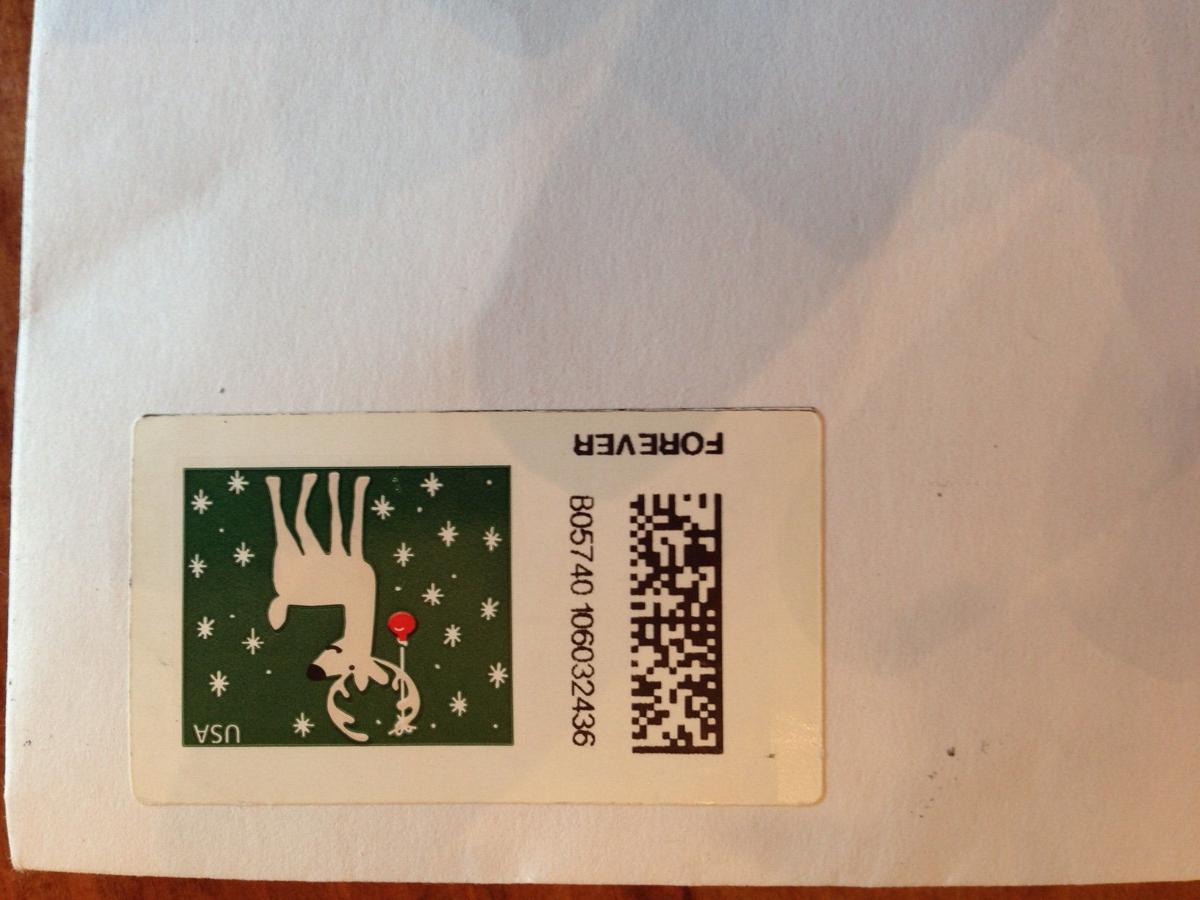 A stamp on a letter allegedly threatening Traci Williams was determined by law enforcement officials to have been sent from a Morgan Stanley account. 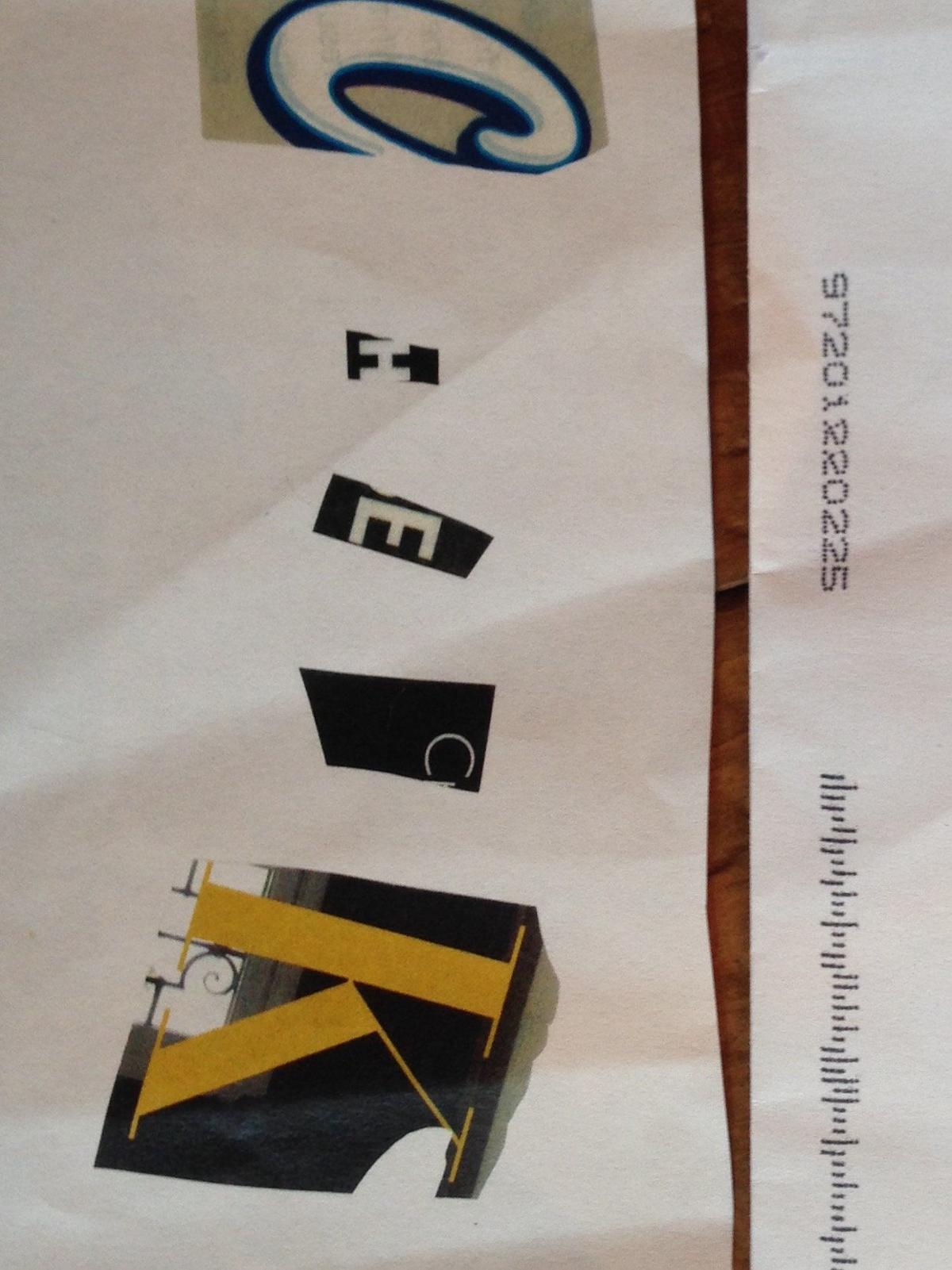 Correspondence received by Traci Williams alleged to have been sent by Douglas Greenberg. 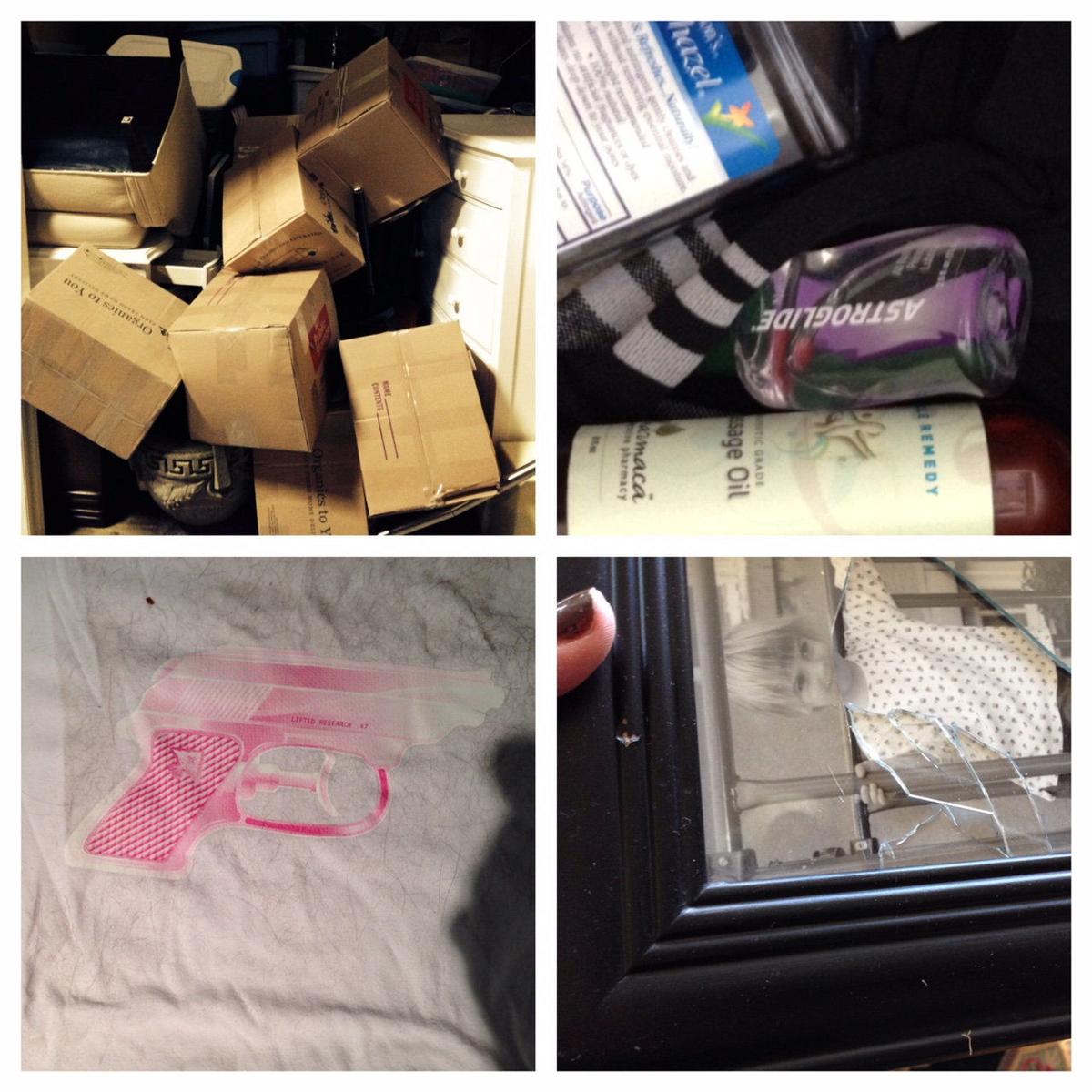 Material sent to Traci Williams, including blood and cat hair. 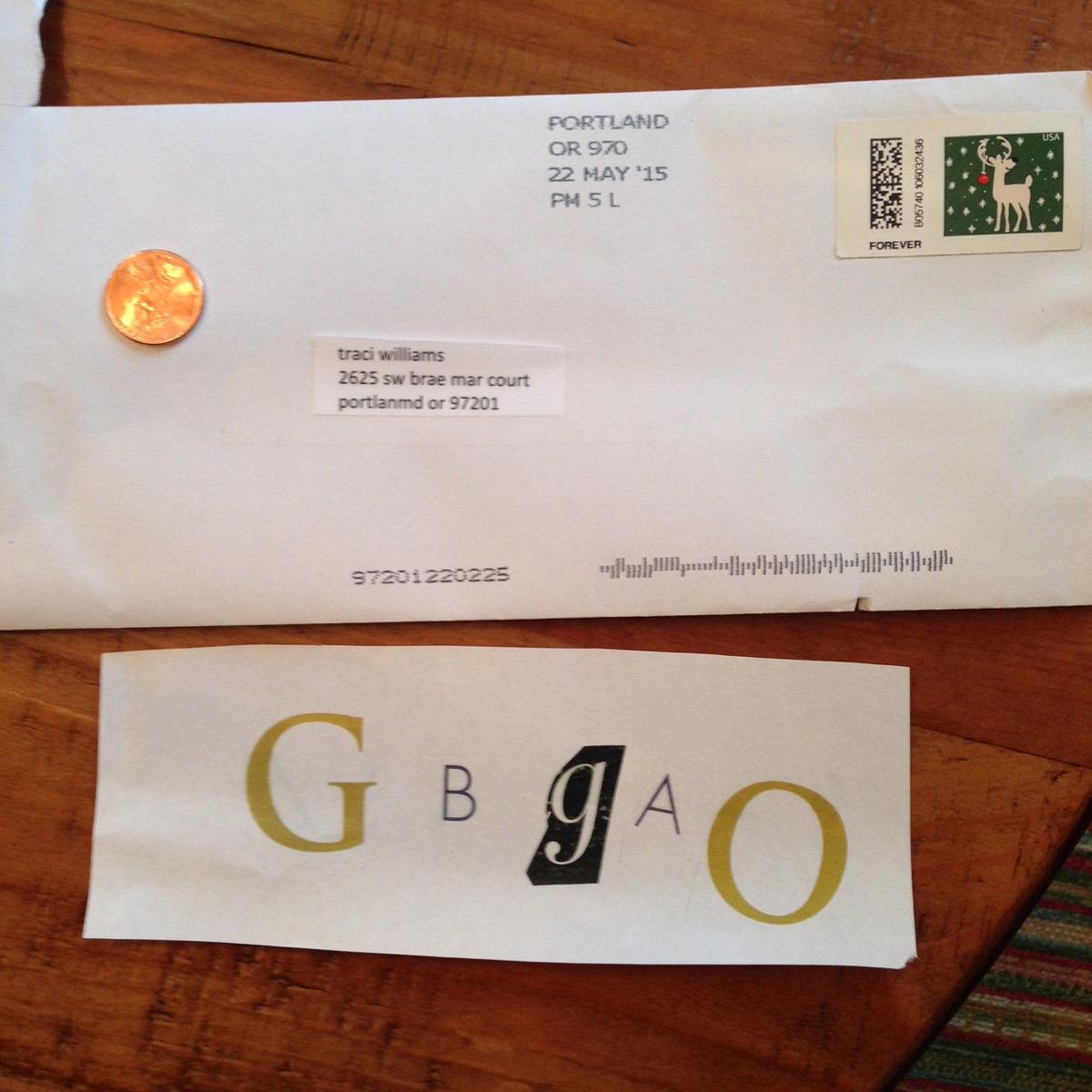 Correspondence received by Traci Williams after her separation and subsequent divorce.

Correspondence received by Traci Williams. A cut-out of her dog made her fear for the animal's safety.

A 2006 mug shot of Douglas Greenberg.

A stamp on a letter allegedly threatening Traci Williams was determined by law enforcement officials to have been sent from a Morgan Stanley account.

Correspondence received by Traci Williams alleged to have been sent by Douglas Greenberg.

Material sent to Traci Williams, including blood and cat hair.

Correspondence received by Traci Williams after her separation and subsequent divorce.

GEARHART — When Traci Williams came to Gearhart in 2016, she was literally running for her life.

It was a last-ditch effort to get away from abuse and stalking. She bought a closed-up ice cream parlor across from the post office and within eyesight of the police station. From her shop windows she can see all four corners of the tiny downtown.

She quickly worked to renovate the building and reopen as an ice cream, coffee and wine shop. It was very important to her and her children, who both work for her. It was a success from the start, a little gathering place often packed with happy children and adults.

She didn’t tell many people why she came here. Her friends knew.

Then on Thursday, Williams’ story was published on the front page of the The New York Times. The newspaper recounted years of abusive behavior by Morgan Stanley financial adviser Douglas E. Greenberg against Williams and three other women.

The interest in her story came “out of the blue,” she said. She was ready to move on when she was contacted by reporter Emily Flitter.

The Times story was originally supposed to be more about the #MeToo movement and banking in general, Williams said.

“But when the reporter came and dug in, they decided to narrow it down and focus on him (Greenberg), because the story was compelling in terms of the facts. It’s all documented. I thought, maybe if I tell people, maybe I can get some of my sanity back.”

After the account went viral, Williams closed her shop on Thursday for the day to deal with the fallout. She’s received nonstop media calls since the story appeared, she said.

“This is an ugly story,” Williams said Friday. “This is not how I wanted to be defined. But it’s what I’ve been living. It’s why I’m edgy and jumpy and why my son has PTSD and I have PTSD. I am changed forever.”

Williams met Greenberg on a blind date in 2007. She was a public relations go-getter and he an all-star at Morgan Stanley in Portland.

“He seemed really nice and fun, like he had his act together,” she said. “He took me to his office on our third date.”

They married in 2008, blended families and lived a seemingly storybook life among the wealthy and the well-heeled of Lake Oswego, but the reality was anything but.

In the five years of their marriage, Williams “was choked, smothered, shoved, pinched and pinned down” by Greenberg, she said. She stayed because he would apologize, promise to get help, and there were periods that life was fun. That is the cycle of abuse she learned more about after she got away.

Greenberg escalated his erratic behavior, she said, while maintaining a high-flying career as an executive director and wealth adviser at Morgan Stanley.

Greenberg’s rage extended to her own children and pets, she said. She knew it would be hard to leave the marriage, “but I didn’t know how hard it would be.”

Greenberg’s prominence provided him a free pass. As a “big fish,” he became even more abusive.

“Lake Oswego, it was the perfect little neighborhood,” Williams said. “No one wanted to speak up because no one wants to get involved. There’s this illusion that everything is perfect and pretty.”

After five years, she made the decision to leave. “He was going to kill me and described in detail how to my face.”

Williams consulted an attorney, who advised her to leave Lake Oswego for good. She hid out with her children and dog along the Oregon and Washington coasts. They were on the run for almost a month before returning to Portland.

“I think the fines got to be $120,000 because every time he violated it, he didn’t care, they would just add on a fine,” Williams said.

Greenberg was so threatening, she fled her house more than 10 times in a six-month period, Williams said. She would receive threatening letters, messages, emails and calls, including one reading “I CAN SEE YOU,” made up of letters cut out from magazines.

“When a picture of my dog arrived in the mail, police said, ‘We think you should leave,’” she added. “They told me not to let the dog out in the yard.”

She filed complaints with Morgan Stanley management in Portland and San Francisco without response.

“By propping up someone and continuing to promote them, what they’ve done is enable him to collect more victims,” she said.

After leaving Greenberg, Williams tried to rebuild her life and a career in Portland, joining a startup tech firm as their head of public relations.

After attending classes and a workshop, she started volunteering as an advocate for survivors of domestic violence and was appointed in 2014 to the governor’s domestic violence task force. Ironically, she said, she couldn’t prevent her own abuse.

In 2015, everyone at her new company was sent threatening email from an anonymous account using an alias.

“I felt like I lost every single thing,” Williams said. “All my sanity, all my peace of mind, my personal health really took a beating, my ability to move around, and to have a sense of freedom.”

She became the person “shunned in the grocery store,” she said.

Before that, she was friendly and outgoing, the one who hosted the dinner parties, helped run the auctions and head committees. “Then I rarely got invited anywhere. I lost a lot of friends. Everybody wants to hear your story once and then they say, ‘We’d rather not.’ And I have friends who are afraid Doug might do something to them.”

The alleged stalking and harassment continued.

Investigators told Williams they were able to track a 2015 “creepy serial-killer letter” sent to Williams to a Morgan Stanley credit card account accessible by Greenberg. “But Doug was crafty and hard to pin down,” she said.

Portland police pursued the case for about six months before the federal government was contacted, she said.

After a trip to Gearhart in 2016, she decided to reshape her life. “I just thought, ‘What do I have to lose?’”

“A girlfriend invited me to her brother’s beach house in Gearhart, and my friend said, ‘You should buy the old Pop’s and turn it into a wine bar.’”

So she did, hoping the plan might be the “perfect out.” Just in case, she installed nine video cameras around the perimeter.

Her remaining friends have been a supportive group, helping her start a business that wasn’t what she was trained for or expecting.

“One of my friends from Lake Oswego got me up and running with the wine and beer part,” she said. “Others helped me learn ice cream, merchandising. New friends here in Gearhart have been really embracing of me and my family.”

Only after the story broke last week was Greenberg put on administrative leave. Greenberg is still tweeting from his Morgan Stanley account, Williams said.

She still suffers from “constant fear,” although “a little less” after the Times story.

Williams has hired Portland attorney Sean Riddell and is “exploring all my legal options at this point.”

“Gearhart is my little getaway. Yesterday I walked the beach for two hours. It’s fun for me when kids come in (to the shop), and I have a distraction. The buzz in here is good and fun and I think that is a good thing for me.”

Requests for comment by The Daily Astorian to Morgan Stanley and Greenberg were not answered.

Morgan Stanley spokeswoman Christy Jockle told the Times: “We are committed to maintaining a safe and professional work environment and will take appropriate action based on the facts of the matter.”