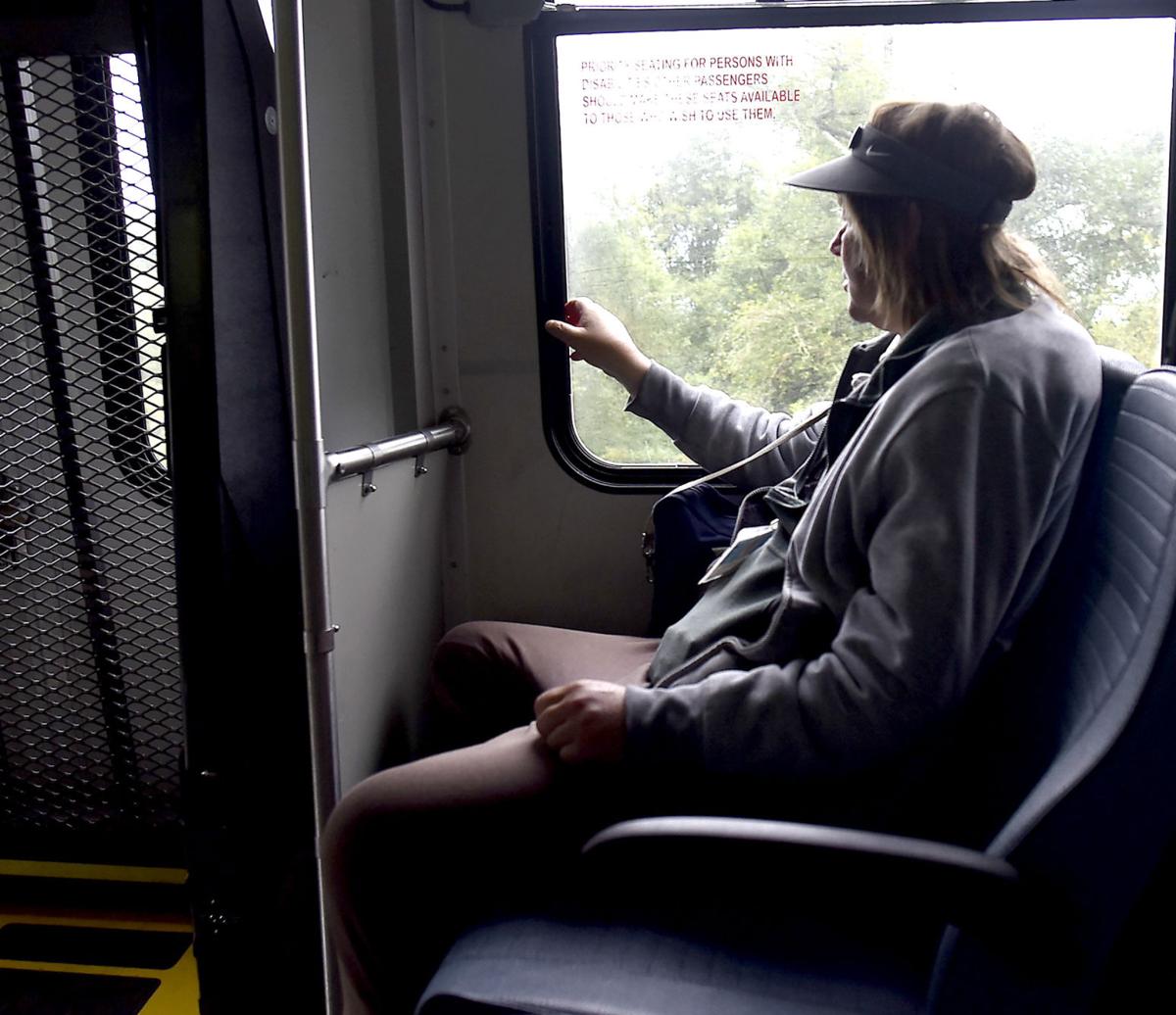 Kevin Widener rides the bus from Seaside to Cannon Beach. 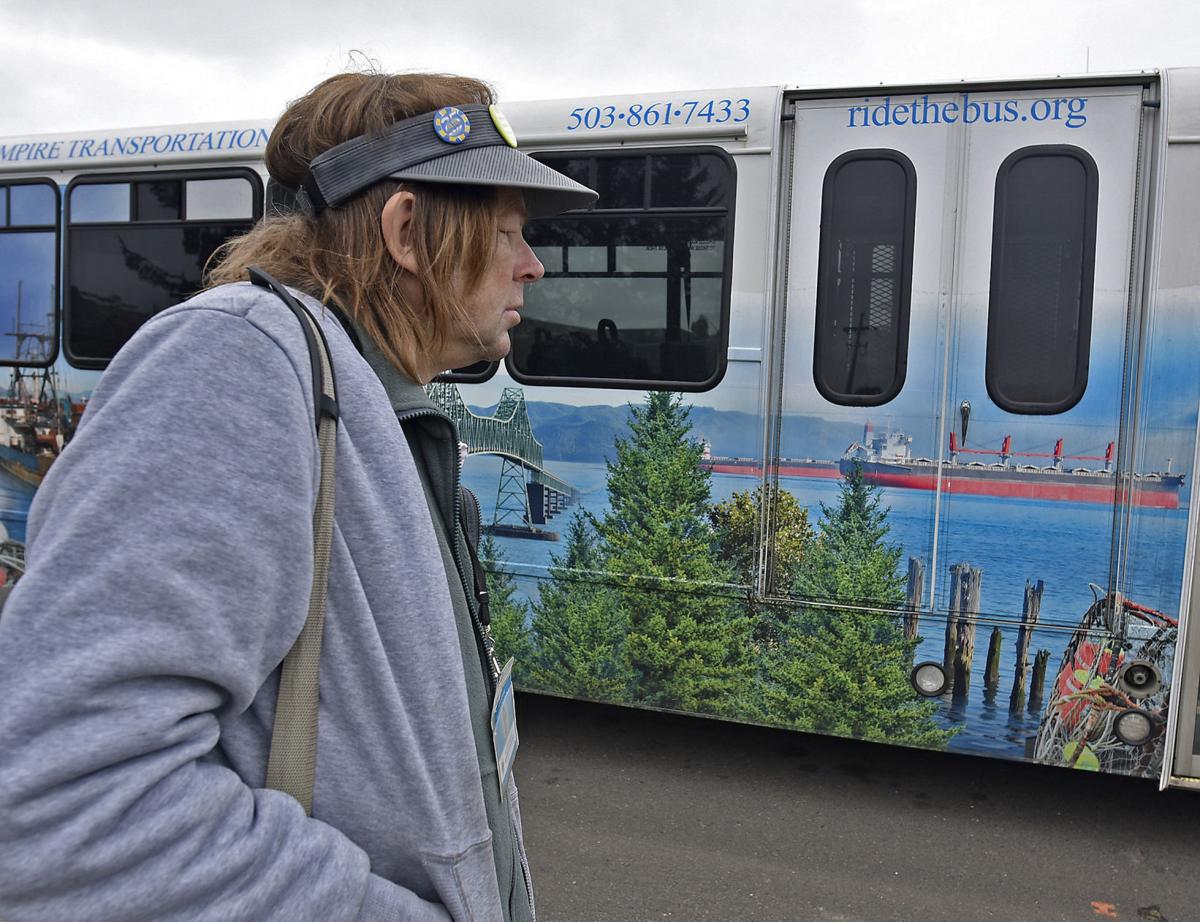 Kevin Widener's bus arrives at a stop in Seaside before heading toward Cannon Beach. 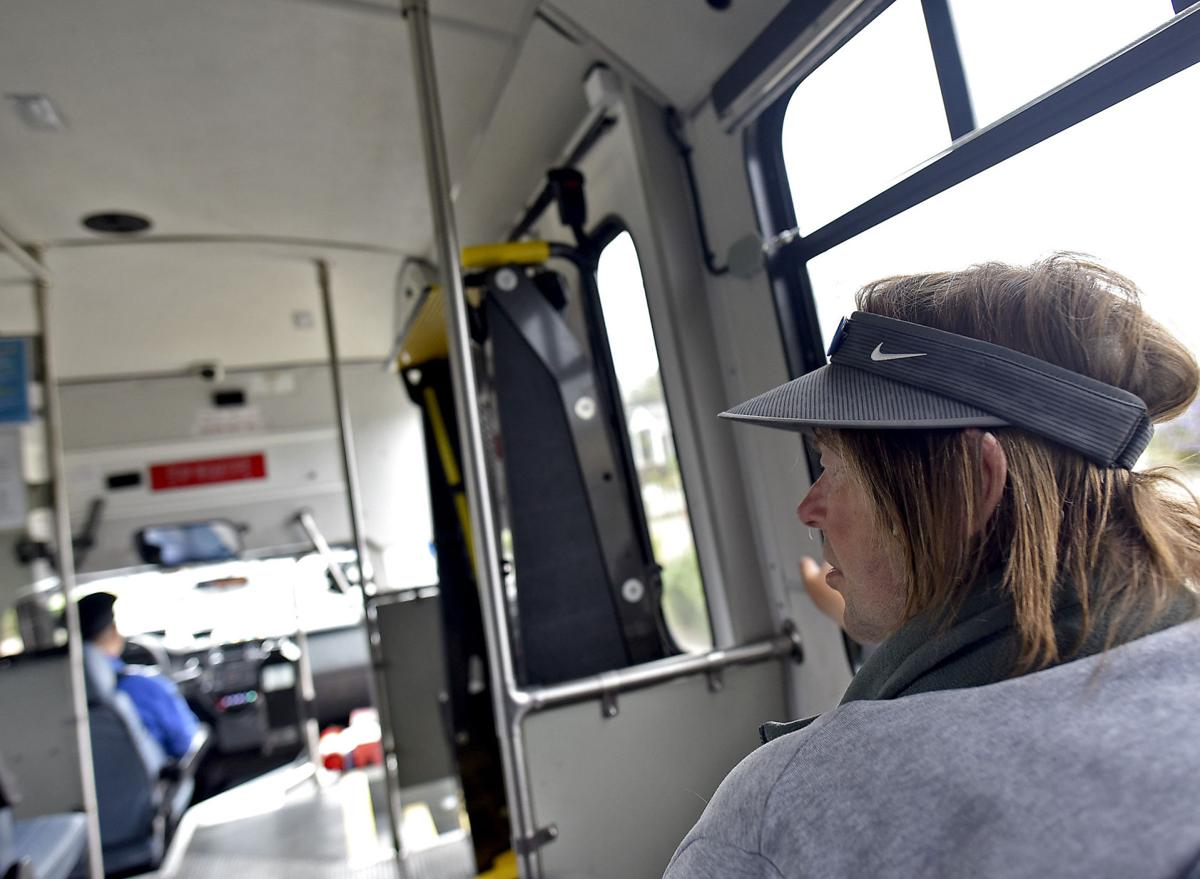 Kevin Widener rides the bus to Cannon Beach to pick up his mail and spend time at the library. 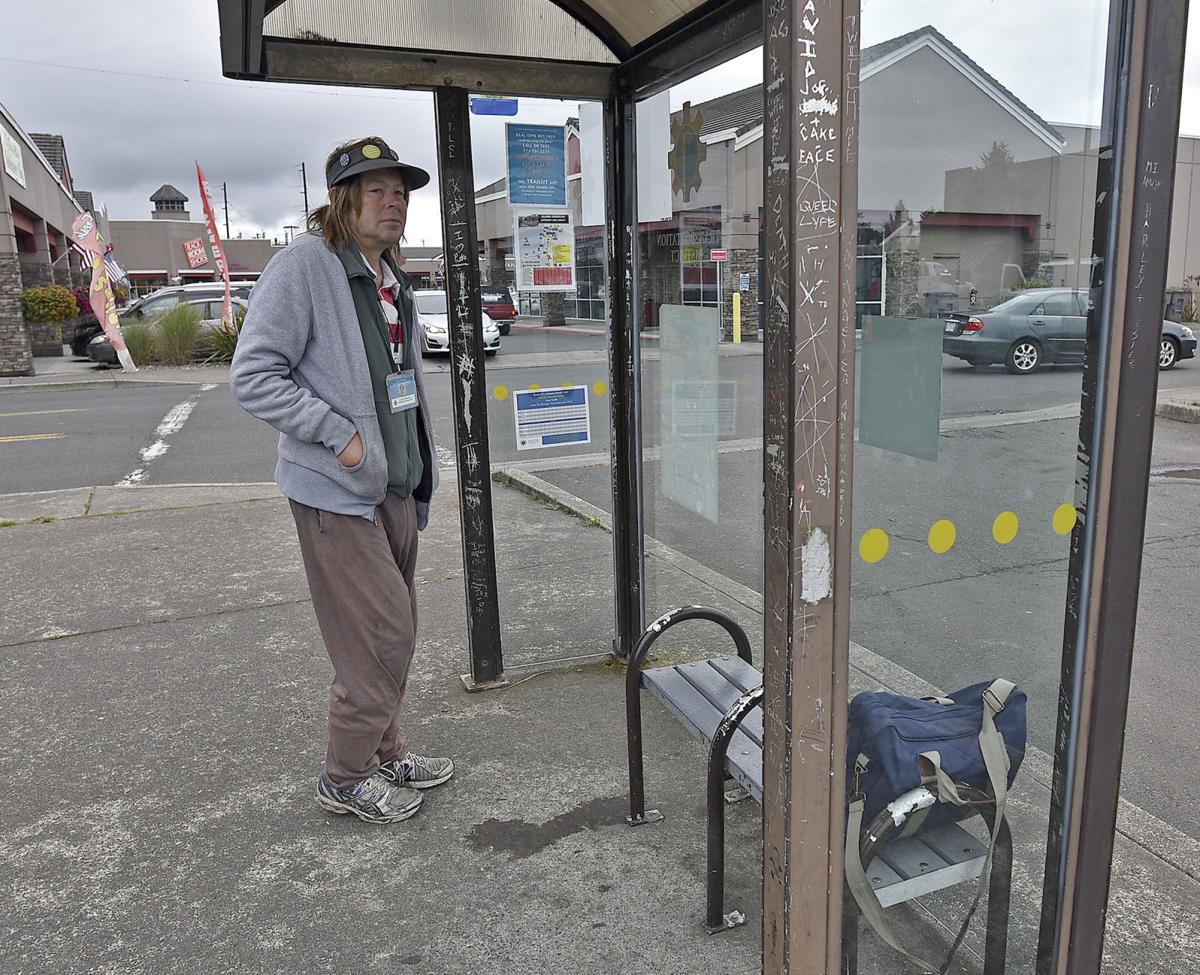 Kevin Widener waits for the bus to arrive at a stop in Seaside. 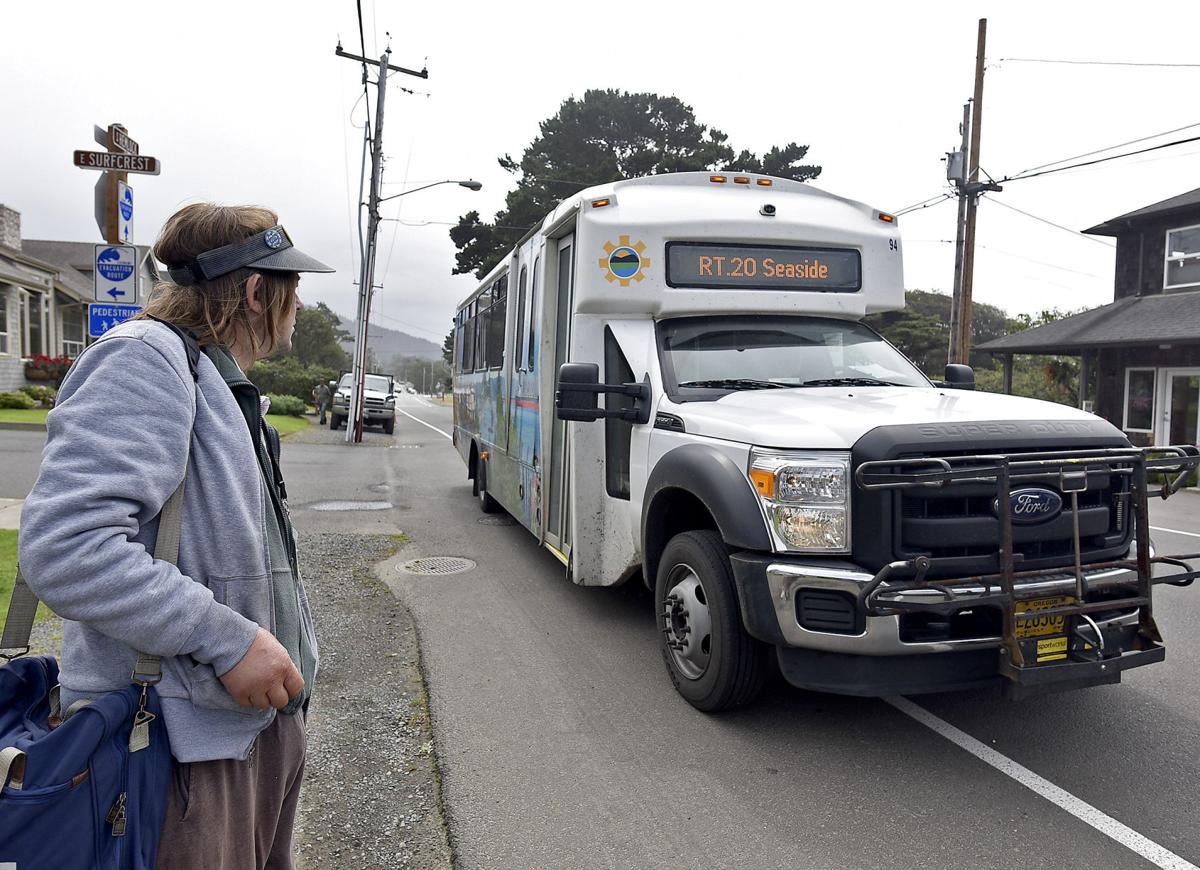 The bus arrives at a stop in Cannon Beach to take Kevin Widener to the library.

Kevin Widener rides the bus from Seaside to Cannon Beach.

Kevin Widener's bus arrives at a stop in Seaside before heading toward Cannon Beach.

Kevin Widener rides the bus to Cannon Beach to pick up his mail and spend time at the library.

Kevin Widener waits for the bus to arrive at a stop in Seaside.

The bus arrives at a stop in Cannon Beach to take Kevin Widener to the library.

Kevin Widener enjoys sitting on the Sunset Empire Transportation District board. It’s a role he’s well-suited for as a loyal bus rider himself, a fact he campaigned on when he was first elected in 2013.

But it would be a lot easier to serve if Widener had somewhere to live. For the past month, he has been homeless.

“It would just be nice to have an address in the county I represent,” he said.

Some of the difficulties are what one would expect.

“What’s difficult about preparing for a meeting?” he asked. “Not being able to take a bath and wash my hair when I don’t have a shower or hot water, is something.”

But perhaps what is most difficult, Widener said, is a sense of confusion over how he got to this crossroads in the first place.

“It’s a strange relationship,” he said. “Feeling like I’ve been able to help others and not be able to help myself.”

Originally from eastern Washington, Widener moved to Cannon Beach in 1975, where his father took a job as a teacher. After graduating from Seaside High School, Widener received an associate degree from Clatsop Community College.

For about 13 years, he lived and managed rooms at the Picture Window Resort in Cannon Beach before it closed in 2003. Out of a job and a home, Widener alternated between staying with friends and staying on the streets, struggling to find housing for the next three years.

Part of his struggles were due to what Widener referred to as a “worsening neurological disorder,” which has slowly affected his ability to walk, the strength in his left arm and other motor functions. Between the neurological disorder, an intensifying case of chronic obstructive pulmonary disease, and the side effects that come with the medications to treat it all, holding down a full or part-time job became increasingly more difficult.

It also marked the beginning of his reputation as a dedicated public transportation user.

“With all the medication and the neural problems, I just voluntarily gave (driving) up,” he said.

After three years of instability, Widener applied for disability and a low-income housing voucher, which allowed him to afford a small apartment in Seaside for about 12 years. There, he was able to manage a few apartments and collect cans for extra income.

Widener volunteered with a number of environmental groups — protecting the environment is one of his interests — and ran a campaign for the transportation district seat.

“I obviously ride the bus a lot, so I thought I could bring my perspective,” he said.

In March, an electrical fire drove Widener and his neighbors out of the apartment complex. Soon after, the owner sold the property.

The landlord, Ken Quarles, who had developed a relationship with Widener over 12 years and eventually served as his campaign manager, felt bad about the sudden upheaval. He decided to let Widener stay in a side room of another property he managed for a few months before the sale finalized.

“We all knew Kevin. And his dad was a much-loved teacher for us,” said Quarles, a longtime Cannon Beach resident. “All of us old-timers … everyone has just kept an eye on Kevin.”

Again finding himself in housing limbo, Widener has struggled to locate a place on the North Coast that his voucher can cover. When he does, he is often met with a waiting list six months to a year long.

What Widener is facing isn’t unique, said Todd Johnston, executive director of the Northwest Oregon Housing Authority. According to the U.S. Department of Housing and Urban Development, average fair market rent for a one-bedroom apartment in Clatsop County will be about $654 in 2019 — about a $200 difference from what Widener can expect for his voucher based on his fixed income.

“What’s happened with us with the voucher program is that the increase in rents has been outpacing the HUD voucher standard,” Johnston said. “Now voucher rents aren’t keeping up with the market.”

Widener isn’t particular about his next home.

“I don’t plan on being home most of the time anyway,” he joked.

Widener likes to stay involved, whether as a fixture at the local library or as a contributor to a City Council meeting, where he is known to always keep a close eye during budget season.

“As the one in charge of the meetings, I’ve always appreciated his comments. They’re often insightful,” Mayor Sam Steidel said. “He always comes at things with a different point of view.”

If Widener is not at the library or City Hall, he’s at the bus stop, where he is able to rattle off when the next bus will arrive without glancing at the schedule. It’s important for him to keep sharing his experience as a bus rider with the transportation district, as expanding public transportation is his passion and his lifeline.

“When I see situations where I can help, I help,” he said.