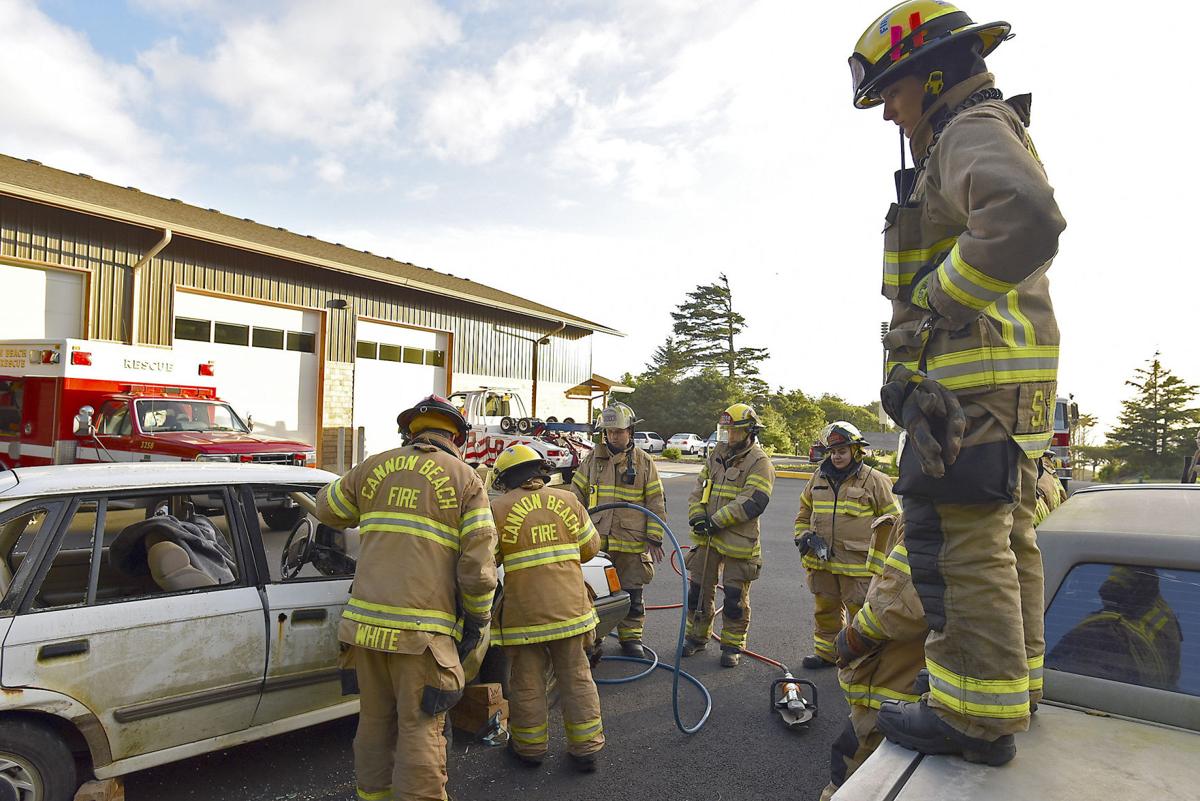 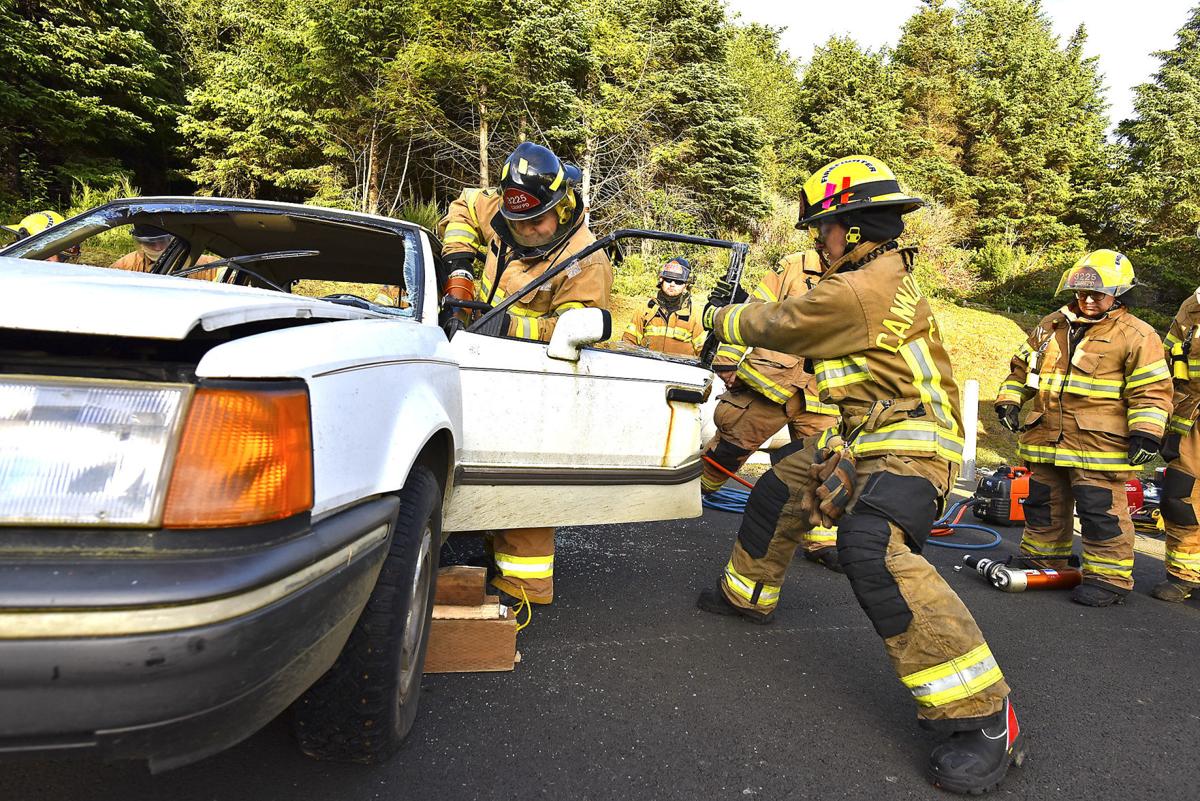 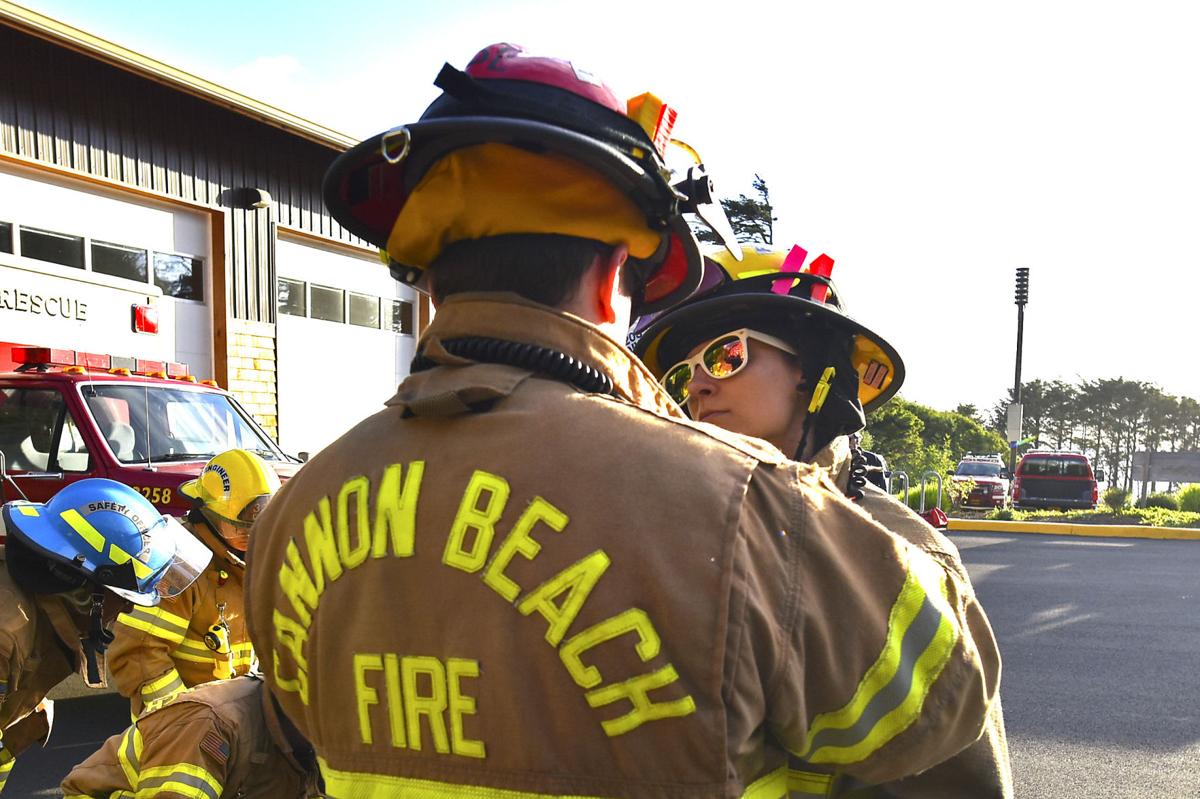 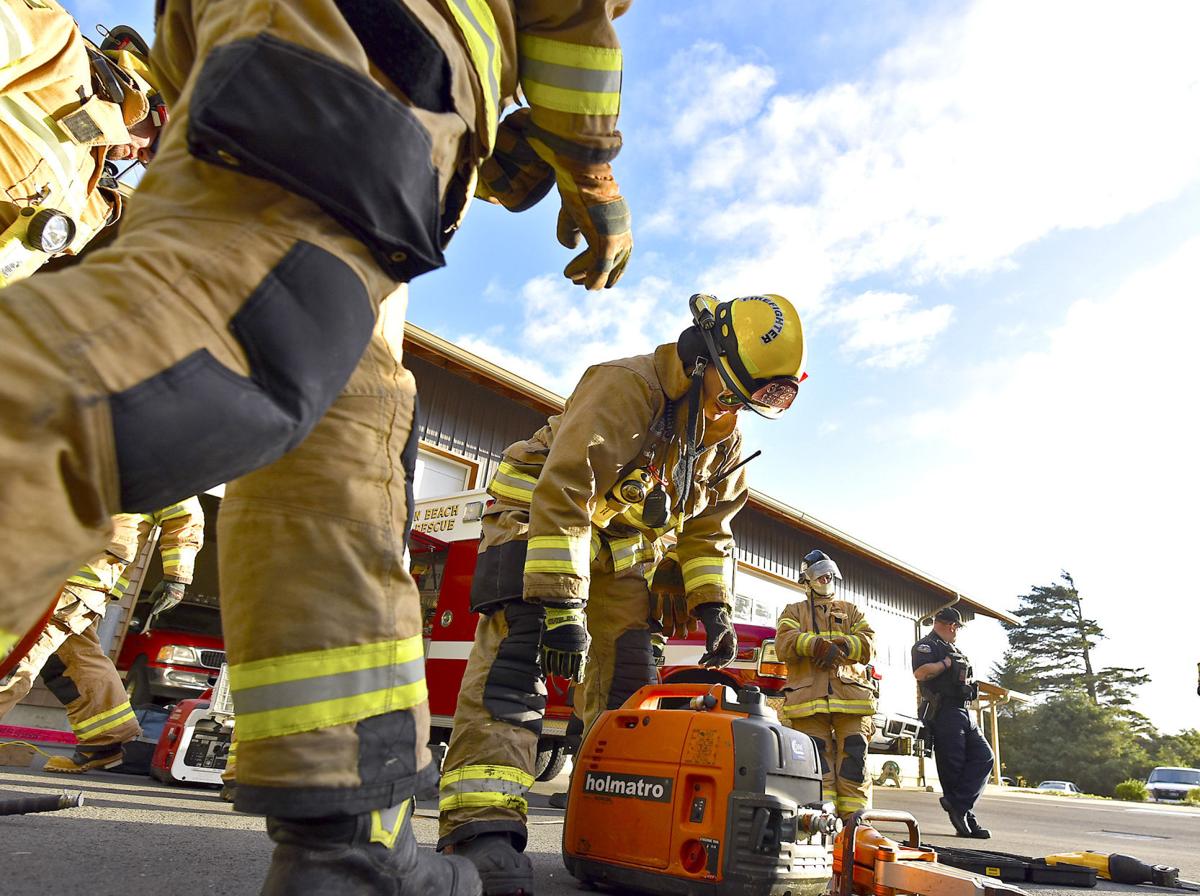 Shaunna White, center, along with her husband, TJ, not pictured, prepares to participate in vehicle-extrication training with the Cannon Beach Fire Department last week. 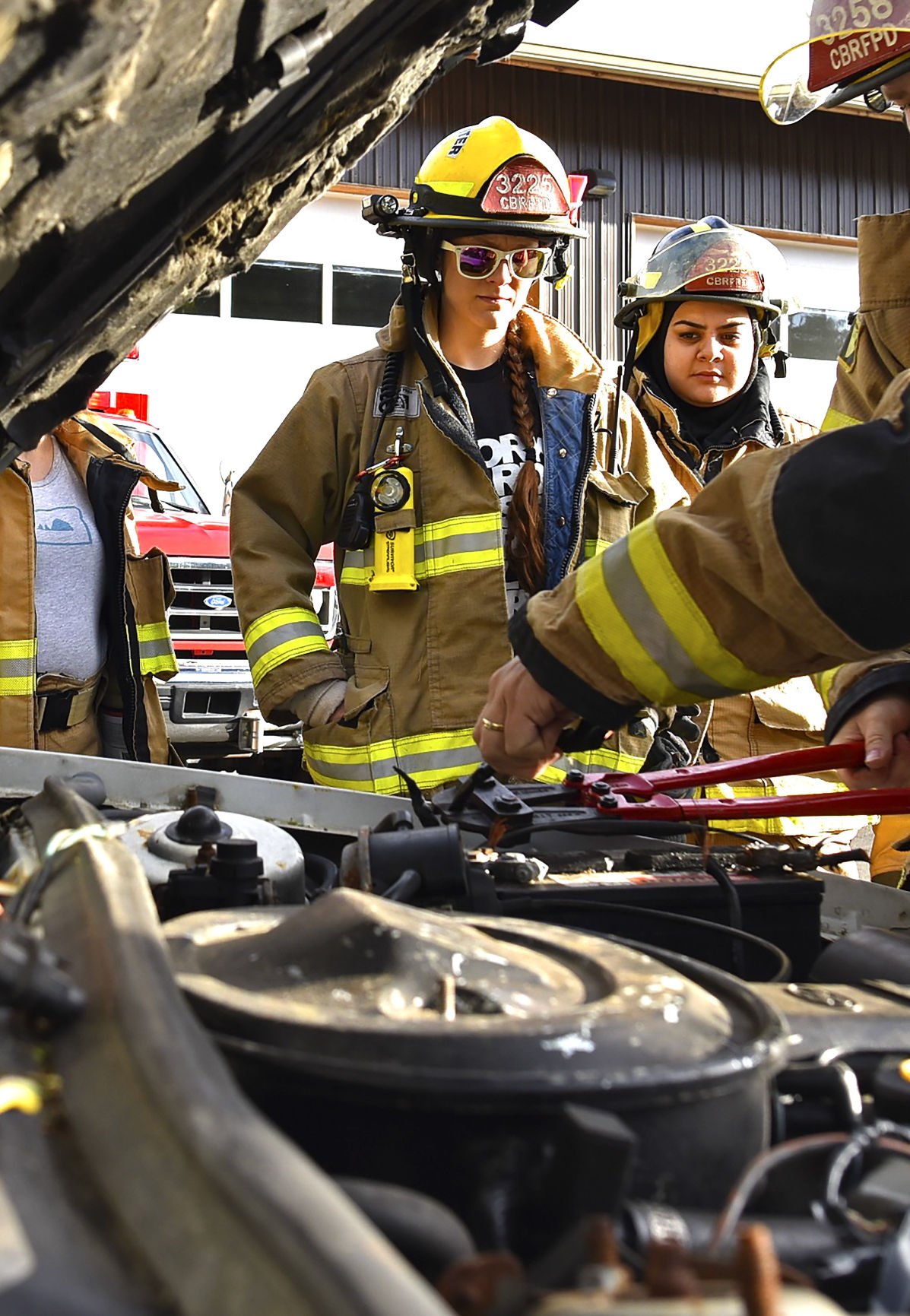 Shaunna White, center, along with her husband, TJ, not pictured, prepares to participate in vehicle-extrication training with the Cannon Beach Fire Department last week.

CANNON BEACH — For some couples, romance is a dozen red roses and a box of chocolates.

“When he’s sitting in the lieutenant’s seat, and I’m driving the truck, I mean, that’s the romance right there,” Shaunna laughed.

The lieutenant next to her is her husband, TJ White, to whom she’s been married for six years. The two both serve as volunteers for Cannon Beach Fire and Rescue, and have done so together for the past three years.

Though now it feels routine, waking up in the middle of the night to respond to a car accident or house fire together wasn’t exactly what the two envisioned as their life together when they started dating 11 years ago. But after both TJ and Shaunna served a tour in the U.S. Marine Corps, firefighting began to play a critical role in easing them back into the community they called home.

In fact, 11 years ago, Shaunna envisioned the exact opposite.

“I actually swore I’d never get into the fire industry,” Shaunna said. Growing up, her mom worked for Medix in emergency medicine in Seaside, and she said she became irritated with her working long hours at strange times of day.

“I hated the sound of that pager going off,” Shaunna said.

But this irritation wasn’t enough to dissuade the crush she developed for TJ when she was 14, who at the time was a volunteer firefighter and her sister’s best friend.

To help move the relationship, her sister suggested she ask TJ to help her fix the radio in the car she just purchased at 16. One thing led to another, and suddenly she found herself loving another first responder.

While it’s not uncommon for couples to be in the same business, some things get more complicated when the business is saving lives.

“It’s one thing when you’re risking your own life,” TJ said. “But it’s different when it involves people you love. Potentially sending my wife into a structure fire is a little bit of a tall order, but it’s a job that has to be done.”

That personal connection is a benefit, too, TJ said. The two have an immense trust and respect for the other’s abilities and judgments. They rarely have to communicate because both know what needs to be done and how.

“When we get done with a call, we both experienced all the same stuff,” TJ said. “Because of privacy issues, we can’t talk about our work with people who weren’t there. But since we both were there, we can help each other process. You see some terrible things sometimes.”

It’s a lifestyle and understanding the two developed while serving in the Marine Corps. Both entered the military in 2009 — TJ after volunteering with Cannon Beach Fire and Rescue for seven years and Shaunna right out of high school.

TJ was inspired by his father, who served as a police officer in Cannon Beach. Serving his country was a way to help replicate the safe, simple childhood he got to experience in Cannon Beach, TJ said.

When the fire department threw a going-away party for TJ at the Driftwood, one of the wives asked him why he was joining the service. “I pointed back at my team, and said, ‘That’s why’ — to make sure people could continue to do whatever they want to do without fear of something else.”

“Wow,” Shaunna said. “That’s a beautiful story. I just didn’t want to go to college. And I wanted to be a Marine.”

“So basically you were more scared of college than going into combat?” TJ asked.

“Yeah, I guess so,” Shaunna laughed.

For Shaunna, it was her grandfather — a veteran of both the Korean and Vietnam wars — that inspired her to enlist. Being a Marine meant being strong, being unstoppable. It meant success.

“So when I finally got in, I remember asking, ‘Can I be a tanker?’ and they said that was for only men. I asked to be a grunt, and again, only men,” Shaunna said. “I could be a cook or a tactical switchboard operator, so I chose the last one.”

The two separated for 11 months for training before TJ managed to transfer near Camp Pendleton in California, where Shaunna was stationed. A year-and-a-half in, they were married, which allowed them to stay together throughout their tours.

“It put a tremendous stress on our relationship,” TJ said. “It’s a lifestyle that’s hard to understand if you’re not in it.”

After living in a world where 4 a.m. runs and six-hour packing trips in the beating sun are status quo, both TJ and Shaunna found something missing in their lives when returning to the civilian world.

“The Marine Corps made me feel unstoppable. It made me who I am today, instead of college. I had this overall important mission. Only 6 percent of Marines are female,” Shaunna said. “So when I got out, I felt like I was nothing, insignificant. It made me depressed.”

That’s when TJ convinced her to try firefighting with him, to help recreate the structure and team atmosphere of the military.

“It doesn’t necessarily make the transition easier, but it will help you give a direction to feel like you are doing something, instead of hanging up your uniform and remembering the good old days. That’s hard.”

One of the largest benefits Fire Chief Matt Benedict sees in veterans who serve as volunteer firefighters is an innate sense of responsibility, work ethic and respect.

“They understand structure, and that is critical. They will fall back on their military background in a major incident,” Benedict said.

For the past year, Benedict has seen veterans, such as Shaunna and TJ, transition and grow more comfortable with the job.

“It’s important to keep their minds busy, and we give them an opportunity to do that,” Benedict said.

Shaunna is pursuing her fire-science degree at Clatsop Community College with the hopes of making firefighting her career. TJ is pursuing a degree is psychology at Oregon State University while working as a phlebotomist at Providence Seaside Hospital in the hopes of becoming a physician’s assistant in emergency medicine.

What type of first responder work and where are to be determined for TJ and Shaunna’s future, but no matter what, they are committed to keeping Cannon Beach safe.

“When I left the military, I missed the challenge,” Shaunna said. “It took me awhile to get here, but I fell in love.”