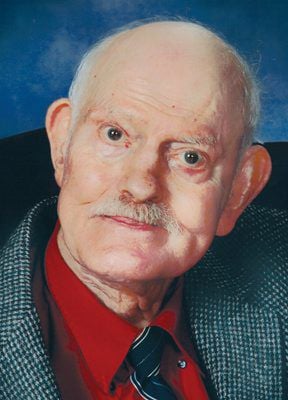 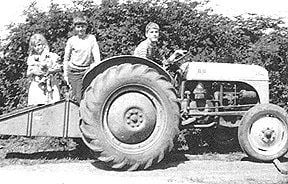 David O’Brien, a longtime resident of Cannon Beach, passed away on April 1, 2015, following an illness that had lasted several months. Many people knew him as the man who zipped around town in his golf cart in the early years, and then in his power wheelchair, always with a smile, and always ready to enjoy a good joke. David attended the Community Church, worked, volunteered at the Cannon Beach Conference Center, and was the founder of Tryad Ministries.

David was born in his parent’s home in Portland, Ore., on Dec. 27, 1933. He attended Grout Elementary School in SE Portland. One of the photographs shows David driving the family tractor when he was about 13 years old, with his younger sister, Ellen Clibbon, and his younger brother, the late Shaun O’Brien.

David trusted in Christ as his savior while he was young, leading to a lifelong desire to help others learn about the saving grace of Jesus Christ.

In 1961, when David was 27, his family moved to British Columbia. While in Canada he gradually became aware that he needed to be on his own. So nine years after moving to Canada, he returned to the U.S., moving in with his brother, Mike, in Portland. David described those days by saying, “Work was scarce, and so I worked a little in a Christmas booth and sold things door-to-door. Looking back I can see how much I needed that time to prepare for the future.”

While in Portland, David became involved with Handicapped Youth For Christ, and regularly attended their leadership meetings. As he became more involved, he also wanted to further his education, both in the Bible and regular schooling. He earned his GED, but still felt he needed to learn more about the Bible. When problems with his adult foster care caseworker caused some difficulties, he felt he needed a break and he arranged to spend some time during the summer at the Cannon Beach Conference Center.

While at the Conference Center, David learned about Ecola Hall, the school now known as Ecola Bible School. He knew that was the Bible education he needed. He spoke with the dean of Ecola Hall, who thought David would have a hard time with the class material, but he finally agreed David could give it a try. The dean recommended that David start with the spring semester, but David couldn’t wait to get started, so he filled out the application for the fall semester.

A short time later he received a letter — Ecola Hall had rejected his application.

Not one to give up, David worked out an arrangement in which he could attend Ecola Hall and live off campus. David called this an important part of God’s plan: “I would later see how important that rejection would be in God’s overall plans for my life. Since I lived off campus, I had the opportunity to become a member of the community of Cannon Beach and didn’t have to leave when school was over.”

David is survived by his sister Ellen (Bob) Clibbon, brother Mike (Greta) O’Brien, Jim Haley (brother-in-law) and various other family members. Our community and his family will always remember David as an individual who loved God, and life, and had the tenacity to always deal with adversity with a smile.

Are you happy to see the cooler weather and the change of season?