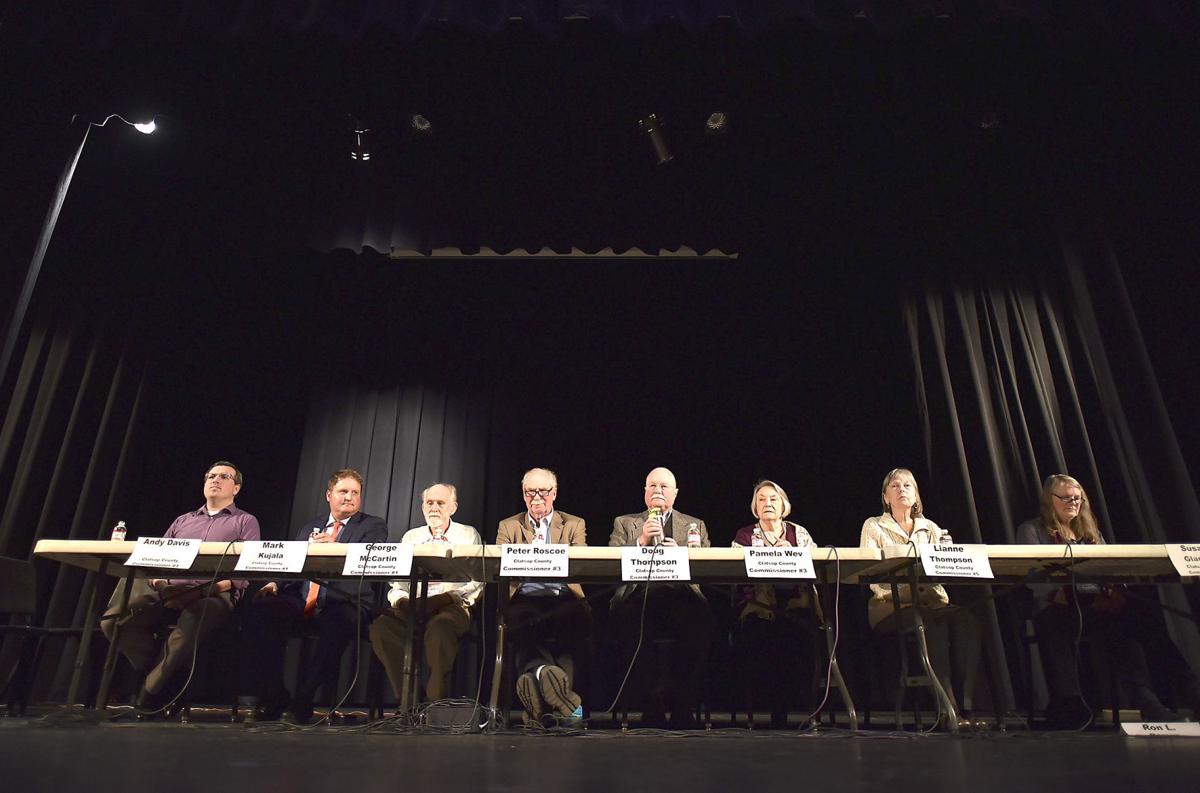 Candidates for Clatsop County commissioner prepare to answer questions during a forum at Astoria High School. 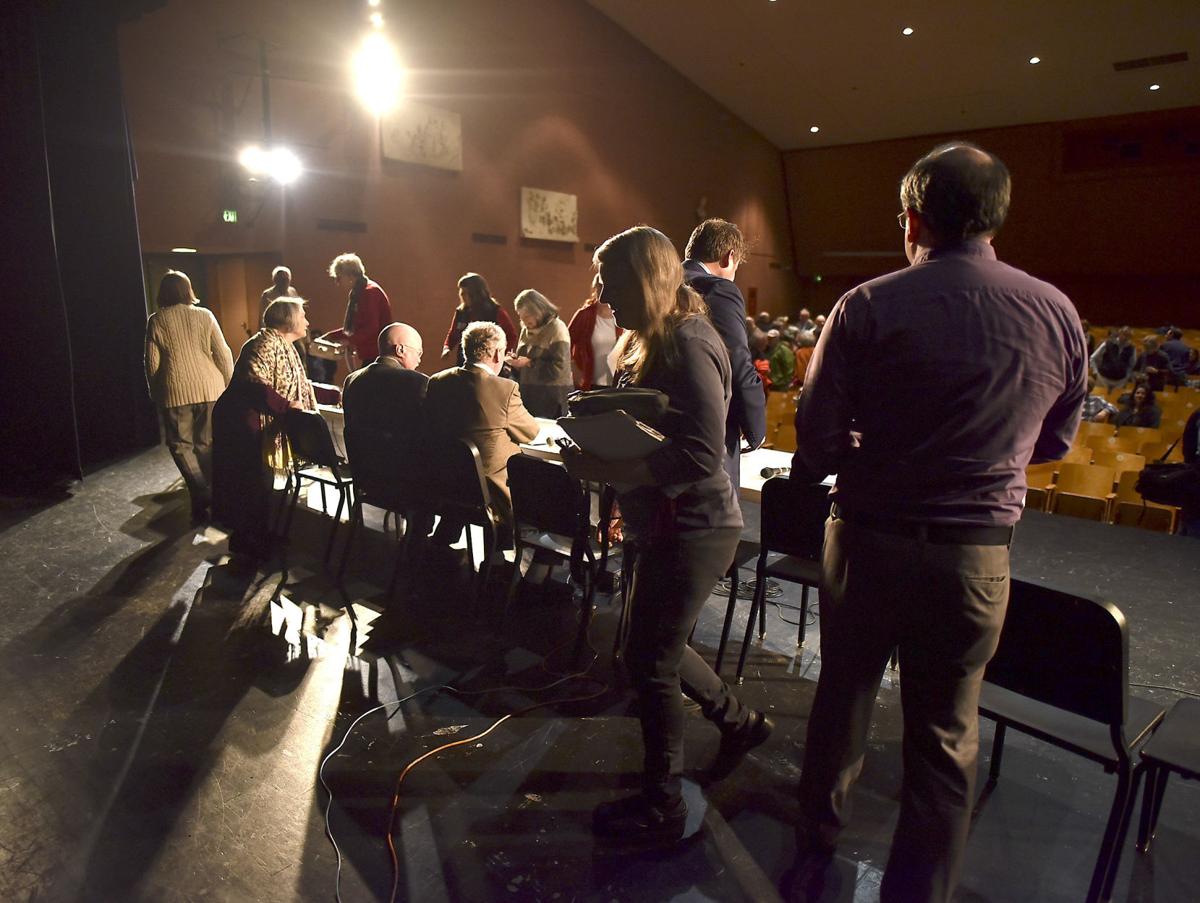 Candidates for Clatsop County commissioner prepare to answer questions during a forum at Astoria High School.

At a forum that covered a range of Clatsop County issues, a few seemed to be a priority for candidates and spectators alike: job creation, emergency preparedness, a November jail bond, housing and the environment.

Eight candidates for three seats on the county Board of Commissioners in the May election gathered Tuesday night for a forum at Astoria High School sponsored by the American Association of University Women and The Daily Astorian.

Roscoe touted his experience and an endorsement from former Astoria Mayor Willis Van Dusen in his case for the position. A large chunk of his experience involves working with natural resources.

“What I would like to see is further utilization of our natural resources, alternative energy. We have a river here that would create a tremendous amount of energy,” he said.

Thompson, who recently stepped down as chairman of the Clatsop County Democratic Central Committee, tagged climate change as the top issue he would address as a commissioner. He added that he opposes any fossil fuel development on the Columbia River.

“That will have the largest impact on us, on our quality of life — locally, of course — than any other factor,” he said.

Wev declined to narrow her priorities, saying that doing so is not “good government.” She opted instead to explain her government experience in other areas and as a land use consultant.

She brought up the likelihood that a jail bond will have to compete with two school bond measures on the November ballot — one in Astoria and another in Warrenton — as an example of how local governments can better coordinate.

In District 1, Mark Kujala — owner of Skipanon Brand Seafood and a former Warrenton mayor — George McCartin — a retired attorney and regular presence at public meetings — and Andy Davis — a medical data analyst — are vying for the seat being vacated by Scott Lee, the board’s chairman. While each candidate listed some specific points of interest, they all agreed on one area in need of change: the commission’s functionality.

McCartin pointed to infighting on the commission as the No. 1 area he would want to address.

“My priority would be to get the commission itself, through solidarity and dialogue, get them together to stop any antagonism,” he said.

Kujala stressed job creation throughout the forum, mentioning his support for policies such as allowing enterprise zones as incentives for development.

“I would think that jobs and affordable housing are probably the most pressing issues for the county,” he said. “But I also agree with George and think stability is important to having a board or commission.”

Davis touted his professional experience as an indicator of his ability to parse through complex decisions. He has mentioned education as a priority since he announced his candidacy, specifically his opposition to a county study examining the feasibility of privately funded preschool. Along with the two other candidates, though, he pressed the need for the commission to work better together.

Commissioner Lianne Thompson is facing challenger Susana Gladwin — a Jewell farmer — in the race for the District 5 seat. Both discussed housing, economic development and emergency preparedness — three topics Thompson has often highlighted at commission meetings, as well. The most specific proposals from each candidate came in a discussion about preparedness for a Cascadia Subduction Zone earthquake and tsunami.

Thompson said it is critical to train residents in disaster preparation, build up supplies and establish relationships with other at-risk counties. She mentioned her attendance at statewide conferences, which has drawn criticism from other commissioners due to her travel expenses, as useful in this context.

“We have friends all over the state to help us,” Thompson said.

Gladwin said she was isolated for four days on her Jewell farm in 1996 due to flooding on the Nehalem River. She said Seaside needs bicycle evacuation drills, bridges and more truck routes out of cities.

“We plan constantly about how as a community we will survive because we know we’ll be isolated after a bad earthquake and the bridges are down,” she said.

Both Thompson and Gladwin largely avoided addressing a question about the upcoming bond measure that would relocate and expand the county jail at a cost of more than $20 million. Most of the other candidates supported the need for a new jail with the exception of McCartin, who questioned whether such an expense is justified.