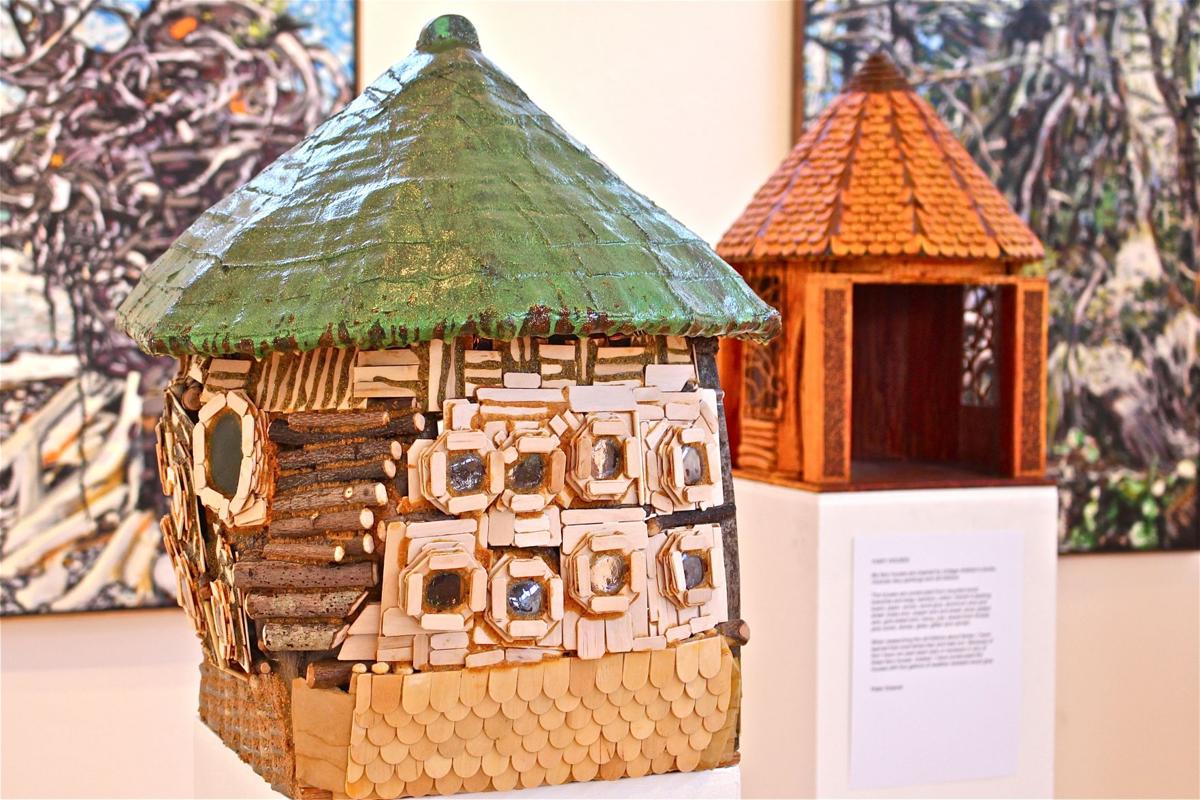 Peter Greaver's “Daydream House,” in the foreground, and “Amber House” are two of the nine fairy houses on display at the Cannon Beach Gallery. Both are priced at $1,200. 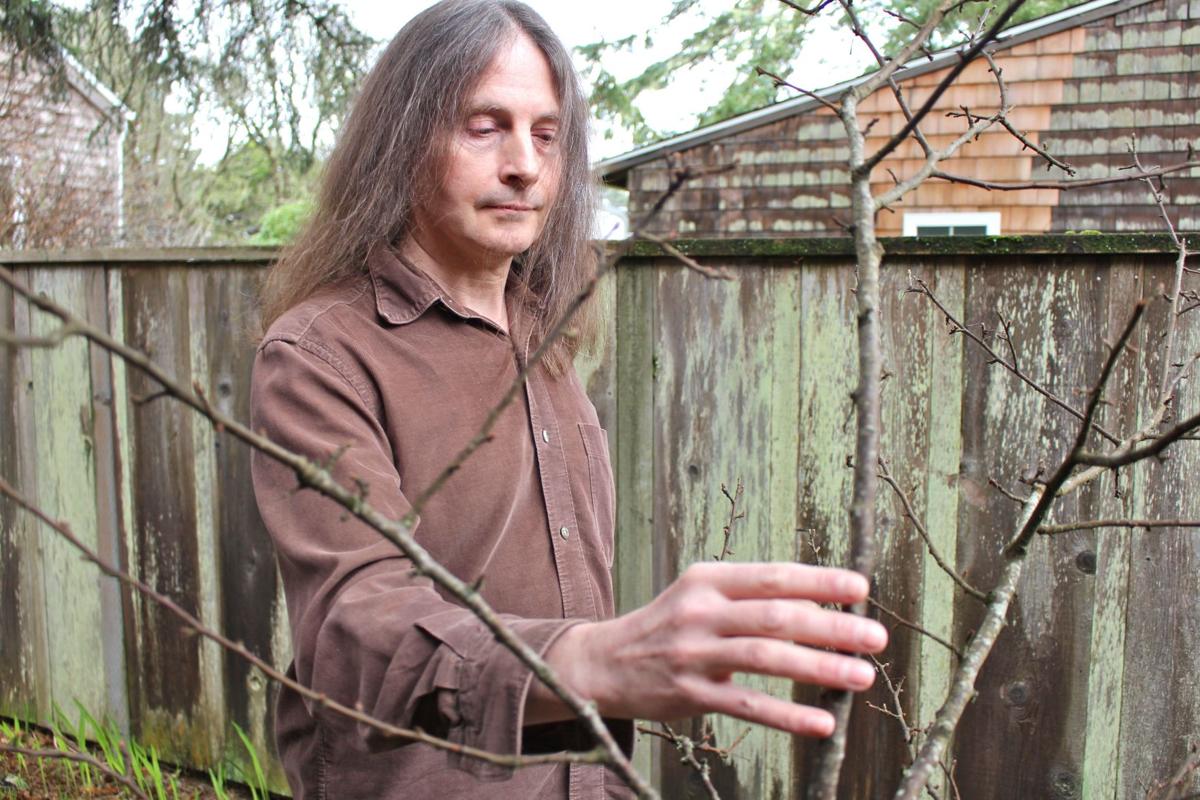 Peter Greaver strokes a crabapple tree he is nursing back to life in the Greaver Gallery garden. He is the 2013-14 recipient of Cannon Beach's Individual Artist Grant. 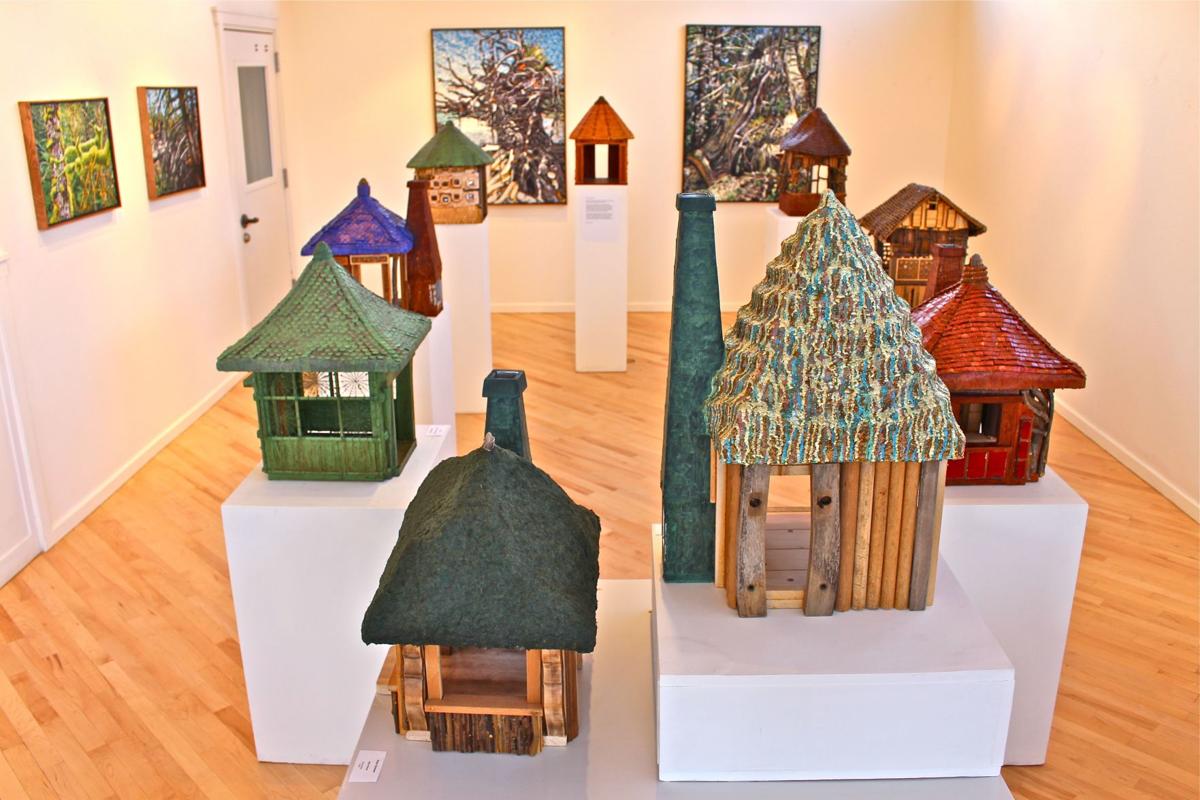 Peter Greaver, recipient of Cannon Beach's 2013-14 Individual Artist Grant, fashioned nine fairy cottages for his grant project. He is having a joint exhibition with painter Carl Annala at the Cannon Beach Gallery through Jan. 25. 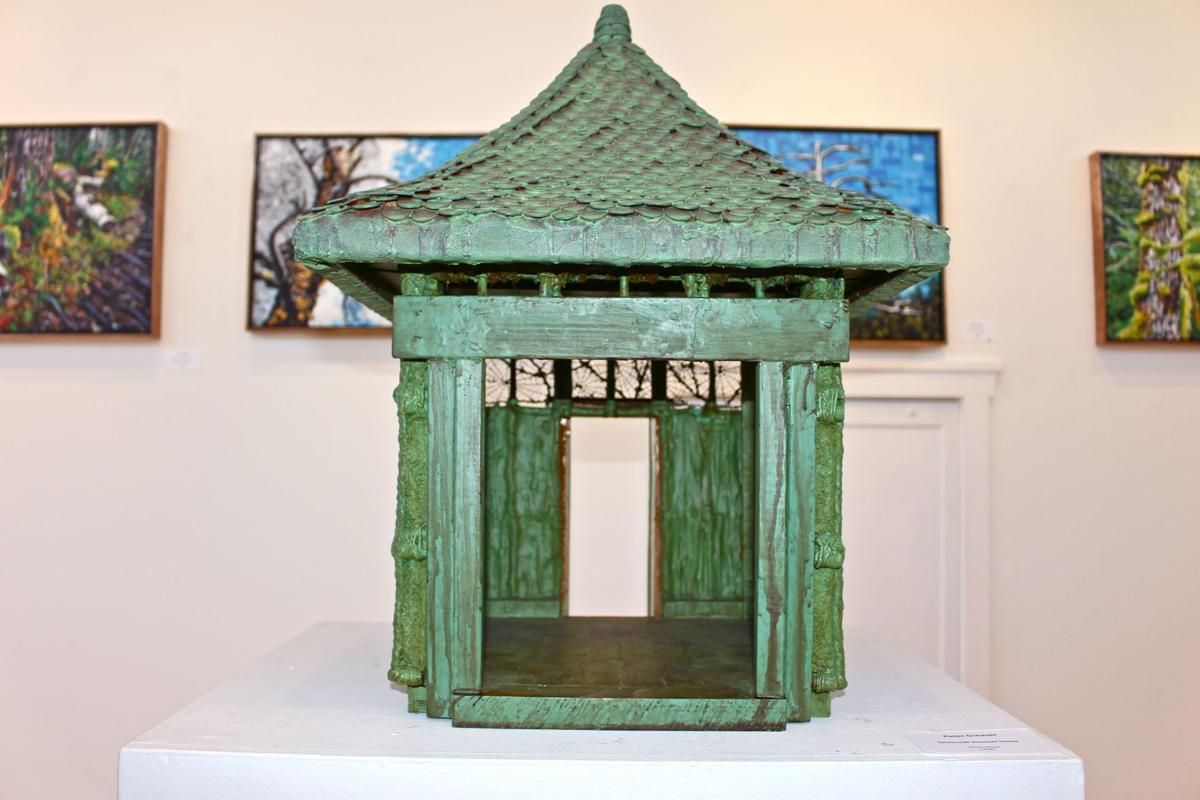 “Spiderweb Summer House,” a mixed-media fairy house created by Peter Greaver, is selling for $2,000 at the Cannon Beach Gallery. On the gallery's walls are paintings by Carl Annala.

Peter Greaver's “Daydream House,” in the foreground, and “Amber House” are two of the nine fairy houses on display at the Cannon Beach Gallery. Both are priced at $1,200.

Peter Greaver strokes a crabapple tree he is nursing back to life in the Greaver Gallery garden. He is the 2013-14 recipient of Cannon Beach's Individual Artist Grant.

Peter Greaver, recipient of Cannon Beach's 2013-14 Individual Artist Grant, fashioned nine fairy cottages for his grant project. He is having a joint exhibition with painter Carl Annala at the Cannon Beach Gallery through Jan. 25.

“Spiderweb Summer House,” a mixed-media fairy house created by Peter Greaver, is selling for $2,000 at the Cannon Beach Gallery. On the gallery's walls are paintings by Carl Annala.

Peter Greaver, the 2013-14 recipient of Cannon Beach’s Individual Artist Grant, doesn’t know if he believes in fairies, but he certainly believes in what they represent: the magic and majesty of the natural world.

For all the fantasy found in fairy lore — traditional and contemporary — there is an often overlooked spiritual element that more people should tap into, he said.

Our culture is losing its “mystical, romantic relationship with nature,”Greaver added. “It’s being replaced with technology.”

With his current exhibition (funded by the $3,000 grant) at the Cannon Beach Gallery, Greaver seeks to elicit the same sense of enchantment he experienced while reading large, elaborately illustrated children’s books that depict fairies and the worlds they inhabit.

The untitled show, which opened Dec. 20, and runs through Jan. 25, is a joint exhibition that includes the work of Carl Annala, a Portland-based painter. The gallery will host an artist reception 5 to 7 p.m. Jan. 3.

Greaver’s half of the show consists of nine dramatically diverse miniature houses that could serve as plausible dwellings for adult fairies roughly 7 inches tall.

Greaver wanted the structures to seem “realistic and functional.” Most of the houses are shingled, some with pine cone scales. Several houses are square-shaped, others are round. Some even have chimneys.

For the past year, he worked on all of them simultaneously. “Realistically, I could continue to work on them for another year because I see all these ways in which they could be enhanced,” he said.

“Greaver’s work surpasses all expectation,” said Andrea Mace, executive director of the gallery. “It is truly the definition of exquisite — finely detailed and executed with a highly developed sense of craftsmanship.”

As a child, a trip to the library was an adventure, said Greaver, who was raised in Maine and Michigan.

For him and his two younger siblings, picture books — like Jane Werner’s The Giant Golden Book of Elves and Fairies (1951), illustrated by Garth Williams (who also illustrated “Stuart Little” and “Charlotte’s Web”) — “had a lot of importance in our little lives,” he said.

Greaver’s favorite stories were about fairies, and before long he started drawing them. Back then, his work was “quite primitive, as you might expect,” he said. But, as he matured, his art shifted away from fairies, “which is a normal part of growing up,” he said.

A 2004 visit to Faerieworlds, the annual festival held in Oregon that celebrates all things fairy, drew him back into the fairy realm, which he had begun to miss, he said.

Until then, he had visualized fairies in only a two-dimensional space. “It wasn’t real physical depth because paintings are flat. It was more like psychological or emotional depth.”

Suddenly, though, he was surrounded by people, including some cosplayers (“costume players”), who took their enthusiasm for fairies to a different level through their arts-and-crafts work. That was the genesis of his ideas for three-dimensional fairy art, he said.

YouTube users can watch fairies that range from glistening Japanese anime creations to “computer generated Barbie Dolls with wings, from giant entertainment corporations that talk like girls at the mall,” he said. “A lot of it is very far removed from the original source material.”

Greaver identifies two basic kinds of fairies: the pretty, romantic “girlie girl” fairies with gossamer wings, and the wingless creatures of ancient folklore that tend to be dangerous and unpredictable. He has studied both kinds and blends the two in his artwork, he said.

Greaver, a part-time Cannon Beach resident who spends most of his time living in Portland, has been “drawing and painting since I could hold a crayon or a paintbrush,” he said. “But, I think, growing up in a family of artists, I stayed with it more than the average kid.”

His parents, Hanne and Harry Greaver, own the Greaver Gallery on South Hemlock Street, where Peter Greaver sells his artwork.

Though “Fairy Houses” is an all-sculpture show, Peter Greaver defines himself primarily as a painter. He produces a great deal of traditional pieces for the general market — landscapes, flowers, cats, abstract decorative art, etc. — and does custom portraits of people and pets.

From his late teen to early 20s, Peter Greaver attended the Kalamazoo Institute of Arts in Kalamazoo, Mich., then Pratt Institute in Brooklyn. He earned his bachelor of fine arts degree in Chinese landscape painting at the Museum Art School (now the Northwest College of Art) in Portland. His work is featured in the Portland Art Museum’s Rental Sales Gallery.

Greaver, who also makes jewelry, grew up playing electric guitar, his rock music ranging from “very soft to very hard,” he said, adding that he’s barely picked up his guitar in the last year since “the fairy houses kind of took over my life.”

The sculptures don’t just express his personal interest in fairies but a desire to share the sense of wonder he has always felt for the earth and the magic that may reside in it. If fewer people took nature for granted, “I think that would be a good thing,” he said.