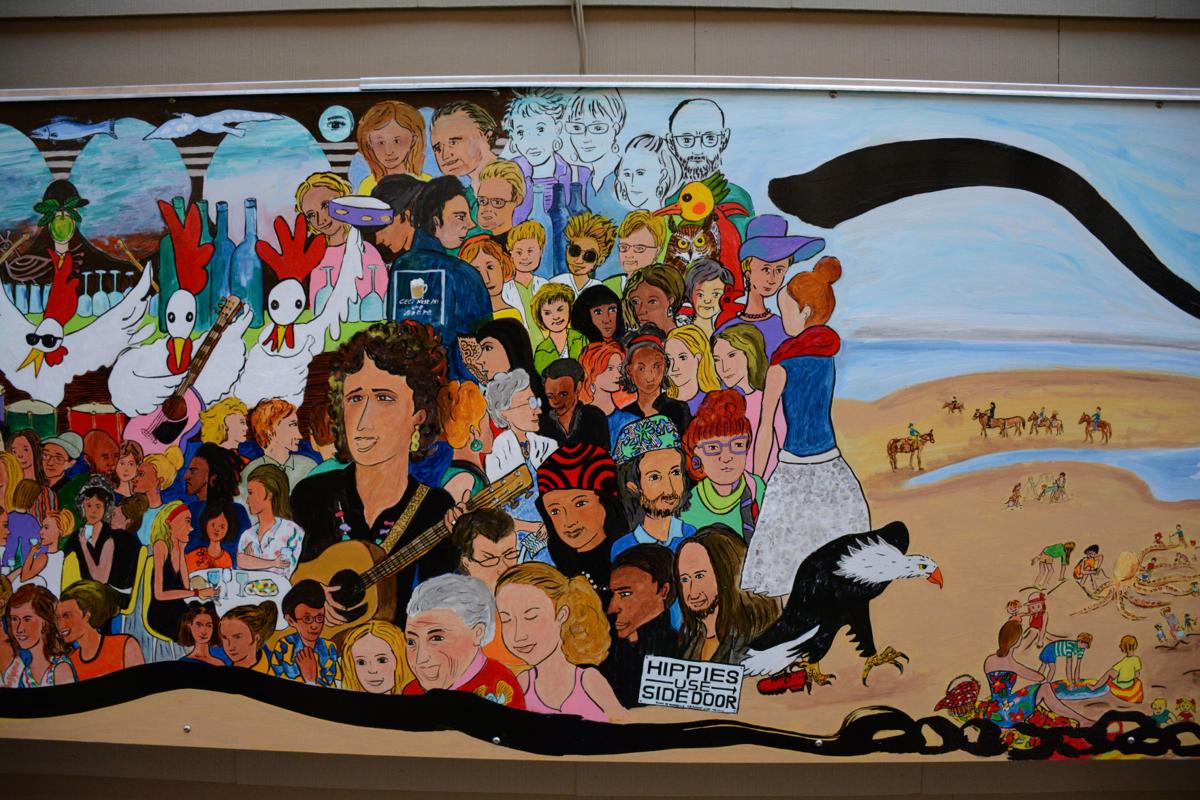 “At Play in Cannon Beach” is a 54-foot-long painting located in an archway adjacent to White Bird Gallery. 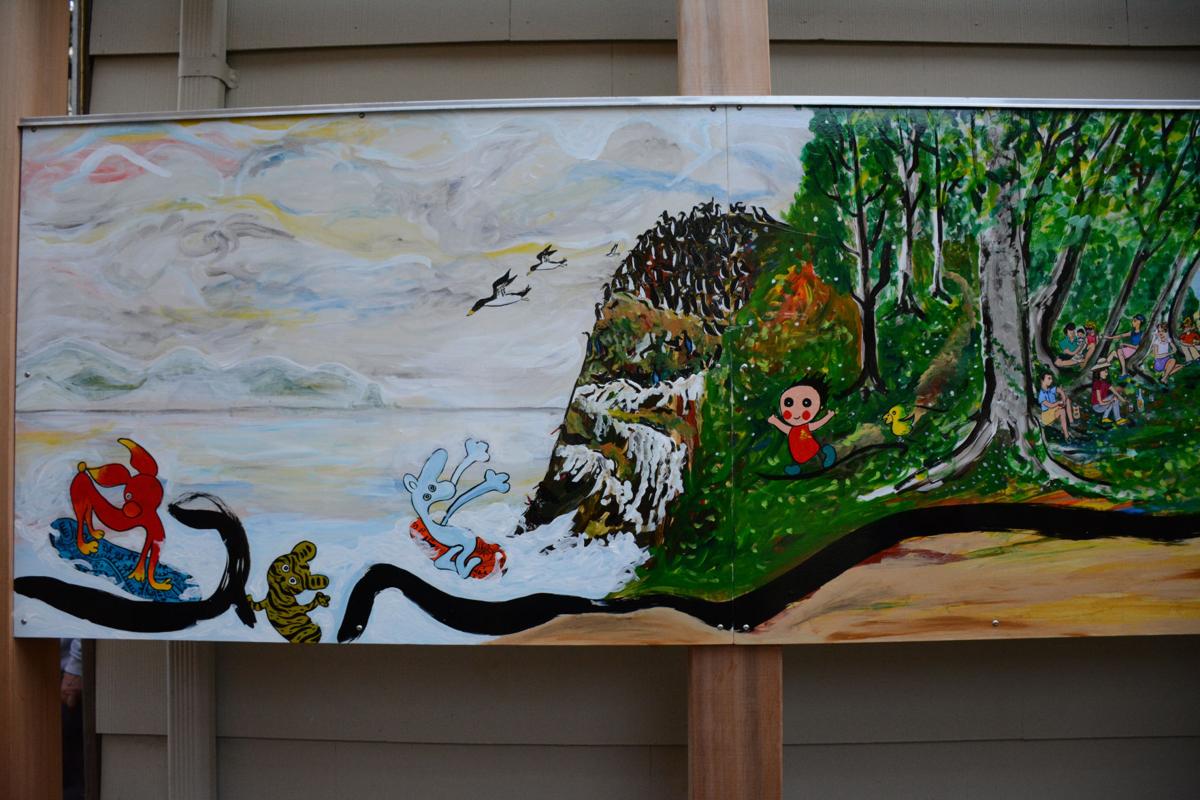 One of several panels depicts a beach scene. 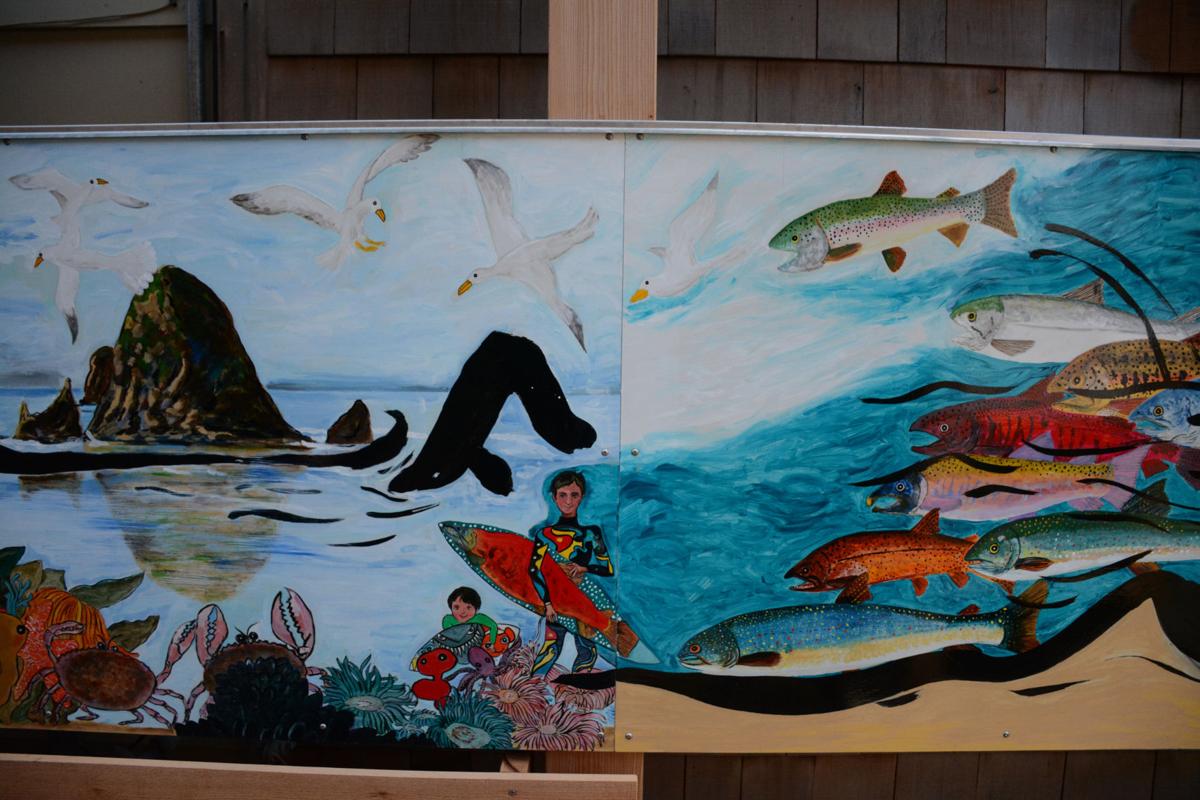 Haystack Rock is one of the inspirations. 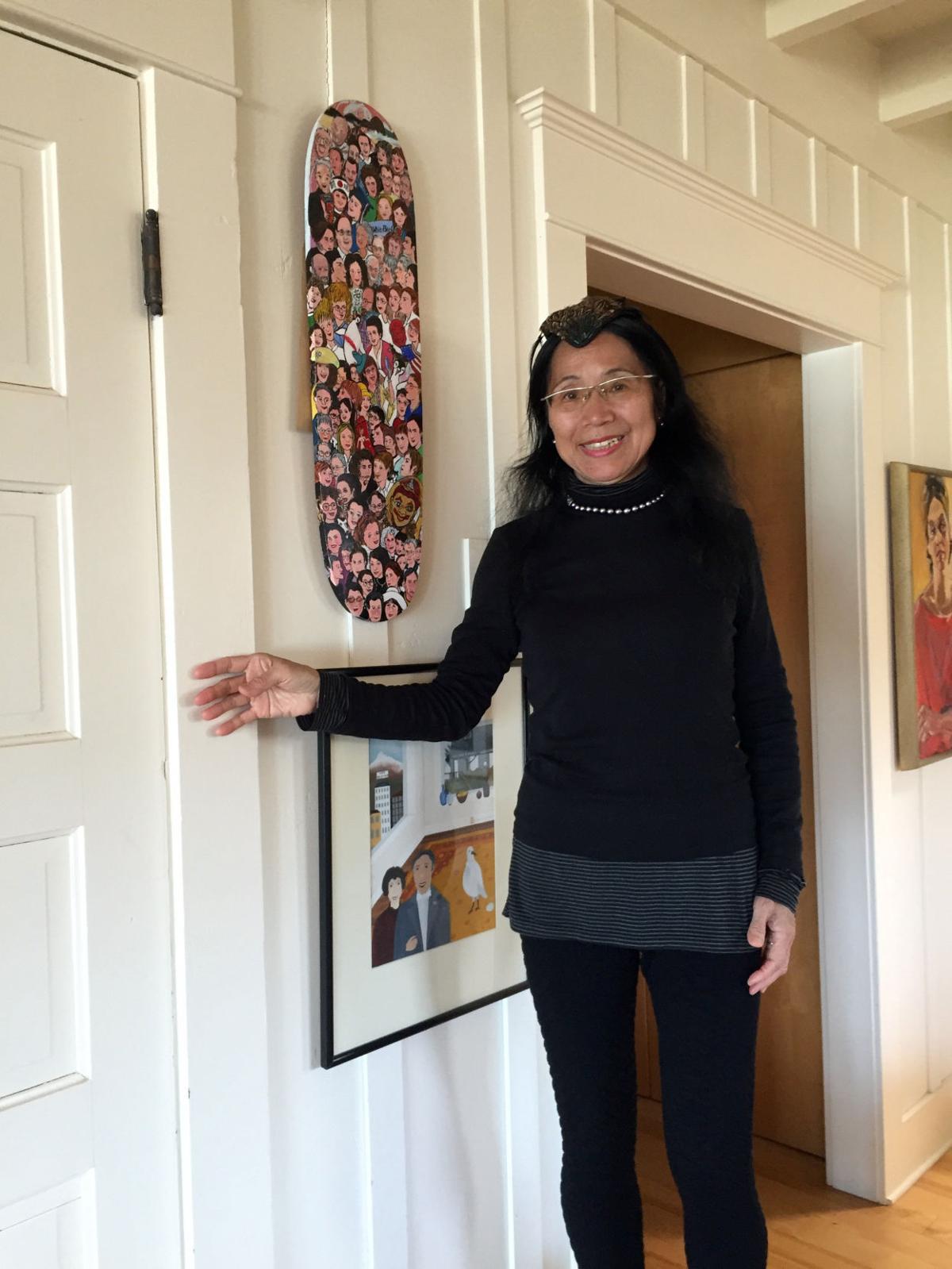 Artist Rumi Tsuda, who painted “At Play in Cannon Beach,” at her family's Cannon Beach home with another piece of art she created.

“At Play in Cannon Beach” is a 54-foot-long painting located in an archway adjacent to White Bird Gallery.

One of several panels depicts a beach scene.

Haystack Rock is one of the inspirations.

Artist Rumi Tsuda, who painted “At Play in Cannon Beach,” at her family's Cannon Beach home with another piece of art she created.

The painting by Rumi Tsuda, “At Play in Cannon Beach,” was permanently installed in April in a new cedar pergola adjacent to White Bird Gallery.

The artwork, which serves as an entrance to Garret Sea Building businesses, depicts a world both whimsical and recognizable.

There are glimpses of everyday life, such as people playing and surfing on the beach, birds on Haystack Rock, live music enjoyed at a bar, bonfires, galleries and shops like Bruce’s Candy Kitchen.

Meanwhile, chickens play in a band, a catfish smokes and a Dr. Seuss-like creature makes an appearance at the Fourth of July parade.

“Some of it is my imagination,” she said.

Tsuda, a professional artist since the 1980s, also studied nature, learned about different types of fish and “watched the waves and the color of the ocean.”

She added Native American elements to the painting, including the canoe at the Cannon Beach Elementary school site.

Every day for two months, Tsuda walked on the beach to her small studio downtown in the bike shop. She worked for nine to 10 hours a day, with food and wine breaks. Before painting, she made sketches using a calligraphy technique.

Many faces in the painting are people Tsuda observed and sketched in Portland and Cannon Beach, at places like Bill’s Tavern. She also painted her 14-year-old son Maurice holding a fish.

Tsuda lives with her artist husband Daniel Georges, whose family owns White Bird Gallery, in Brooklyn, New York. She works in her Williamsburg studio and enjoys sketching the variety of faces she sees.

Tsuda was born in Wakayama, a small coastal city in Japan. She moved to California in the 1970s to study fashion design, then went on to earn her bachelor’s and master’s in fine arts from the School of Visual Arts in New York City. She visits Japan and Cannon Beach several times a year.

Tsuda works in a variety of mediums, including ceramics, sculpture and fashion design.

For a 2007 art project, she painted Barbie dolls white and put Japanese clothing on them, combining her American and Japanese identities.

Tsuda and Georges organized 250 participants from around the world for a 2008 passport art project, “Your Document Please,” that went to Hungary, Germany, Slovakia, Mexico and Japan.

During college, Tsuda started using public performances as an outlet for frustrations with working at a Japanese restaurant and overcoming the language barrier she experienced.

“I could express myself,” she said. “Lots of my performances focus on women.”

Her hourlong performances would involve wearing colors that represented emotions, yelling and breaking items like mirrors. “I’m like a resting volcano,” she joked.

She has also created a dress using New York Times newspapers for a recycled fashion show.