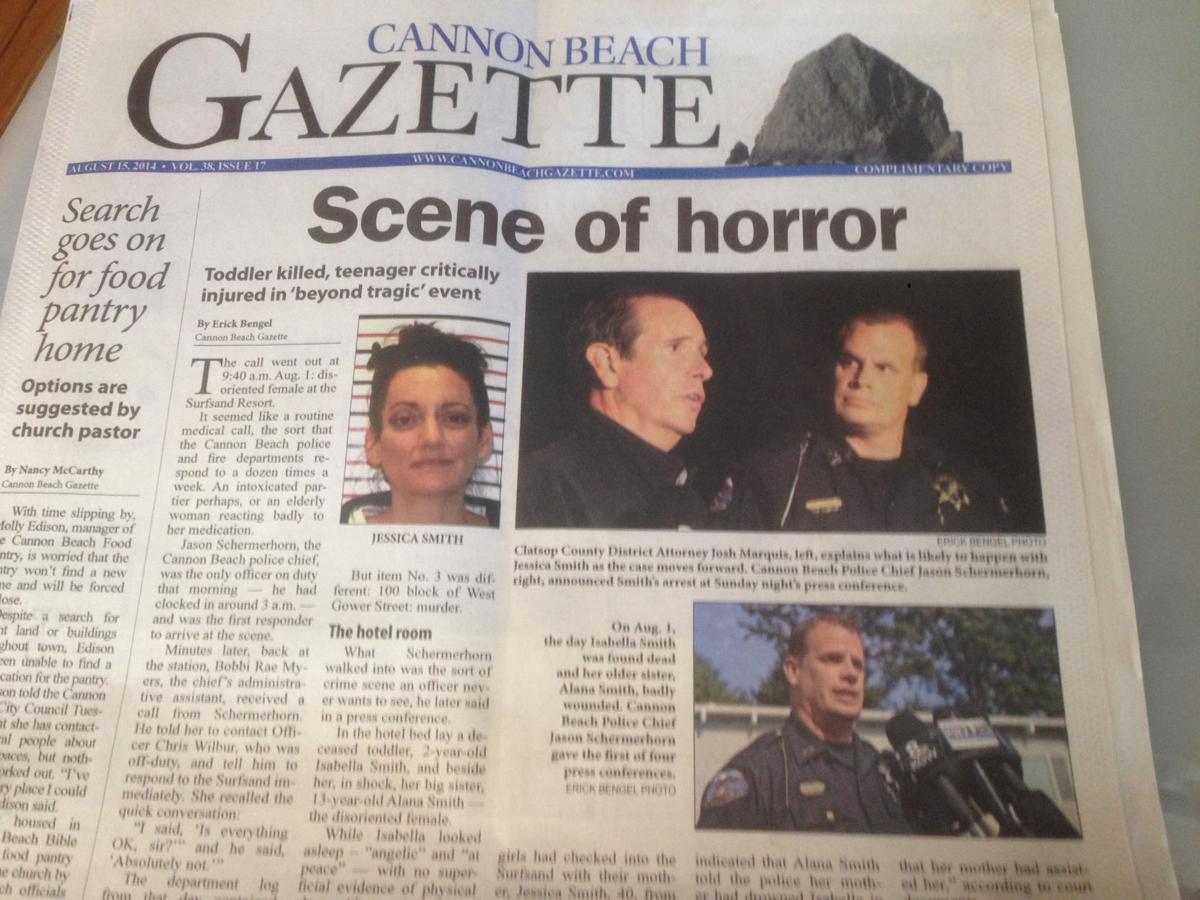 Headlines in the Cannon Beach Gazette one year ago. The case has left a lingering impact on both law enforcement and the community. 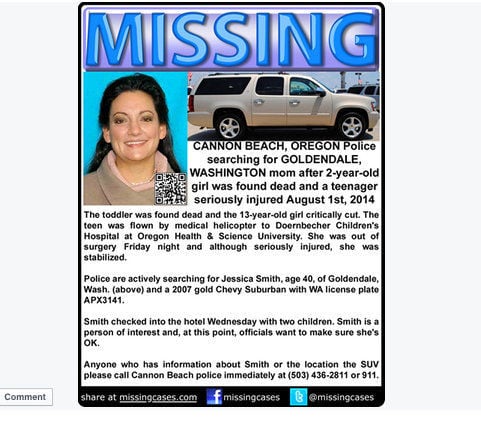 "Missing" alert issued by Cannon Beach police after a tragic killing one year ago.

Headlines in the Cannon Beach Gazette one year ago. The case has left a lingering impact on both law enforcement and the community.

"Missing" alert issued by Cannon Beach police after a tragic killing one year ago.

One year ago, on Friday morning, Aug. 1, Cannon Beach police received a call seeking assistance for a “disoriented female” at the Surfsand Resort.

Police Chief Jason Schermerhorn, who had been on the Cannon Beach force for only 18 months after a 26-year career in Seaside, was not prepared for what he was to find. When he and Cannon Beach Fire Captain Matt Gardner broke their way into the hotel room, they found a dead toddler, 2-year-old Isabella Smith, and beside her, in shock, her older sister Alana Smith, 13. Alana was lying in her own blood, severe cuts on her body, blood spread throughout the room.

Their mother, Jessica Smith, 40, from Goldendale, Wash., was implicated in the attack and apprehended after a two-and-a-half-day search. She was arrested and taken into custody by the Cannon Beach Police Department and the Clatsop County Major Crime Team. She is currently in Clatsop County Jail awaiting trial in summer 2016.

It was an incident no cop ever wants to experience, but few are spared.

Schermerhorn took time out Tuesday to share his thoughts at the approach of the one-year anniversary.

The early morning of Aug. 1, 2014, Schermerhorn was filling in at the overnight desk for an officer on vacation. He’d been covering since 3 a.m. when at 9:40 the emergency call came in from a housekeeper at the Surfsand Resort, who was unable to gain entry to the room.

Schermerhorn arrived at the scene with Matt Gardner.

“We didn’t know what we were going into,” Schermerhorn said. “We ended up cutting the dead bolt to get in.”

The “disoriented female” who had been reported, Schermerhorn realized, was 13-year-old Alana Smith. Medix responded and she received treatment at Seaside hospital. Meanwhile, Jessica Smith was at large.

Cannon Beach City Council chambers on Gower Avenue were turned into a war room, with local, state and federal agencies coordinating the search.

“The FBI came down and introduced themselves and said, ‘We’re here to help you. If you want us here, we’ll accept that, and if you want us to leave, we’ll respect that.’ There was no issue, they were great.

“Each day I would come in at 6 a.m. and work until midnight, popping back and forth to see where they were and see what they needed,” Schermerhorn said.

The third day, Jessica Smith’s car was found on the logging road off Highway 26.

“Interesting thing — Alana had said she thought her mom would go to a park or logging road,” Schermerhorn recalled.

Jessica Smith was apprehended without incident, taken for medical evaluation and transported to the county jail.

After her arrest, Schermerhorn remained at police headquarters in Cannon Beach.

Meanwhile, the press from Portland and beyond descended on Cannon Beach.

Schermerhorn found himself before the microphones.

“You really can’t say ‘no comment,’” he said. “Having a prepared statement is important, but having knowledge of what’s going on is important as well.”

Schermerhorn said despite efforts to keep his two children away from the news, the steady stream of headlines made that impossible.

“My son saw his dad on the front cover of the newspaper and asked what was going on,” Schermerhorn recalled. “He was 10 at the time. That’s just a hard thing to explain. Why would a little girl’s mom hurt her? It’s very hard to explain to anyone, much less your own child.”

Community support made a big difference during the healing process.

“Cannon Beach is a great town,” he said. “There was a lot of support afterward, people who brought thank-you cards. People who said they were thinking of us. That’s important. Law enforcement is such a thankless job most of the time. When you do get thank-yous and kudos for doing your job, it’s appreciated.”

For Schermerhorn, the process is far from over. A year later the attacks are something he “constantly thinks about.”

In trying to understand the motives for the killing, Schermerhorn said he believes this was Jessica Smith’s “last hurrah” before she was supposed to give her children over to her divorced husband.

“We adults become controlling during a divorce,” he said. “There’s got to be a better way of handling it. There needs to be better counseling, and family check-ups.”

“The great thing about it — if there was any good about it — was the community partnerships we developed,” Schermerhorn said. “Every one of the agencies we worked with stepped up.”

Can future tragedies like this be prevented in Cannon Beach?

“You can do your best to do prevention and be visible, but there are things you can’t stop from happening because you can’t see them coming,” he said. “That’s something you see with a tourist population, transient population, people coming back and forth on weekends. You do deal with a certain criminal element. It may be somebody who’s never committed a crime before in their life. For some reason they make a poor decision, or a poor choice.”

One year later, young Isabella remains a haunting figure in his mind. “I know Isabella’s birthday was a couple of weeks ago,” he said. “That’s just sad. Her family will never get over it. Alana can get counseling, and all the love you can give her, but it will still be in the back of her mind, having lived through that.

“The hard part is we’ll be going through the whole thing a year from now when it goes to trial,” he said. “It’s difficult for me to understand how they can make Alana go through it then. Why not get it done as soon as possible? That is the most horrific thing for me to see, because she just needs to get past it.”

Schermerhorn admits he, too, may never fully get “past it.”

“It’s something that never leaves our minds,” he said. “I still have a picture of Alana in the hospital, when she was released, in my office. That picture reminds me of why I’m doing law enforcement. The reason we go into this thing is to help people. The medics and crew who were on scene that day saved her life. That’s something that explains why we do the things we do.

“We didn’t have anybody say, ‘How could this happen in our town?’ You wonder that, but everybody knows as small as we are, everything can still happen here.

“It’s something you’ll never get used to,” he said. “When you do get used to it, it’s time to get out of law enforcement, because you’ve just kind of lost your heart.”