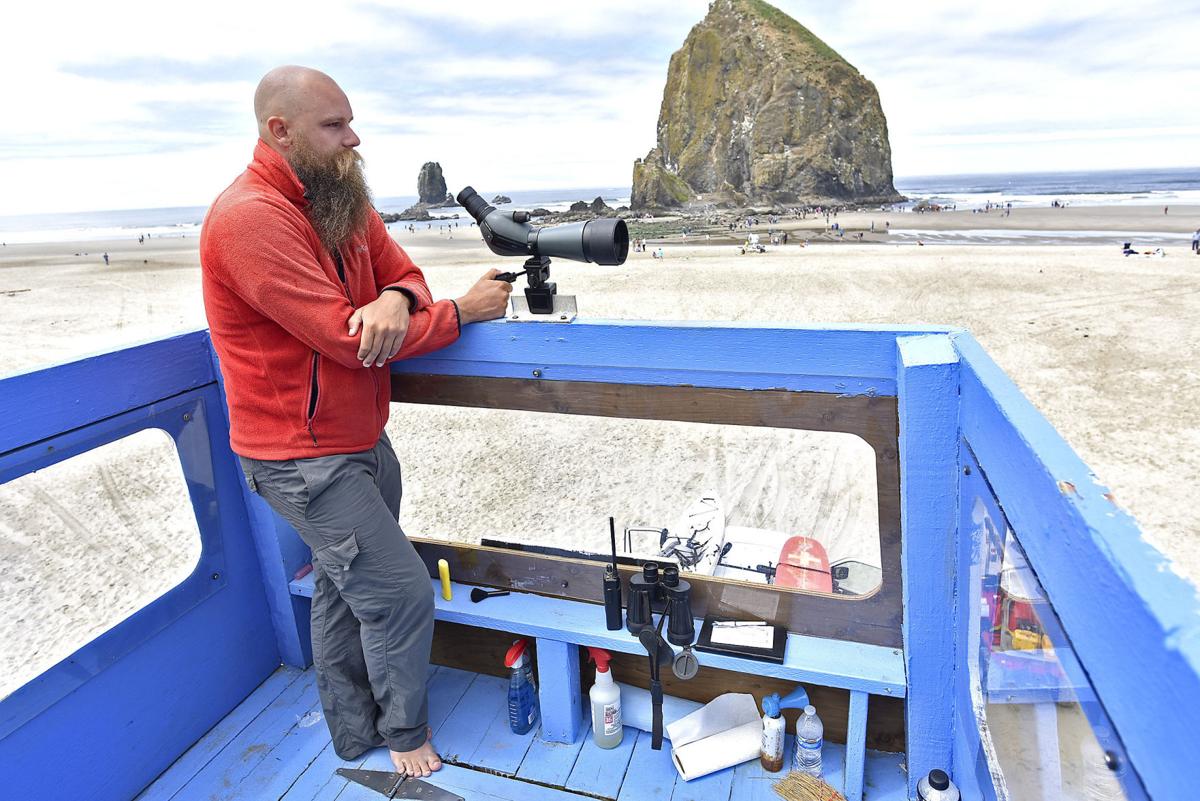 Cannon Beach lifeguard Jesse Willyard keeps a close eye on the surf and the sand from his perch atop a lifeguard stand last week near Haystack Rock. 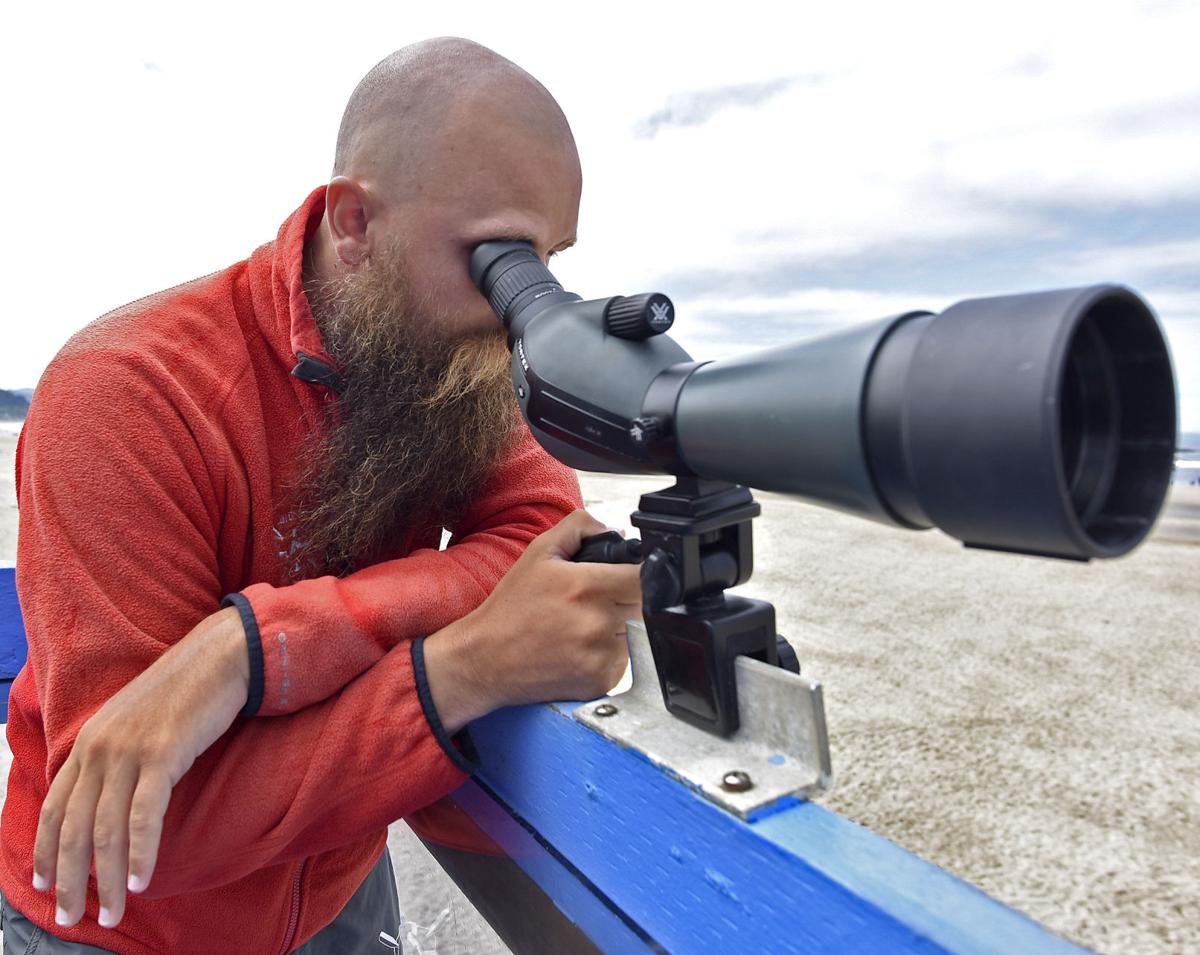 Jesse Willyard monitors the waters and the beaches near Haystack Rock in Cannon Beach last week. Willyard and other lifeguards are well-equipped to handle the massive numbers of tourists that visit the area in summer months. 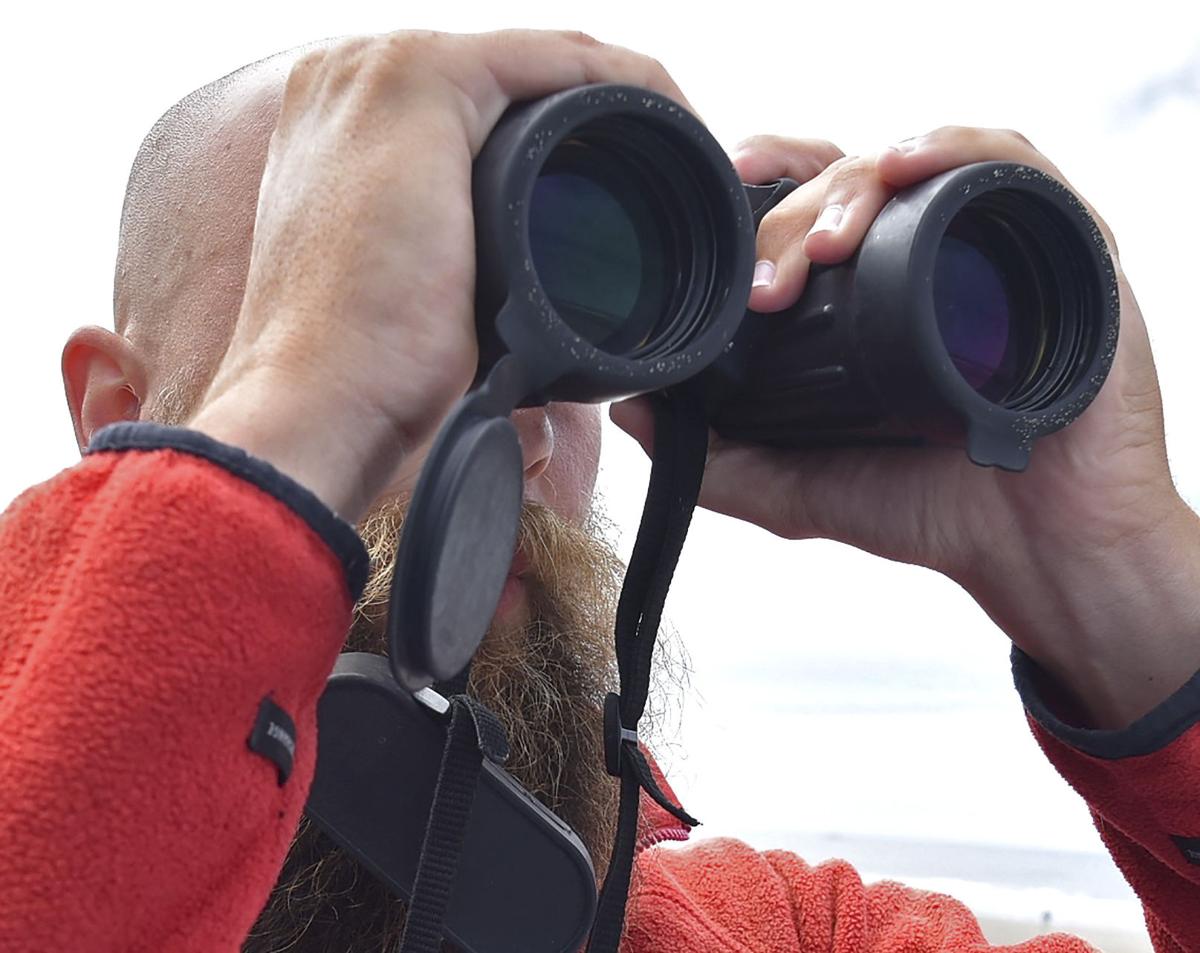 Cannon Beach lifeguard Jesse Willyard uses binoculars and a scope to keep a watchful eye on the waters and the beaches of the area. 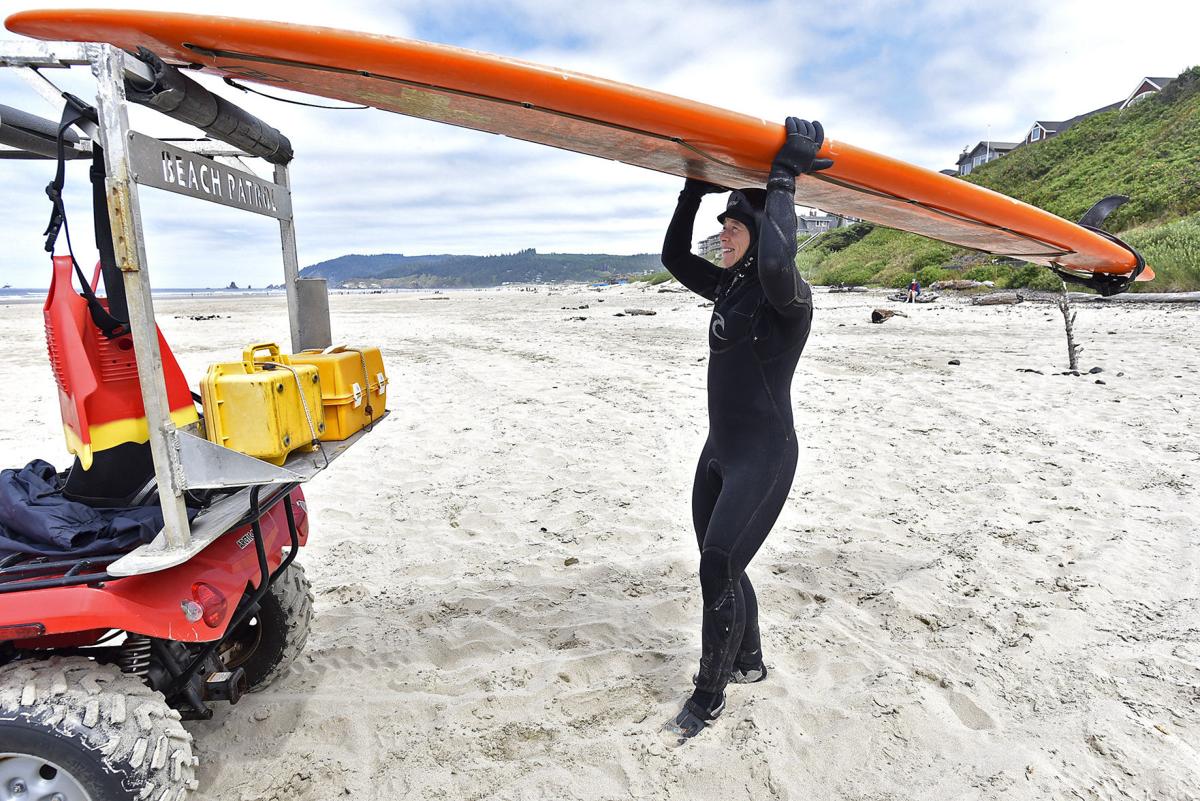 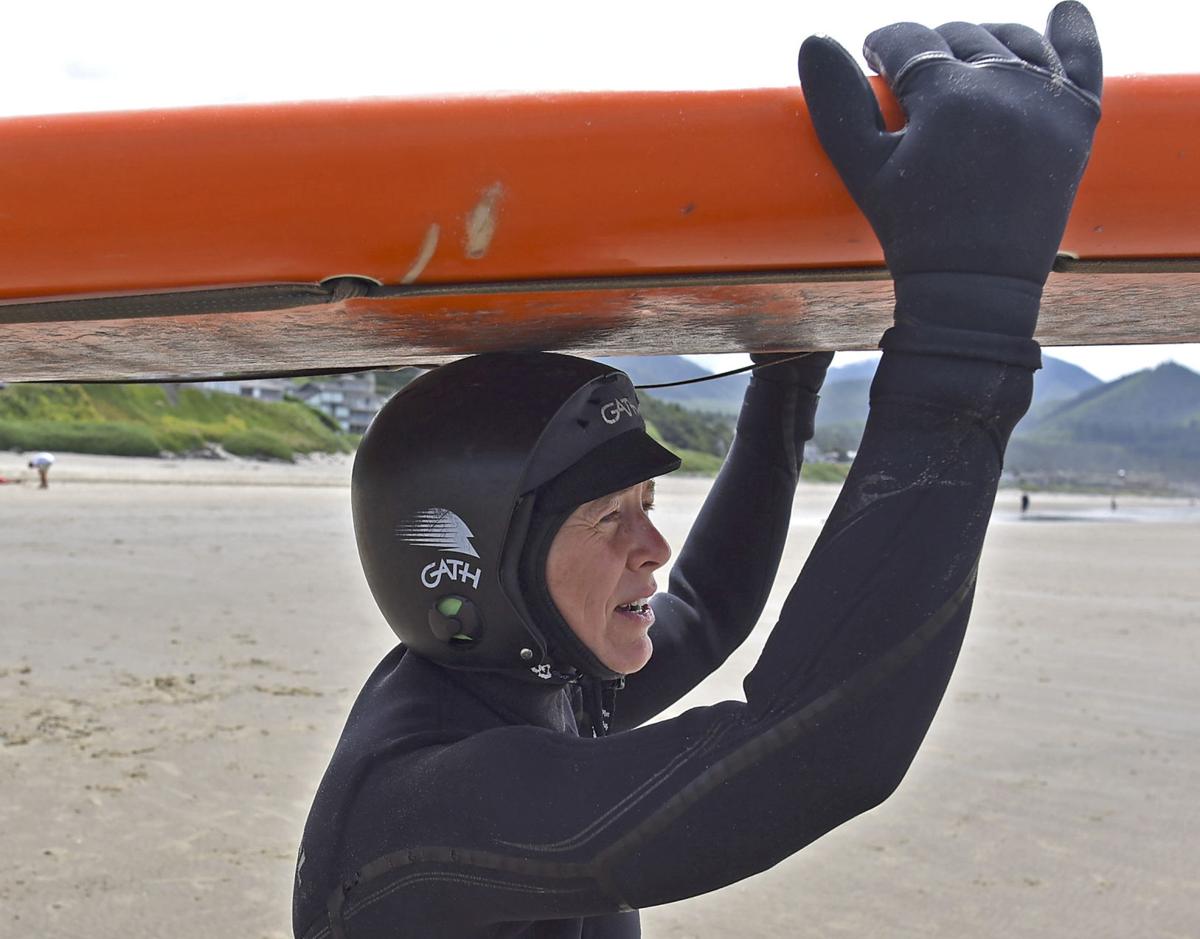 Cannon Beach lifeguard Jana McGill prepares to enter the waters near Haystack Rock for a training exercise before summer tourists crowd the beaches with swimmers. 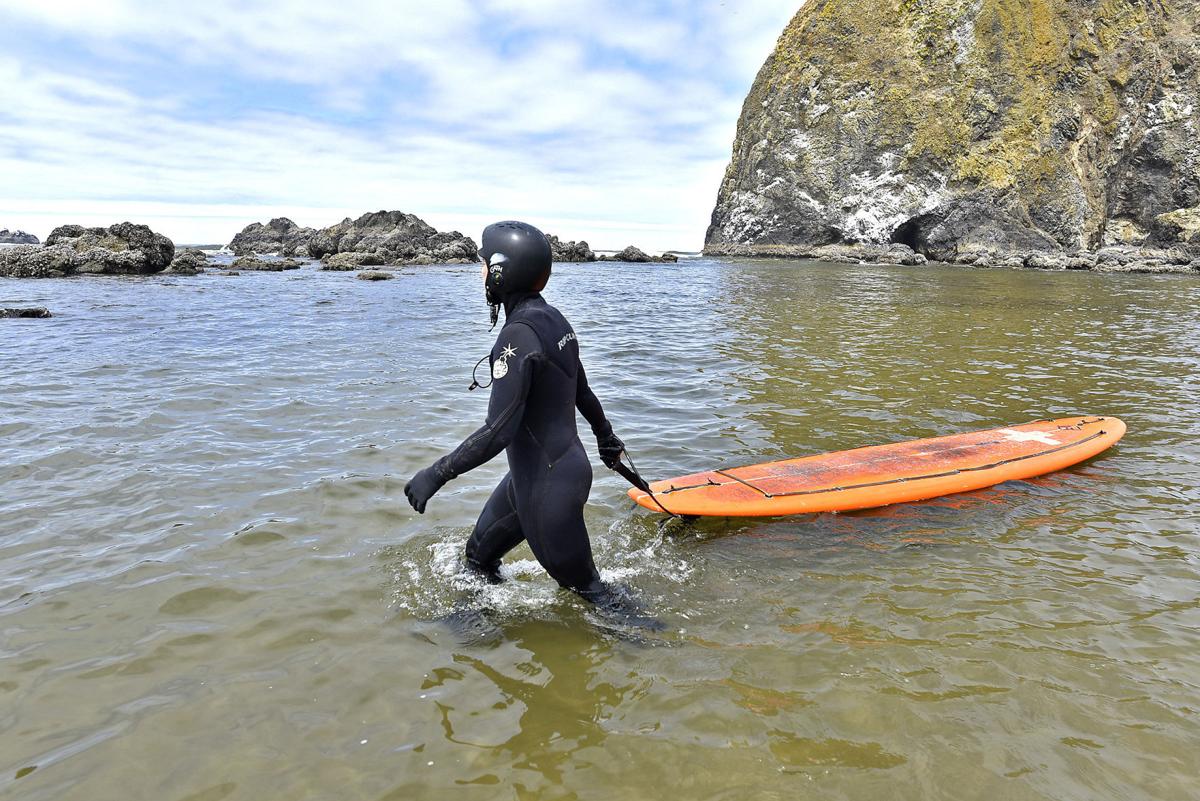 Jana McGill enters the surf near Haystack Rock in Cannon Beach while keeping a close eye on a surfer (not pictured) who was catching waves in a potentially hazardous area. McGill was entering the water with a surfboard as part of a routine training exercise.

Cannon Beach lifeguard Jesse Willyard keeps a close eye on the surf and the sand from his perch atop a lifeguard stand last week near Haystack Rock.

Jesse Willyard monitors the waters and the beaches near Haystack Rock in Cannon Beach last week. Willyard and other lifeguards are well-equipped to handle the massive numbers of tourists that visit the area in summer months.

Cannon Beach lifeguard Jesse Willyard uses binoculars and a scope to keep a watchful eye on the waters and the beaches of the area.

Cannon Beach lifeguard Jana McGill prepares to enter the waters near Haystack Rock for a training exercise before summer tourists crowd the beaches with swimmers.

Jana McGill enters the surf near Haystack Rock in Cannon Beach while keeping a close eye on a surfer (not pictured) who was catching waves in a potentially hazardous area. McGill was entering the water with a surfboard as part of a routine training exercise.

When Jesse Willyard was growing up in Cannon Beach, he didn’t have much interest in becoming a lifeguard.

But his career as one started before he was even officially hired to join the Cannon Beach lifeguard team 11 years ago during his 15th birthday party.

“I was skimboarding north of Haystack Rock when a kid ran up and said his brother had been swept up in the ocean,” Willyard said. He said he saw the child’s head bobbing up and down in the waves and decided to swim out and bring him back to shore.

The lifeguards on duty noticed his actions and brought him into the program shortly after, he said. He officially joined the summer of his 16th birthday and has been a lifeguard ever since.

“I have always been comfortable in the water. I grew up surfing,” Willyard said. “So I didn’t really worry whether or not I was going to make it — I just ran out. At the least, I thought, I could keep his head above water.

“I’ve never been afraid of the ocean,” he continued. “I suppose that’s a good quality to have in this line of work.”

Willyard is one of eight lifeguards in charge of protecting the lives of the thousands of visitors who frequent Cannon Beach during the summer. While the position is seasonal, Cannon Beach’s lifeguard team is rooted in decadeslong tradition, and upheld by a team of people dedicated to returning year after year — and for some, decade after decade.

The origin of the lifeguard program can be traced to the town’s first lifeguard in 1938, making the program almost 80 years old and one of the oldest on the West Coast. According to the historical text “Comin’ in over the Rock,” the first lifeguard, W.W. Ross, felt strongly about the town’s need for a summer lifeguard and placed collection jars around town to pay for lifeguards for several years.

While drownings are still relatively rare on the Oregon Coast, the federal Centers for Disease Control and Prevention lists drowning has the fifth-leading cause of unintentional deaths in the United States. The U.S. Lifesaving Association calculates the chance of drowning on a beach with lifeguards is 1 in 18 million.

Cannon Beach and Seaside are the only two coastal cities in Oregon with formal lifeguarding programs.

One misconception head lifeguard Brian Habecker likes to clarify is the notion of lifeguards being “beach bums” or “slackers.”

“Everyone here has a college degree or is a student pursuing one — I know at least three of us have master’s,” Habecker said. “We’re easygoing people, but very serious when it counts.”

Habecker has been a lifeguard in Cannon Beach for 15 years, the last five as leader. He describes his team as driven, hard-working and all with similar passions and perspectives on recreating in the ocean. These similarities are by design, he said.

“Part of the reason we are such a strong team is because we recruit locally,” Habecker said. “I taught Jesse as a sixth-grade student, and when he got into college, I asked him to apply for the job.”

It’s a pattern that has worked well. Habecker himself, an English teacher at Broadway Middle School, was recruited by John Rippey, who at the time was an educational assistant when he was a student and head lifeguard for 25 years. Generations of recruitment turned into one large, locally grown family, he said.

“There is a total respect and bond in this group,” Habecker said.

Up in the tower, Willyard said much of his day is spent meticulously scanning the beach, and answering questions like “Where is the bathroom?” and “Why are there dead birds on the beach?”

Getting to work where he likes to play isn’t a bad perk either, he said.

“It’s one of the best summer jobs around,” he said.

But hours of training go into preparing for the rescues that Habecker said average about one a month. Because there are only two beach towns with formal lifeguards, much of the training regimen has been passed down generation to generation, largely created and directed by the staff themselves, Habecker said.

Every morning in the summer, lifeguards do a half hour of either cardio or weightlifting with Cannon Beach Fire and Rescue. Before the season starts, the group meets in June to learn first aid, conduct mock rescues out in riptides and rocks and swimming drills that require lifeguards to swim all the way around Haystack Rock.

But every year is different. Some years Willyard has only seen close calls, others as high as 20. He has done only a handful of rescues, but described each one as a shot of adrenaline, and then a wave of relief.

”It can be hectic, but luckily we have people who have been here multiple seasons,” Willyard said. “It’s about paying attention to every person.”

In most cases, the goal is to focus on preventative measures: namely, educating folks not to turn their back to the water, identifying rip currents and warning beachgoers to stay away from those areas. But when that isn’t an option, Willyard and Habecker both said the most common rescue scenario involves beachgoers getting caught in strong currents.

“The more you do it, the less daunting it is,” Habecker said. “What other people see as heroic, we find exciting. The ocean brings a lot of fear because of the unknowns, and people assume we have the same fear, but for us it’s not an unknown.”

But moments of reward and exhilaration are also humbled by the reality of when situations do go wrong, like the Oklahoma teen who drowned in Seaside last year.

“Out here, it is the expectation that nothing goes wrong,” Habecker said. “If something does go wrong, you have to be able to take the ownership of that on. And that’s what separates our jobs from many others.”

During his 20-year tenure as a Cannon Beach lifeguard, Jim Babson got to see the program evolve.

When he started his first summer while he was a student at University of Oregon, it was him and one other lifeguard living in bunks in the fire station. He started at around $200 a month for seven days a week of work. After that summer he became a track coach and high school teacher in Gresham, yet still found himself back in Cannon Beach lifeguarding every summer until 1993, where he earned the title “lifeguard emeritus” for his years of service.

For Babson, what kept him coming back was the family-like feel.

“I just enjoyed the physical challenge, and if you got to pull a few people out of the water, that’s rewarding, too,” Babson said. “We had it easier back then, though. There were way fewer people on the beach than today.”

Peter Lindsey, lifelong resident and the author of “Comin’ in Over the Rock,” wrote about Cannon Beach’s lifeguarding program in his historical work, drawing information from his mother, a lifeguard in the 1930s, and from friends like Babson whom he met lifeguarding himself.

“It always seemed to be kind of a focal point in the community — a point of pride,” he said. “The community has always cared about the safety of this place. It just seemed natural.”

Habecker, 46, is starting to pave the way to a graceful exit from the program. But after 15 years, he feels comfortable leaving the program to the students like Jesse Willyard.

“Watching my students grow into the quality people just further rewards my career as a teacher. They’re some of my best friends,” he said. “This kind of bond is something you really only get in a small town like Cannon Beach. It’s ideal — and it has taken many years to get that way.”