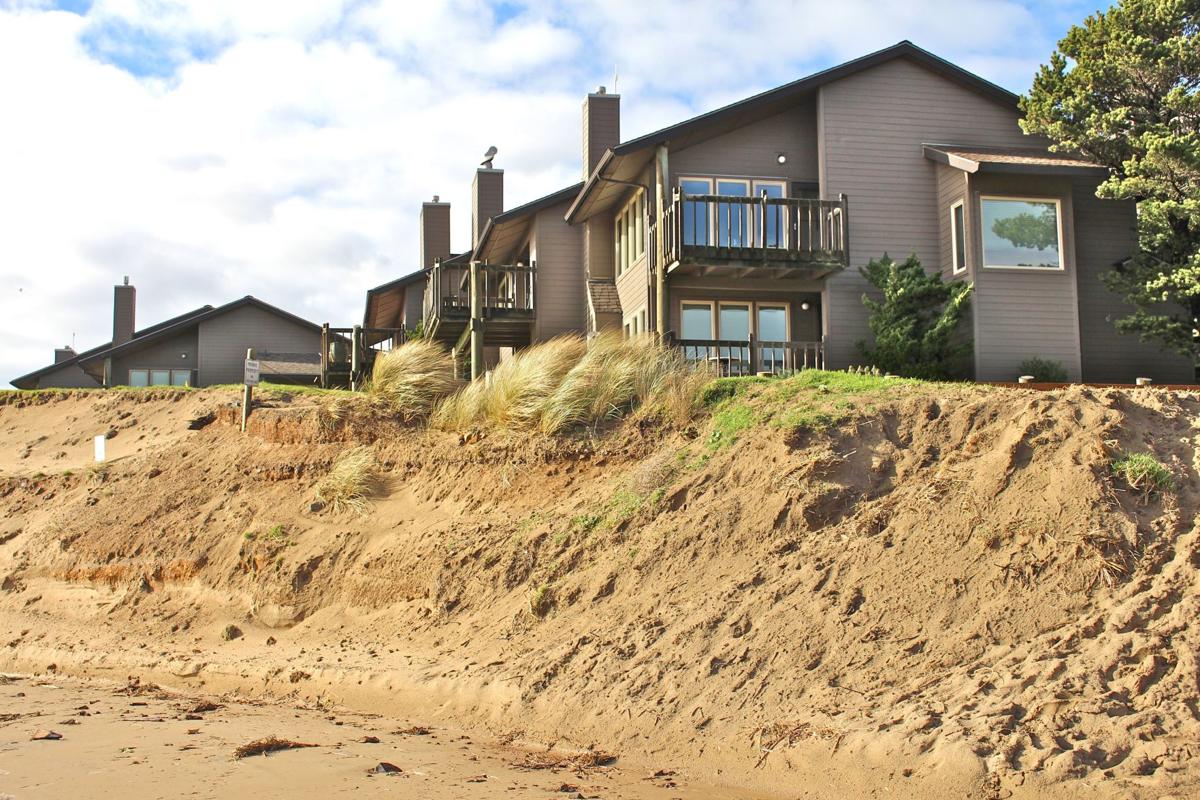 Erosion along the Ecola Creek Estuary is encroaching on Breakers Point Building 45. In lieu of packing down sand harvested from dune grading to shore it up, the homeowners association may use riprap, consisting of a 30-foot line of boulders stacked 7 feet high. 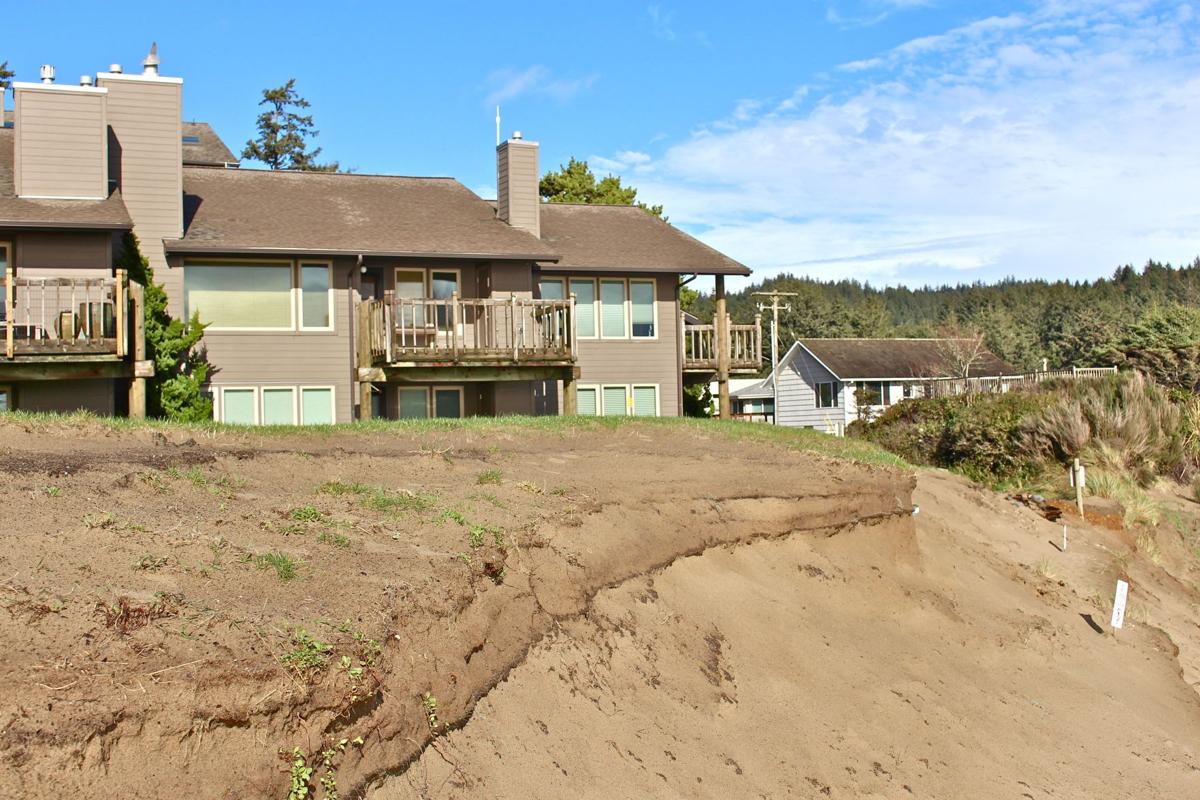 Sand continues to fall away from Breakers Point Building 45, threatening the possibility that the building could begin to slip into the Ecola Creek Estuary. 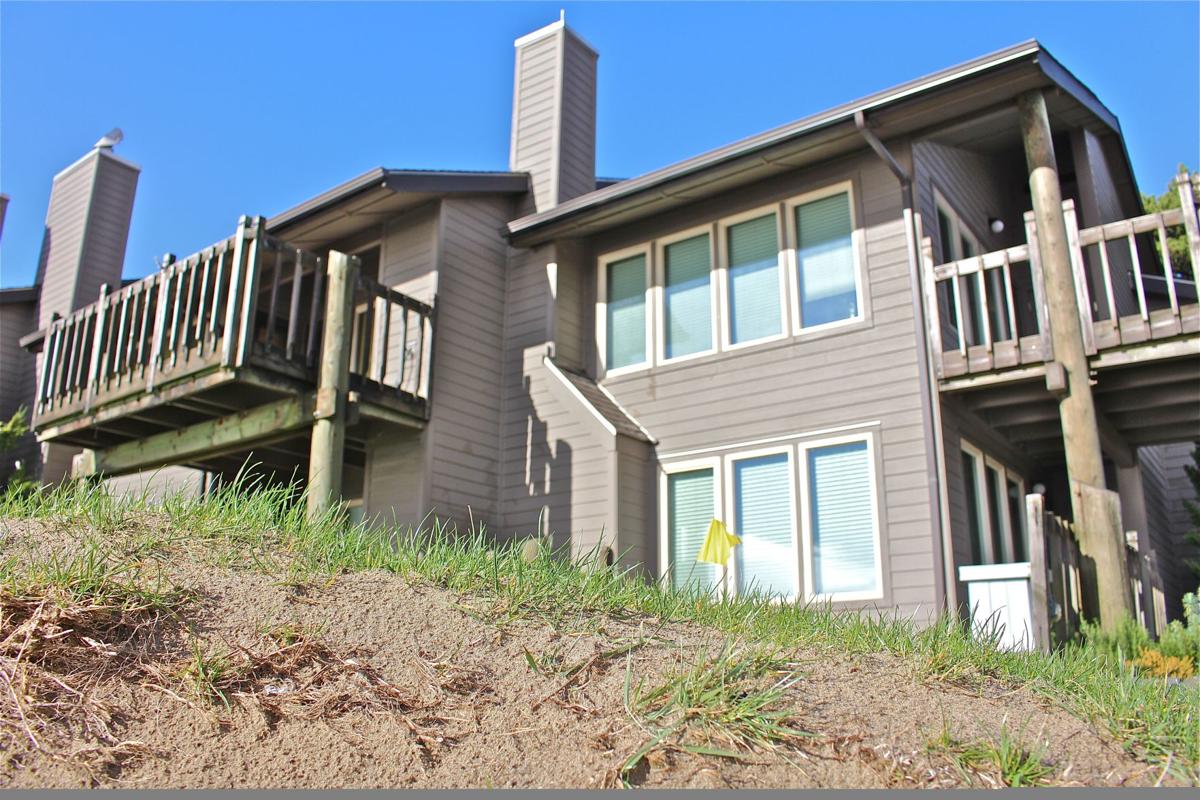 Gas lines beneath building 45, marked by little yellow flags, may soon be exposed as the Ecola Creek Estuary continues to erode.

Erosion along the Ecola Creek Estuary is encroaching on Breakers Point Building 45. In lieu of packing down sand harvested from dune grading to shore it up, the homeowners association may use riprap, consisting of a 30-foot line of boulders stacked 7 feet high.

Sand continues to fall away from Breakers Point Building 45, threatening the possibility that the building could begin to slip into the Ecola Creek Estuary.

Gas lines beneath building 45, marked by little yellow flags, may soon be exposed as the Ecola Creek Estuary continues to erode.

Unless the Breakers Point Homeowners Association gets City Council permission to deposit several thousand cubic yards of sand onto the embankment of the Ecola Creek Estuary, thereby shoring up a nearby condominium whose foundation is being compromised by erosion, emergency riprap may have to be placed there instead.

Inch by inch, the steep northern slope of the estuary is sloughing away, edging steadily closer to building No. 45 at the south end of Larch Street. Without intervention, the two-story wood-frame building and the gas main beneath it will become endangered, according to an engineering report from January 2014.

“The erosion has taken place pretty severely,” said Bruce Francis, property manager of the Breakers Point condos. “It’s moved in quite a ways.”

“If we see another couple of feet disappear, what will happen is the gas line will be exposed, and I think that it would be very prudent for us to take action,” he said.

Taking action will involve hiring contractors to lay down riprap — large boulders stacked on a gravel base — in the bank below the building. The pile of boulders would stretch 30 feet long, stand 7 feet tall and cut 5 feet deep into the bank, he said.

Last month, the planning commission denied the association’s proposal to grade nearly 74,000 cubic yards of sand dunes west and south of Breakers Point, a proposal that originally included shifting 7,000 cubic yards of the graded sand onto the estuary bank to stabilize building No. 45.

The association plans to appeal the decision to the City Council at its March 3 meeting, Francis said.

“We are still being patient, hoping that we will get the go-ahead to put sand there.”

Nonetheless, the city’s municipal code allows property owners to place riprap without a permit “to protect buildings from imminent threat.”

“From the city’s point of view, if there’s an emergency, don’t wait for us. Go do what you need to do,” City Planner Mark Barnes said.

In fact, ever since the erosion had brought the estuary bank within 25 feet of the building, Breakers Point has had the legal right to go that route.

“That’s within the law, and if we see our property’s being compromised, we will take that action,” Francis said.

The association would have to notify the city, the Oregon Division of State Lands and the U.S. Army Corps of Engineers. The association may also have to alter or remove the riprap to conform to city and state standards.

For now, though, “we’re trying to work with City Hall. That’s the bottom line,” Francis added.

If the council upholds the planning commission’s denial, Breakers Point may take the case to the state Land Use Board of Appeals, he said. Another possibility is that the council will direct Breakers Point to modify its request, perhaps allowing the homeowners association to dump, say, 5,000 rather than 7,000 cubic yards onto the bank.

“It’s all up to what kind of motions they craft,” he said.

For the past 30 years, the homeowners association has dealt with the erosion by intermittently packing up to 50 cubic yards of sand onto the bank, sometimes doing it half a dozen times a year, Francis said. The sand — harvested from the lawns, gardens, walkways, patios and elsewhere in and around the complex — would get washed out into the sedimentation system and renourish the beach.

“That’s the beauty of the situation,” he said. “You are returning it to the system, and you will maintain the stability of the bank.”

Later on, the association and the city got a joint permit from the Division of State Lands to place up to 7,000 cubic yards of sand on the bank. In 2009-10 Breakers Point ended up putting a total of 4,500 cubic yards there.

No sand has been placed there since, however. In the past five years, erosion — aided by humans, animals, storms and the creek itself — has reshaped the estuary.

“Whenever we go out there it’s never the same,” said Carol Keljo, who owns unit 451 in building No. 45 with her husband, Tom Keljo.

In 2014, the city didn’t renew its joint permit with Breakers Point, which is why the homeowners association included the estuary stabilization as part of its dune grading plan

The erosion has reached a point where sand and riprap may be the only remedies, Francis said.

“Riprap is the last choice in how you deal with that problem,” Barnes said, adding that “it’s not something you do rashly.” “The presumption is that you don’t have other options.”

The use of riprap is a notoriously divisive issue.

On one hand, it’s a permanent armored structure that protects waterfront buildings from the effects of erosion, Barnes said. Once the riprap is installed, “you don’t have to worry about (the) sandbank caving away under your porch anymore,” he said.

On the other hand, “if you look elsewhere on the Oregon Coast where this has been done, you often get erosion at the ends of riprap projects, upstream or downstream,” Barnes said. “There’s some real hydraulic and erosion effects of riprap that are poorly understood and difficult to predict.”

Since riprap is a hard surface, it can strongly accelerate or deflect a stream’s current, said Jerome Arnold, vice chairman of the Ecola Creek Watershed Council.

Waves that bounce off riprap “travel upstream with considerably more force” than those that hit piles of sand, he said.

There can also be environmental drawbacks. Habitat that might have supported birds and small mammals gets eliminated, Barnes said.

Riprap has an aesthetic impact as well. The embankment “no longer looks like a natural sand bank. It just looks like a pile of gray rocks,” he said.

However, Frances said Breakers Point plans to regularly push sand over the riprap, both to maintain the sand bank “look” and to return sand to the beach. “That would be my preference,” he said.

“I’m against putting both sand and riprap in there. I was against them building the condominiums in the first place,” said Arnold, speaking for himself rather than the watershed council. “Eventually, they’re going to lose. The ocean puts to shame all the things that humans can throw against it. It’s kind of futile and disruptive.”

The Keljos, who also live in Vancouver, Wash., are delighted that Breakers Point may end up putting riprap along the bank, Carol Keljo said.

“My thought was that the riprap will be much more secure. The waves won’t be washing it out. The kids won’t be playing on it. I kind of doubt the elk will be coming up that way,” she said. “I think it makes a lot more sense.”

They both feel that riprap is a better, long-term solution to the erosion of their property than the dumping of sand, which can only be a temporary fix to a never-ending problem.

The homeowners association hasn’t submitted the paperwork to officially appeal the planning commission’s denial to the City Council, but it will soon, Francis said.

“We are still biding our time, which is running out rapidly,” he said. “The erosion is not stopping.”