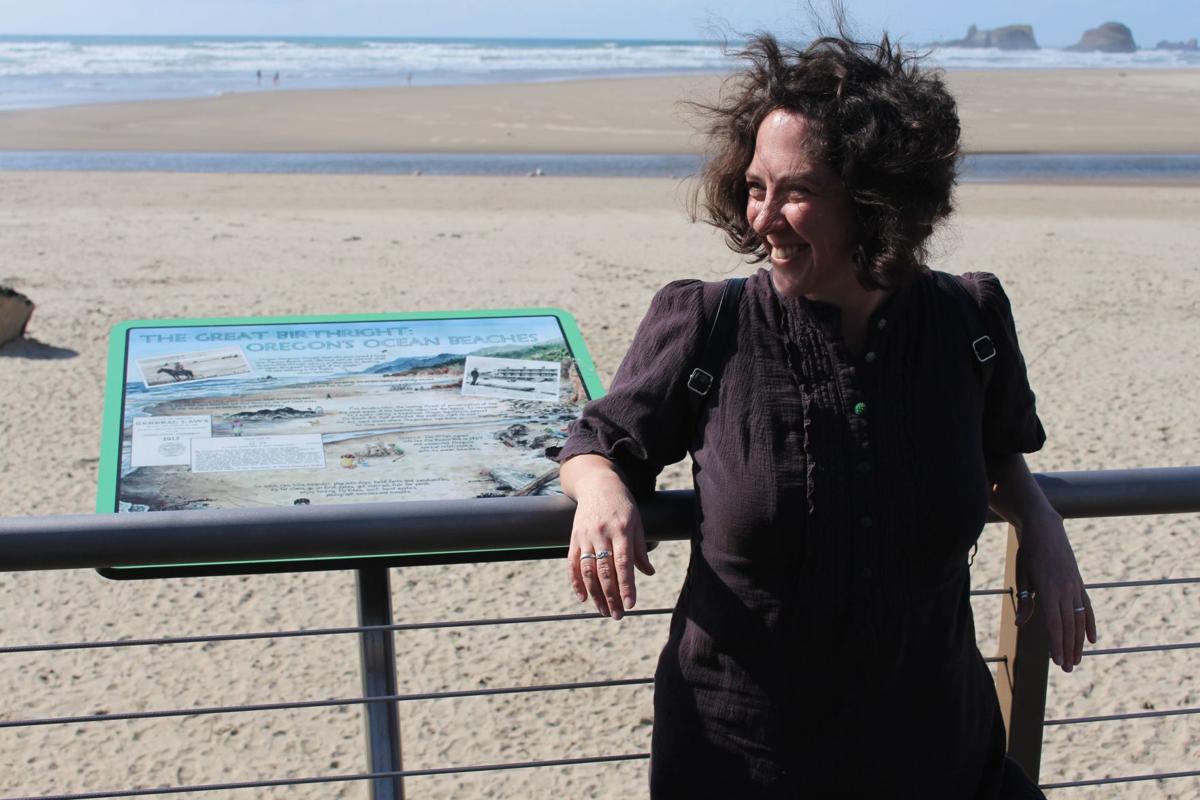 A windblown Sally Lackaff stands before the newly mounted Beach Bill sign, for which she did the pencil-and-watercolor artwork. Lackaff also did the artwork for the interpretive signs along the Cannon Beach Nature Trail, unveiled last year. 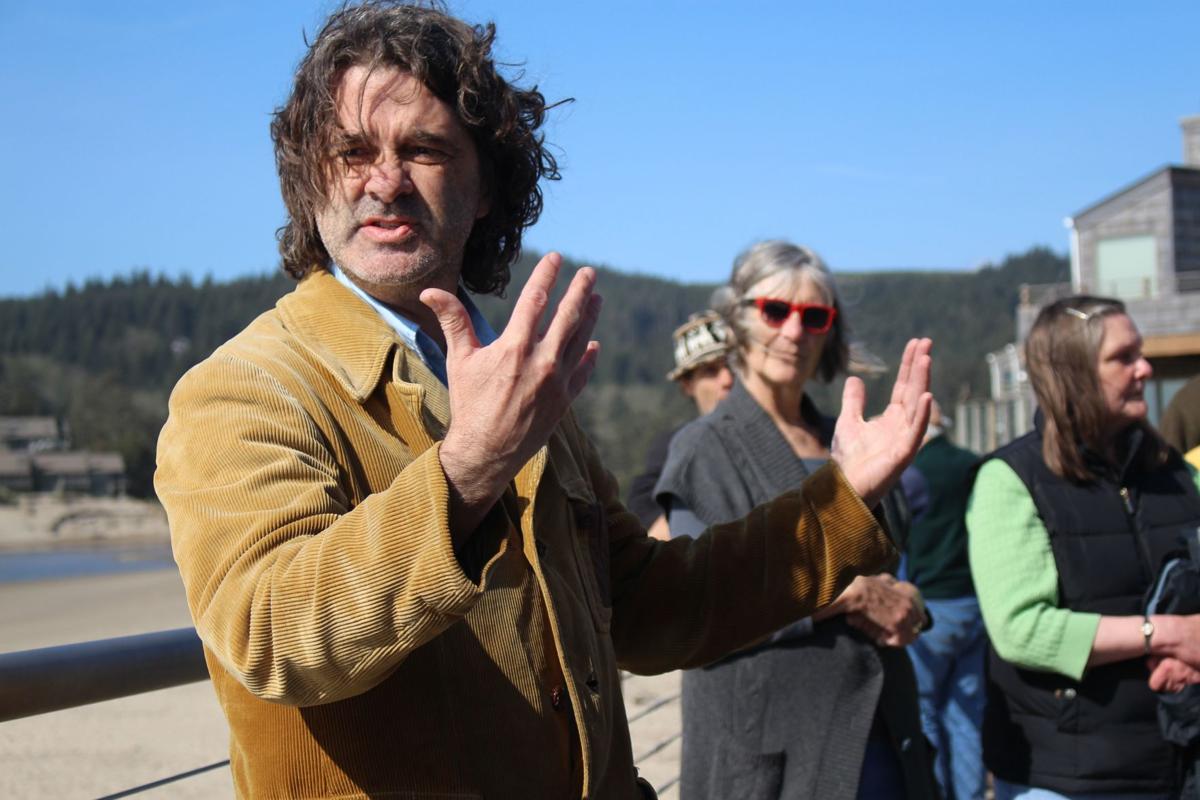 Matt Love, the Astoria writer who penned (anonymously) the text for Cannon Beach's Beach Bill interpretive sign, talks about the importance of Oregon's public beaches. The sign stands near the railing platform at the west end of Second Street.

A windblown Sally Lackaff stands before the newly mounted Beach Bill sign, for which she did the pencil-and-watercolor artwork. Lackaff also did the artwork for the interpretive signs along the Cannon Beach Nature Trail, unveiled last year.

Matt Love, the Astoria writer who penned (anonymously) the text for Cannon Beach's Beach Bill interpretive sign, talks about the importance of Oregon's public beaches. The sign stands near the railing platform at the west end of Second Street.

Now, when Oregonians and out-of-staters play and plod along the beach near Second Street, they do so in the presence of the only known interpretive sign honoring the legislation that gave the public that right.

In 1967, Governor Tom McCall signed the Oregon Beach Bill, which granted the public recreational access to the state’s beaches from the water to the vegetation line. The bill finished the job of Governor Oswald West, who, in 1913, classified Oregon’s 363-mile coastline as a public highway and thus kept it free from commercial use.

Thanks to those two governors, Oregonians became the proud owners of some of the most open and accessible beaches in the United States.

The sign features illustrated photographs of McCall and West, and replicas of their game-changing documents, against a tableau of beachy pastimes (flying kites, building sandcastles, collecting agates, etc.) drawn in pencil and watercolor by Sally Lackaff, an Astoria artist.

Lackaff — who was born in Cannon Beach and has lived on the North Coast since she graduated from high school — said that, as a child, “it just never occurred to me how special it was to have a beach like this for everyone to play on,” she said. “You just take things for granted until you learn about them.”

Last winter, Matt Love — the Astoria-based writer and publisher who penned the uncredited text for the sign — mentioned during a public lecture that not a single public sign in Oregon commemorated the landmark legislation of 1967.

The parks committee, and its Twelve Days of Earth Day subcommittee, ran with the idea. The final plywood panel is headlined: “The Great Birthright: Oregon’s Ocean Beaches.”

“Four and a half months from conversation to dedication has got to be some kind of record,” Love said. “The people of Cannon Beach moved it, and it was incredible how this happened.”

Composing the copy for the sign — which Lackaff hand-wrote in ink for the original artwork — proved to be an emotional experience for Love.

“I don’t think I ever would have become a writer, or an Oregonian of merit, if I hadn’t had this ...” he said, gesturing toward the beach. “The access at all hours, all day and night, where you never have to pay a cent to go. And it matters to people who don’t have the money, that can’t check into the motels.”

Love, who has documented Oregon’s legacy of publicly owned beaches, introduced the attendees to Blair Kramer, the son of the late Associated Press reporter Matt Kramer whose coverage of the Beach Bill help galvanize public support for it.

In Oswald West State Park lies a memorial to Matt Kramer and his service to Oregon journalism. That memorial, the plaque of Oswald West at the overlook of Neahkahnie Mountain and, now, the Beach Bill sign compose, in Love’s mind, a “holy triptych” of Oregon’s conservationist values, he said.

Courtland Carrier, executive director of the Cannon Beach Chamber of Commerce, spoke of the relationship between private and public entities.

“It may be sacrilege for me to be saying this, but, as a person who represents business, this is the greatest example of noncommercial activity that you can imagine. Were it not for (Oregon’s public beaches), many of our commercial businesses would not exist,” he said. “Thank God for noncommercial activities.”

City Manger Brant Kucera, spent many years working in Michigan, a state surrounded by water. Up close, the Great Lakes look very much like oceans, he said, and he always thought it was a shame that so much of that state’s lakefront is privately held.

“I think it’s a really terrible thing for the public not to have access to the environment, because that’s how we connect with our environment, is actually being out, physically, in it,” he said. “And I just think how visionary that is, for the state to ensure that people will forever be able to enjoy this.”

For good measure, Love recited a quote that he considers “Oregon scripture” — the line that Oswald West uttered when he signed the 1913 bill and is now written beneath the banner of Cannon Beach’s “Beach Bill” sign:

“No local selfish interest should be permitted, through politics or otherwise, to destroy or impair this great birthright of our people.”

“This is the great birthright,” he said, “right here behind us.”