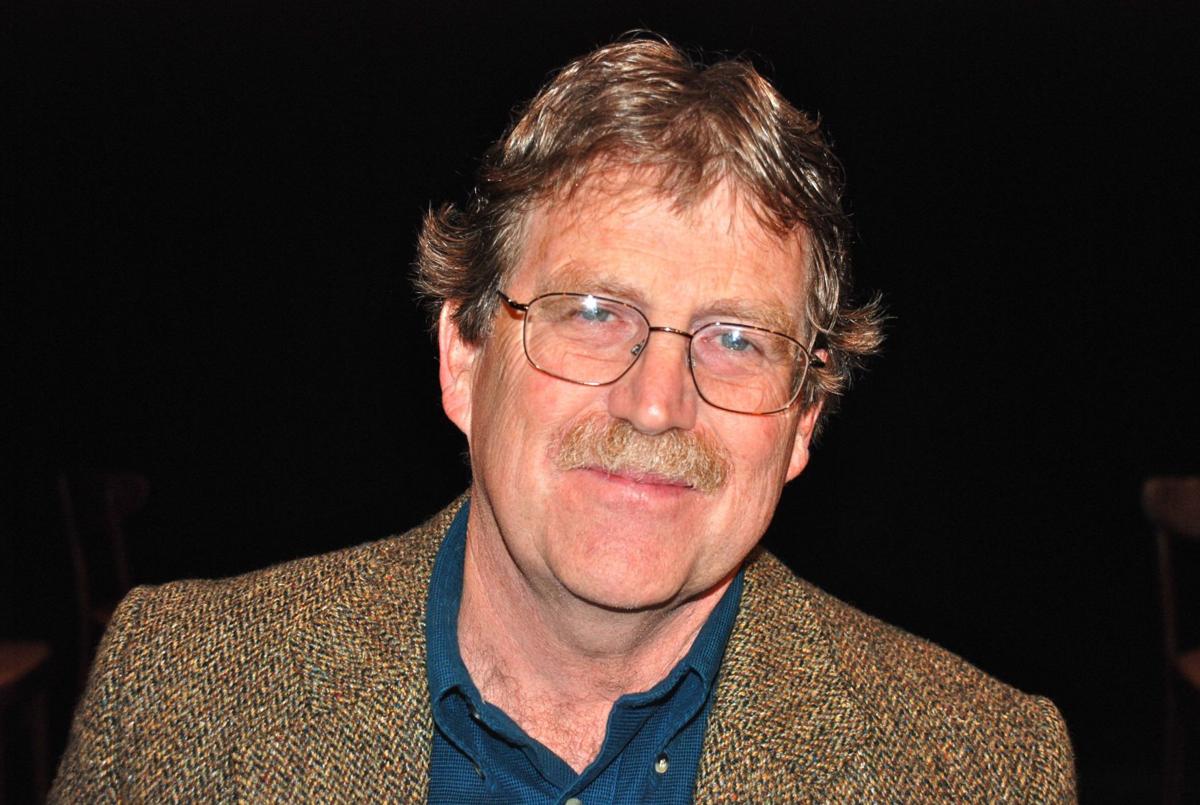 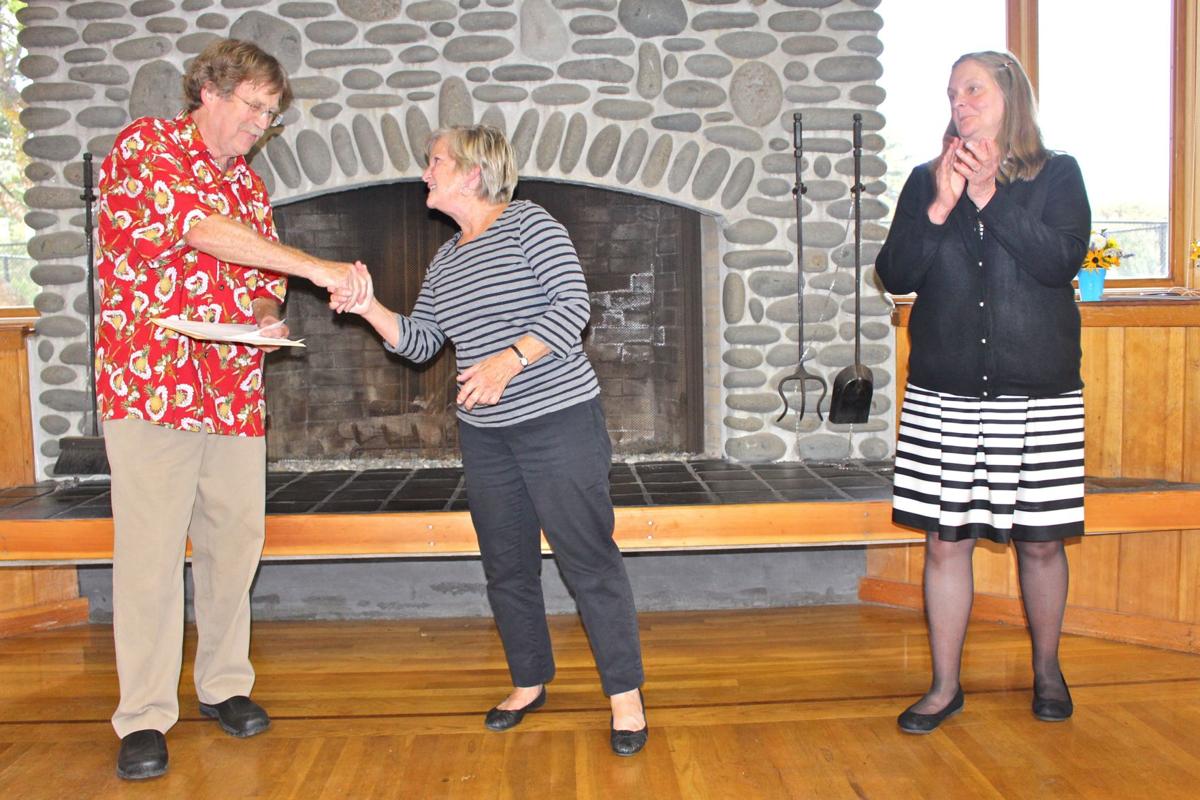 ERICK BENGEL PHOTO Judy Wood, center, co-president of the Cannon Beach Library board, shakes Mayor Mike Morgan's hand before picking up a $12,193.17 check from Barb Knop, right, for the library. 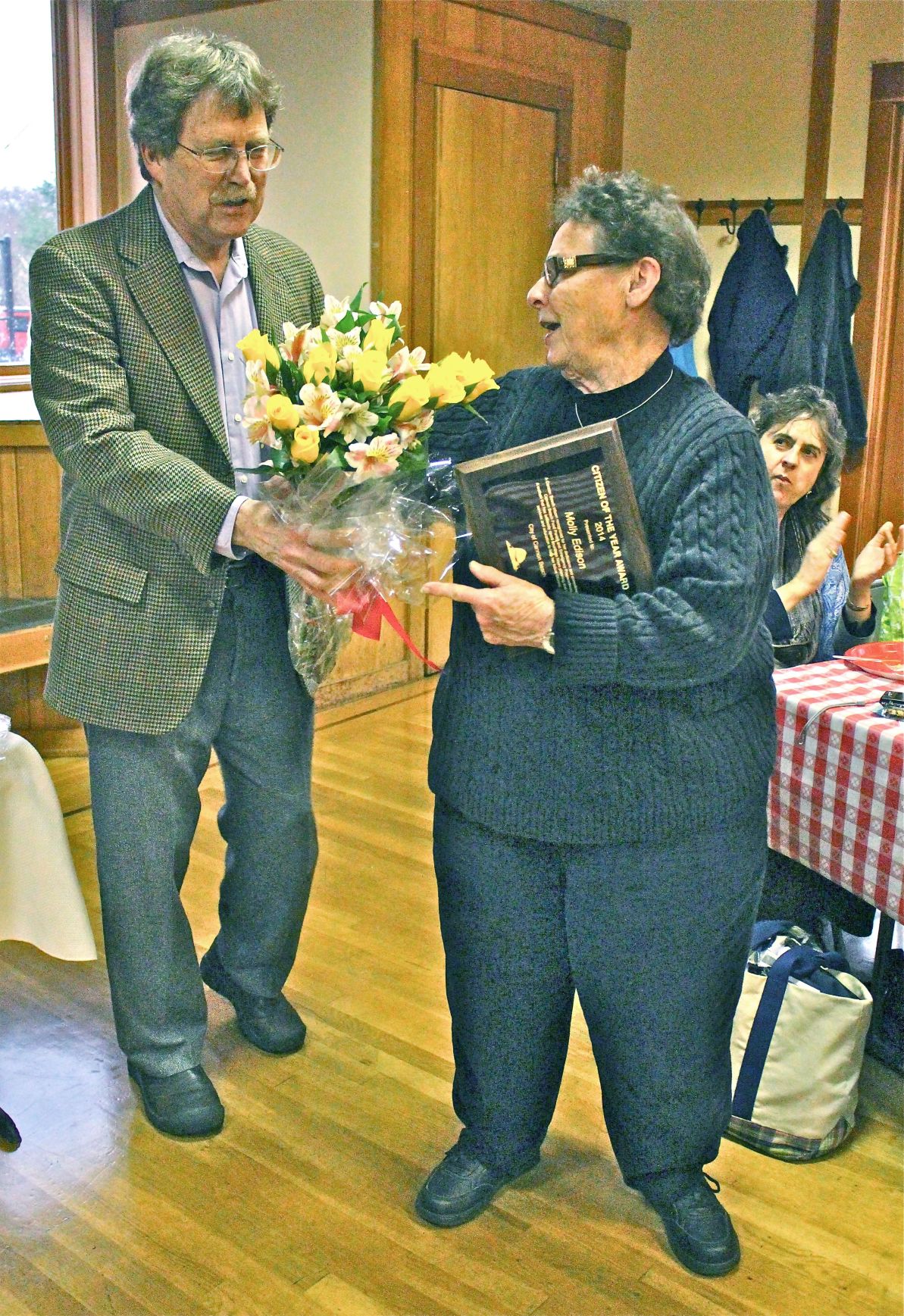 Molly Edison, right, receives the Citizen of the Year Award from Mayor Mike Morgan at the city's Volunteer Appreciation Night 2014. Edison, manager of the Cannon Beach Food Pantry, was honored for her work on the city's emergency preparedness committee, design review board and the parks and community services committee, among other activities. 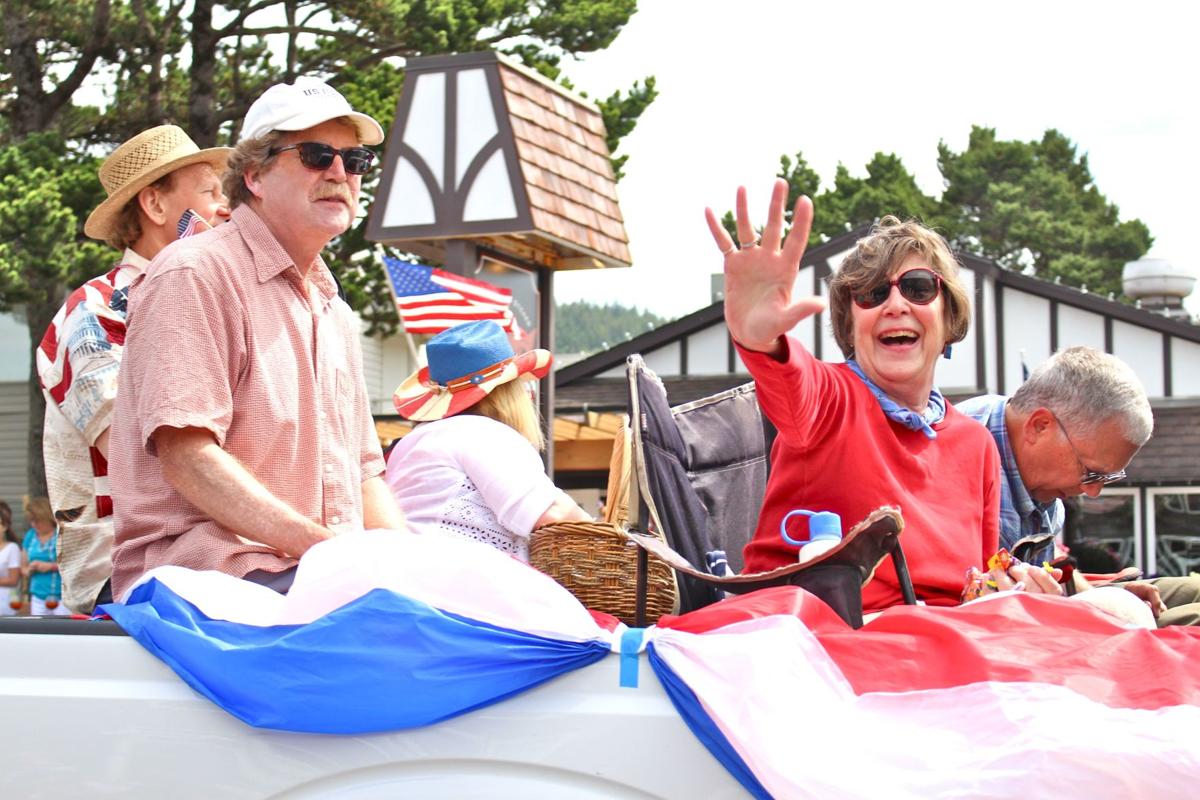 ERICK BENGEL PHOTO Judy Wood, center, co-president of the Cannon Beach Library board, shakes Mayor Mike Morgan's hand before picking up a $12,193.17 check from Barb Knop, right, for the library.

Molly Edison, right, receives the Citizen of the Year Award from Mayor Mike Morgan at the city's Volunteer Appreciation Night 2014. Edison, manager of the Cannon Beach Food Pantry, was honored for her work on the city's emergency preparedness committee, design review board and the parks and community services committee, among other activities.

Even as Mayor Mike Morgan prepares to pass the gavel to Mayor-elect Sam Steidel, Morgan — now vacationing in Hawaii with his wife, Beth Holland — doesn’t have an answer to the question: What will his six-year mayorship be remembered for?

“I don’t know if people will remember me, period,” he said. “Ashes to ashes and dust to dust, you know? I’ll just be a moldy photograph on the wall at City Hall.”

When Morgan became mayor in 2009, he followed Jay Raskin, who, as City Council president, was appointed interim mayor when former Mayor John Williams died in 2008. Morgan ran unopposed in 2010.

“Anytime somebody puts their name on the ballot and takes that risk of public humiliation, I think that says a lot for them,” said retired Cannon Beach City Manager Rich Mays. “Mike certainly did that twice.”

He led the council as the city added more than 800 acres to the Ecola Creek Forest Reserve, acquired the 55-acre South Wind property in Tolovana and set up its Tourism and Arts Fund, which has helped local arts organizations throw special events to draw visitors from more than 50 miles away.

Mays said that “all the things that people give me credit for, he should get credit for, too: the (city) trail, the Tourism and Arts Commission, the Ecola Reserve — all of that ... I think we made good team.”

Meanwhile, Cannon Beach weathered the Great Recession, watched the Seaside School District close its elementary school and, last summer, coped with the first murder in town in about two decades.

As mayor, Morgan tried to set a civil tone. He said he thinks people may remember that — the civility of the City Council discussions, exemplified in his “Be Nice” sign that he places on the dais before every council meeting.

“Life is too short to get angry about issues — city issues or any issues except for life and death,” he said. “I’m not saying city politics are low stakes, but life is short. We can’t be mad at each other over things. You win some, you lose some, and life goes on. So I think civility is important.”

Morgan could have run for a second term, but “I thought six years was plenty. I mean, it’s a lot of work,” he said. “Although it’s been very enjoyable, I think six years is fine for anybody. It should probably be one six-year term rather than four (years).”

Now that he won’t be required to attend at least two city meetings per month, Morgan hopes to be able to travel more, he said.

After he returns from vacation, Morgan will serve as Astoria’s interim city planner, filling in for Rosemary Johnson, who is retiring. Morgan was the Astoria city planner from 1987 to 1991.

He will also work for Astoria’s planning department while the city looks for a new community development director.

“I think he did a great job as mayor, and I think we complemented each other really well,” Mays said. “I think people will look back on our administration — him and I and the rest of the City Council ... as getting a lot done, and his legacy is one of getting things done.”

If Morgan had another term ahead of him, he knows what his agenda would be.

He would try to bring more property into the Ecola Creek Forest Reserve. He would work to address the city’s paucity of affordable housing for median-income earners.

And, though he is proud of his role in forming the Tourism and Arts Fund, that fund, which collects a portions of the city’s lodging taxes, can only be used to finance events intended to bring tourists into town. He said he hopes the city will find a way to free up money in the general fund to support the arts organizations, like the Coaster Theatre and the Tolovana Arts Colony, directly.

“They’re all understaffed and underpaid, and I think we need to put some money in their coffers so they can do year-round arts activities,” he said.

The need to reform the Port of Astoria has been one of Morgan’s pet causes lately and will continue to be so after he leaves office, he said.

He, Seaside Mayor Don Larson and Gearhart Mayor Dianne Widdop, along with county business leaders and others, are putting together an initiative to make members of the Port Commission governor-appointed rather than locally elected. The aim is to ensure the port is managed by specialists rather than “local good guys or gals,” and that South County is better represented.

Once he’s off the City Council, Morgan plans to approach the council with a resolution supporting the initiative.

“If people with specific areas of expertise were on the Port Commission, it would be better than it is now. There are too many bad decisions being made, too many conflicts of interest and most of the people that should be on the commission have better things to do than spend their time running for office,” he said. “But if the governor recruited them, I think it would be a better group.”

What about Morgan’s regrets? Is there anything he would have done differently as mayor?

Morgan said it bothers him that the council’s vote to allow hunting in the Ecola Creek Forest Reserve became “probably our most divisive issue” during his mayorship.

In January 2013, Morgan voted with the majority when the council approved the practice of hunting elk and deer with either bows and arrows or shotguns with slugs in the reserve over the next five years.

But after only two people had purchased hunting permits and several citizens had publicly expressed outrage with the decision, the council voted earlier this year to end the hunting period prematurely.

“If there had been a ton of people clamoring to chase elk around in the reserve with a bow and arrow, I would have probably extended it, but it just seemed so senseless,” he said. “I kind of regret that it became such a nasty issue.”

Morgan said he hasn’t needed to give Steidel very much mayoral advice.

Steidel, after all, is a former City Councilor who has served on the planning commission and the design review board. He is also a current member of the emergency preparedness committee and its subcommittee that manages and expands the tsunami barrel program.

Cannon Beach’s new mayor, therefore, won’t have much of a learning curve, Morgan said. “He knows where the bodies are buried, and I think he can step right in.”

“I have been very appreciative of being able to serve ... especially with such a great group of people,” he said.

Former Interim City Manager Jennie Messmer once remarked to Morgan that the council gets along, something that certainly isn’t true of every local government, Morgan said.

“The fact that we don’t have any financial worries takes a lot of pressure off. We can do things like public art and tourism promotion,” he said. “We’re a very lucky little community.”