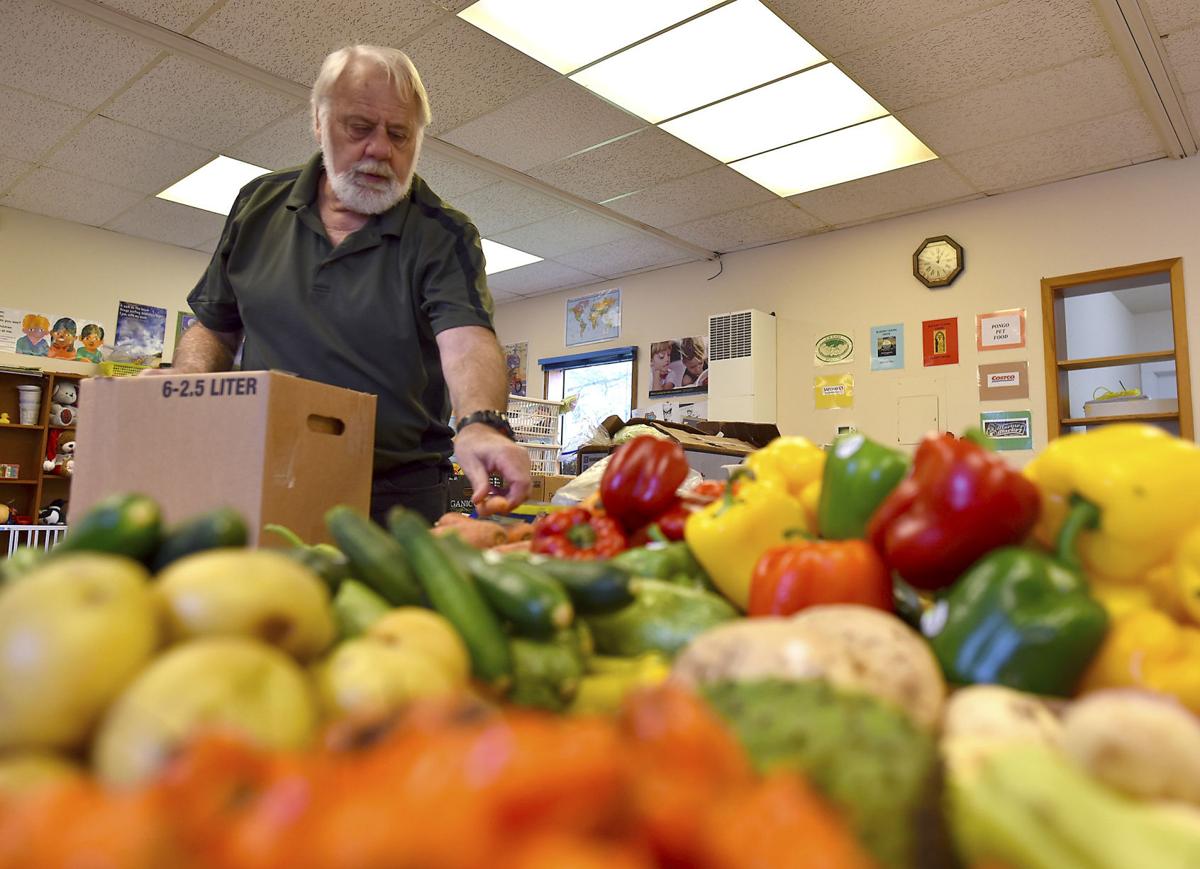 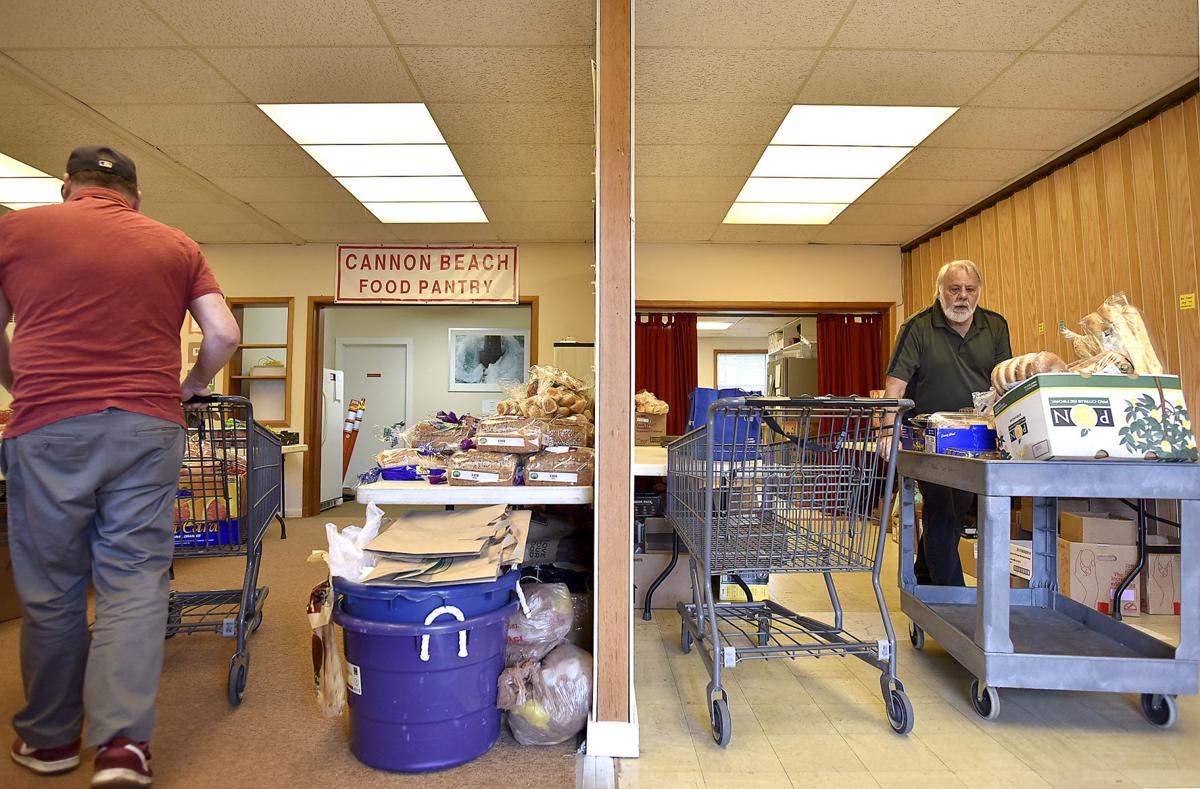 David Kinhan and Rock Wickham prepare the Cannon Beach Food Pantry for those in need. 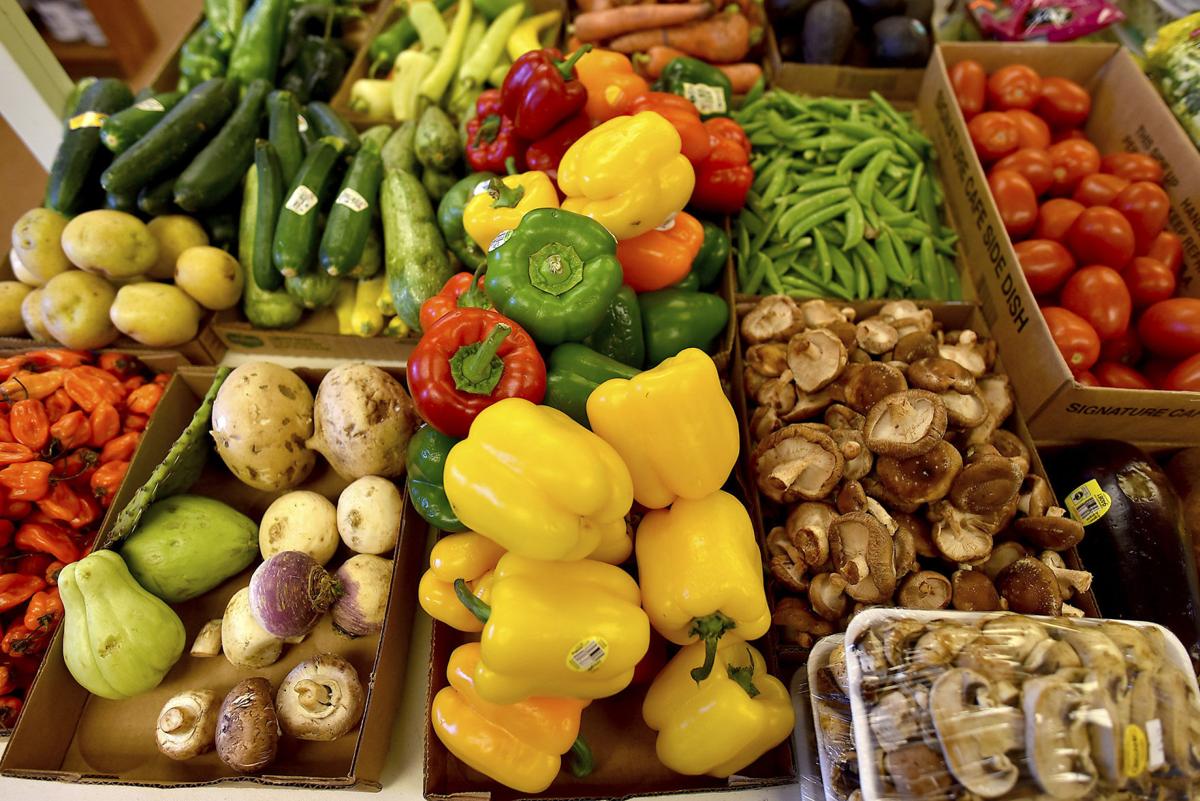 Produce sits out on a table at the Cannon Beach Food Pantry. 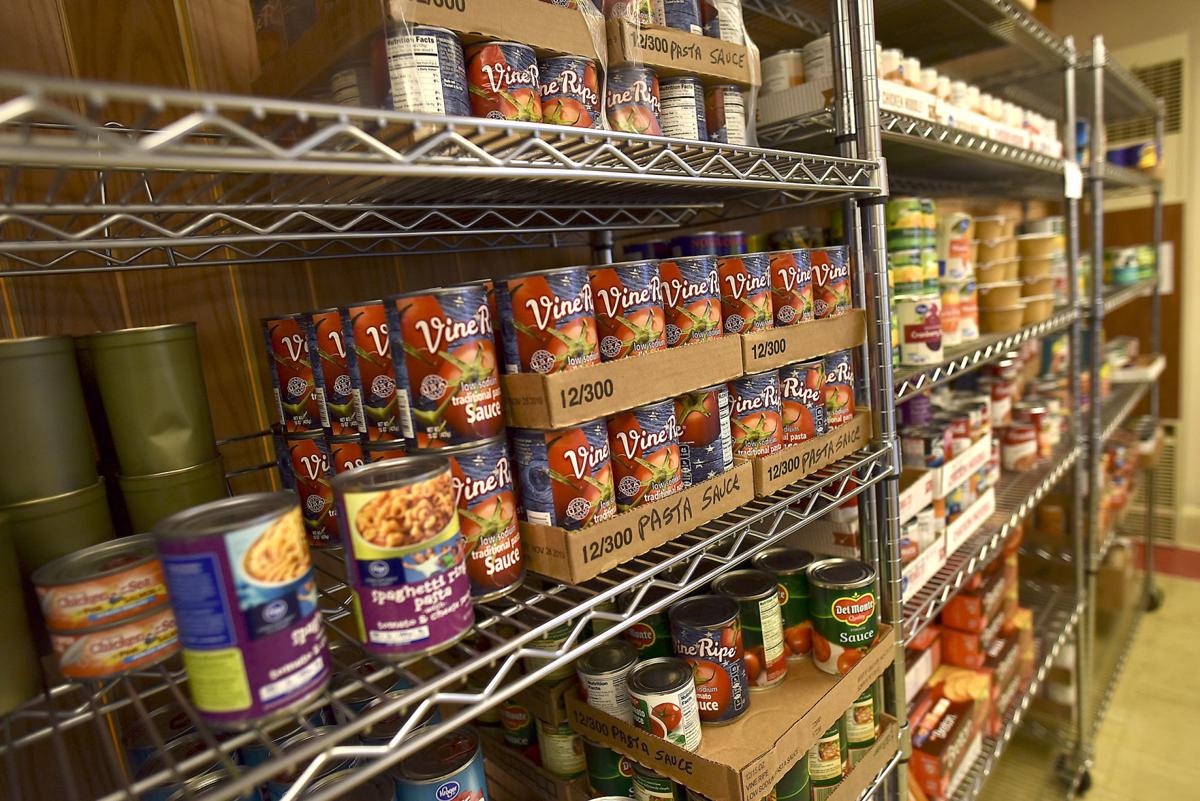 Canned goods line the shelves of the dry storage room at the Cannon Beach Food Pantry. 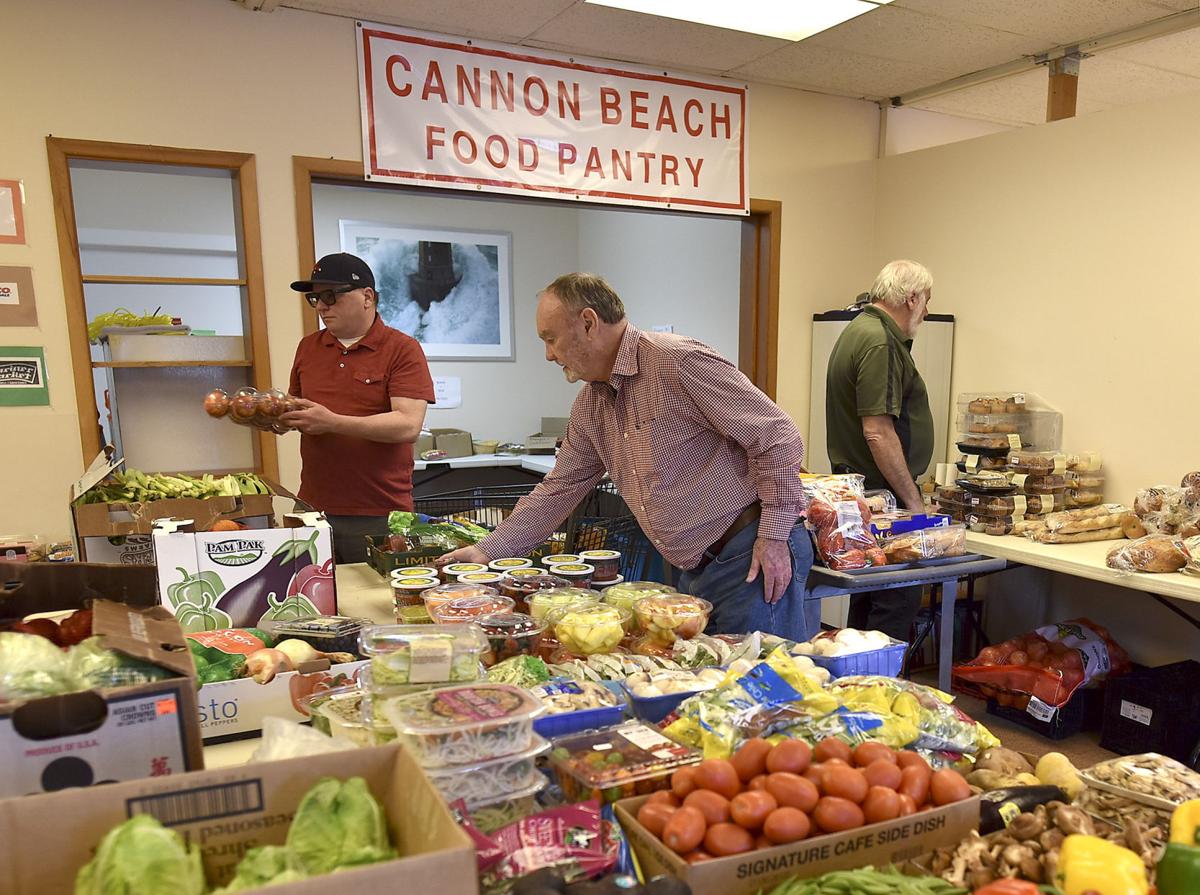 David Kinhan, Charles Bennett and Rock Wickham line the tables with produce at the food pantry in Cannon Beach.

David Kinhan and Rock Wickham prepare the Cannon Beach Food Pantry for those in need.

Produce sits out on a table at the Cannon Beach Food Pantry.

Canned goods line the shelves of the dry storage room at the Cannon Beach Food Pantry.

David Kinhan, Charles Bennett and Rock Wickham line the tables with produce at the food pantry in Cannon Beach.

As Nancy Littell and Judy Wood prepared for the Cannon Beach Food Pantry’s weekly Wednesday service, they reminisced about the day it first opened.

Ten years ago, the food pantry was a few tables lined up in the basement of Cannon Beach Community Church. A few minutes before they were supposed to open their doors, no one was waiting in line.

“I remember thinking, ‘What if we throw a party and no one comes?’” Littell laughed. “Yeah, well, I don’t worry about that now. Our dance floor is full.”

Over the past two years, the number of households using the small pantry in the shuttered Cannon Beach Elementary School has almost doubled. The food pantry used to serve about 26 households a week. Now, Littell and Wood are seeing closer to 40 families every Wednesday, all taking home about three to five days worth of food.

While those visiting the food pantry represent a diverse population, Littell and Wood, the co-chairwomen, said almost everyone they serve lives from Cannon Beach to Jewell. In an informal survey last year, volunteers interviewed 89 households and found about 50 percent of all customers worked in a hotel, restaurant or retail job in Cannon Beach.

“The need is here, the need is strong and it’s increasing,” Littell said. “A lot people don’t realize we’re even here. They ask, ‘Why do we need a food bank in a place like Cannon Beach?’ Well, we have the need.”

The rising demand for emergency food is nothing new, Clatsop County Regional Food Bank Director Marlin Martin said. More than 25 percent of county residents qualify for emergency food assistance, and the number of households served peaked at 1,400 countywide in 2017.

“We’ve been riding a high wave. We’ve continued to increase. We think we are finally reaching everyone that kind of needs help on a regular basis. We are hoping someday it starts going down,” Martin said. “In the food banking business, saying business is up is not always a good thing.”

While use has been steadily going up for years all over the county, the sharp increase at a pantry as small as Cannon Beach’s is unusual, Martin said.

Littell and Wood said they don’t have a particular explanation for the influx, but in general surmise the tourism-based economy contributes to a growing need.

Much of the work in Cannon Beach is seasonal, and when tourism dips, so do work hours and paychecks, Littell said.

“I also think part of the reason for the uptick is people are still finding out we’re here,” Littell said. “We’re trying to raise our visibility.”

Martin also said the increase could be a reflection of the same families picking up supplies more frequently.

“We used to be third tier. When family income disappears, you rely more on SNAP (Supplemental Nutrition Assistance Program), and that is only designed for a certain amount of food. So you become more reliant on emergency food services,” Martin said. “So people aren’t able to work, or are on fixed incomes, but the cost of living is still going up. You start falling deeper into poverty, so you seek more noncost services like the food bank.”

With an increase in demand comes a need for more resources, which, for an entirely volunteer organization of about 20, can be tricky. More demand for food meant the need for more trucks for hauling, more organizing, and of course, more supplies to give out.

“Some days it really feels like we’re hustling, but I wouldn’t say we’ve ever felt overwhelmed,” Wood said. “It’s too important to slow down.”

Luckily, Wood said, there has been an upswell in financial and food donations, keeping the amount of food they must purchase steady. Almost 70 percent of the 70,000 pounds of the food served last year was donated.

Donations from second homeowners who have leftover food from their vacations have been on the rise, as well as from local restaurants and grocery stores. Sometimes people will drive by and hand Littell a check when they see her. Some individuals in town take it upon themselves to consistently supply one particular item each week. She attributes the increase to getting the word out about a growing need.

“We have one person who provides us laundry soap every week. One lady decided she couldn’t stand the idea of people not having toothbrushes,” Littell said. “So she’s donated toothbrushes for two years now.”

While the pantry is keeping up for now, the board has organized its first fundraiser after 10 years: a soup cook-off and silent auction from 12 p.m. to 5 p.m. on April 14 at the American Legion. Whatever is raised will go toward growing food reserves.

“Gosh. I remember when 26 households seemed like a big number. We really thought we were hustling then,” Littell said. “I guess we were just getting started.”