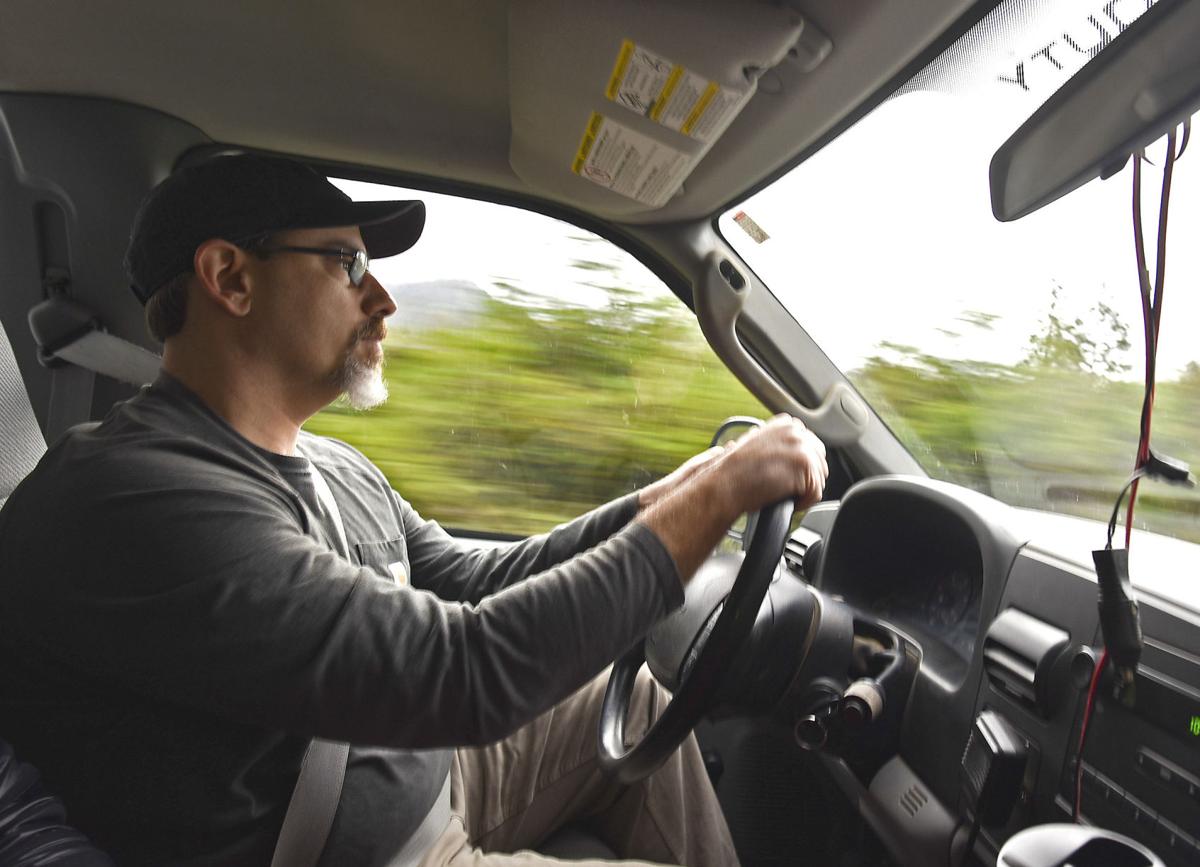 Phil Chick takes a drive up into the higher elevations of the Arch Cape watershed, where much of the water supply to the area originates. 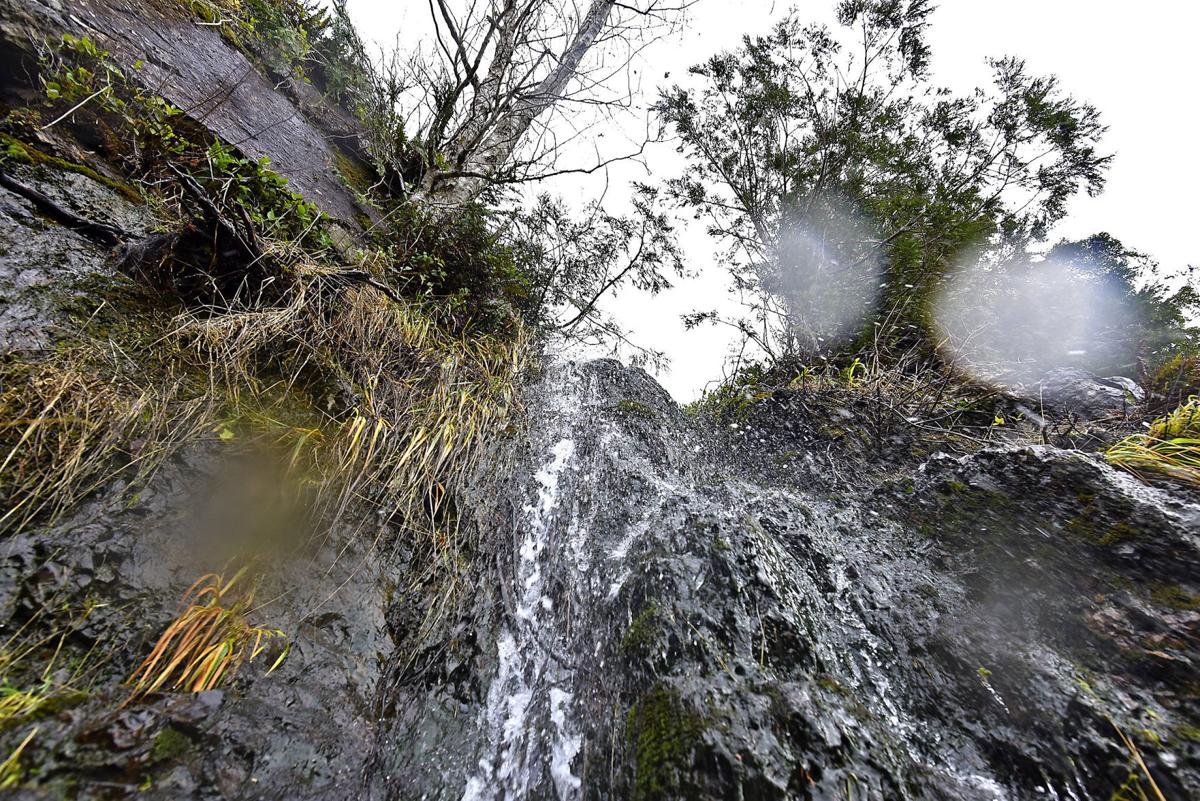 A small waterfall in the upper reaches of the Arch Cape watershed contributes to the area's supply of clean water. 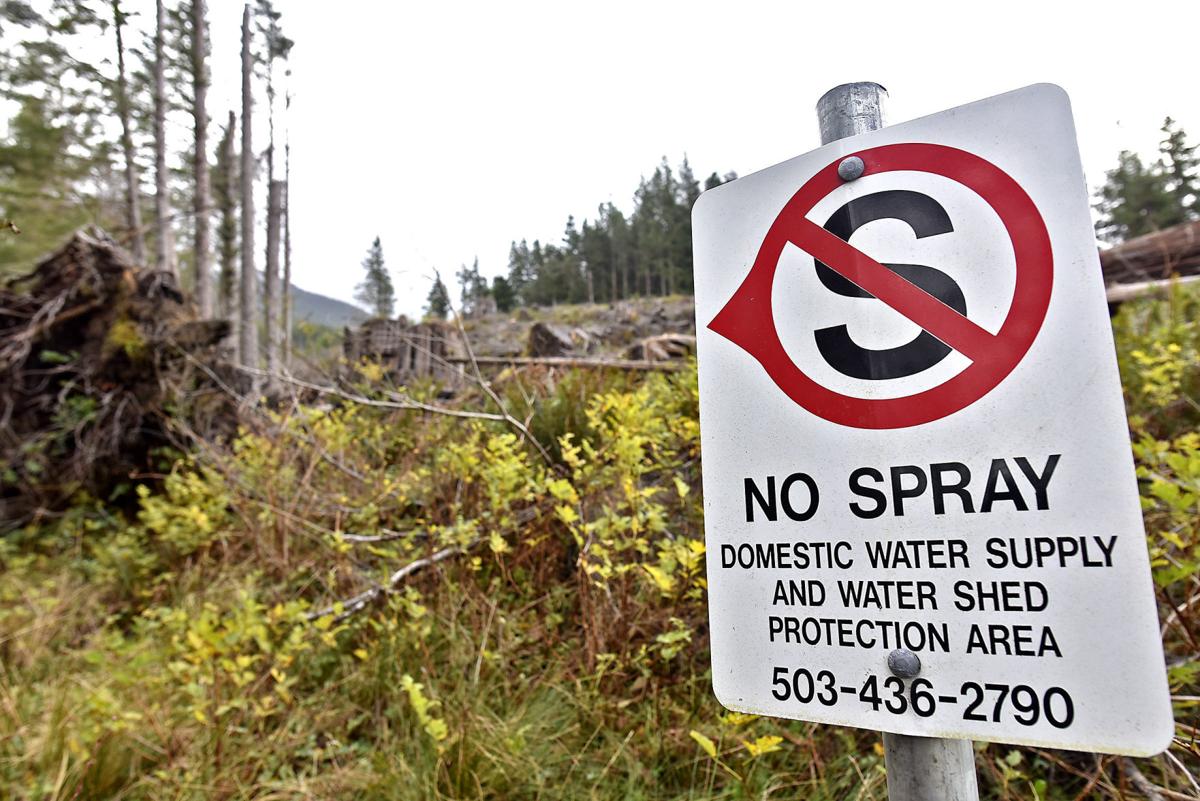 Signs warning not to spray chemicals dot the landscape of the 2,100-acre Arch Cape watershed. 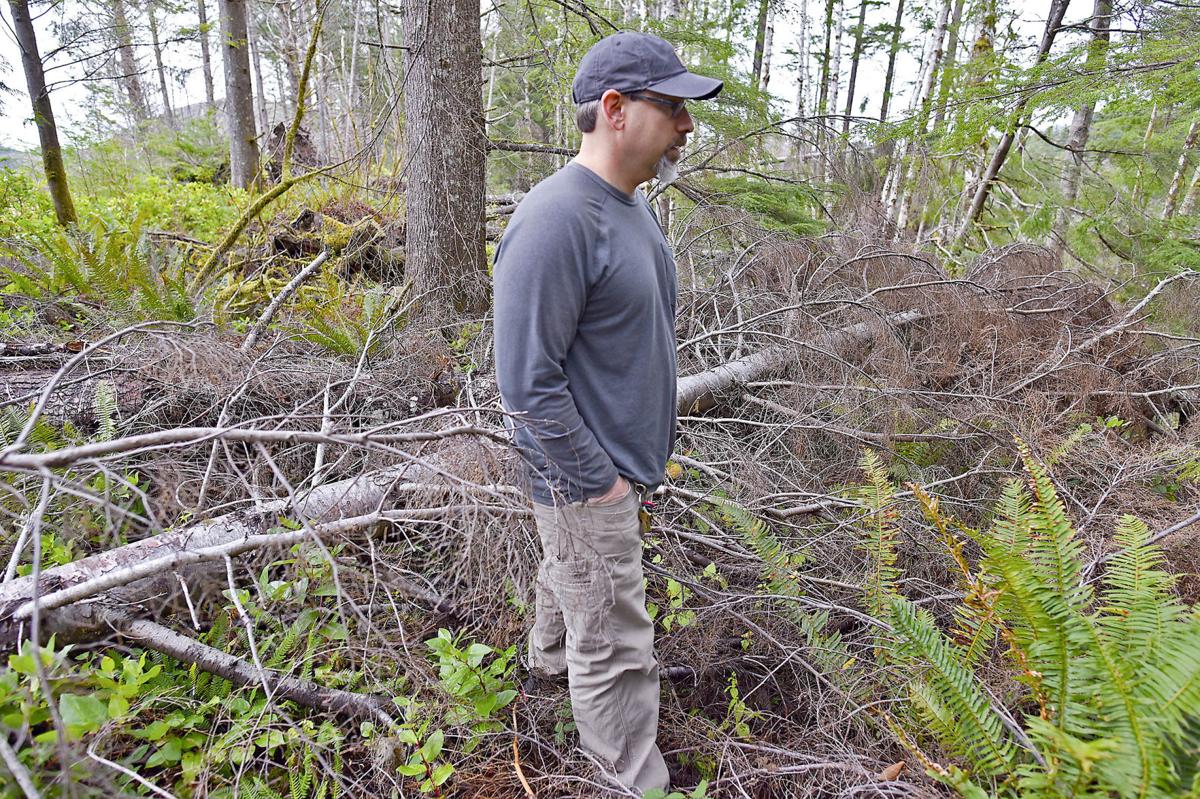 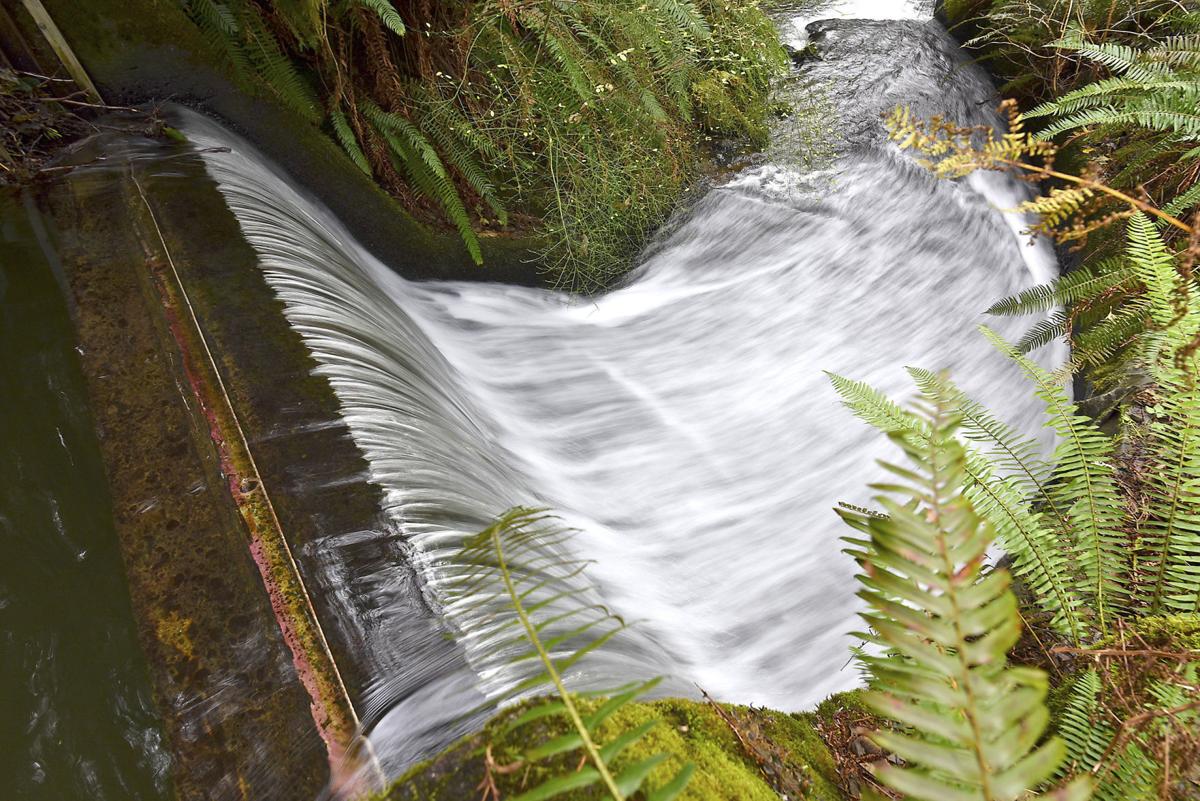 A stream that helps feed the 2,100-acre Arch Cape watershed spills over a manmade structure that helps direct the water to district infrastructure for treatment.

Phil Chick takes a drive up into the higher elevations of the Arch Cape watershed, where much of the water supply to the area originates.

A small waterfall in the upper reaches of the Arch Cape watershed contributes to the area's supply of clean water.

Signs warning not to spray chemicals dot the landscape of the 2,100-acre Arch Cape watershed.

A stream that helps feed the 2,100-acre Arch Cape watershed spills over a manmade structure that helps direct the water to district infrastructure for treatment.

Beside many of the winding roads that weave through Arch Cape’s watershed lie trees marked with orange tags.

A few years ago, the timber company that owned the property tried to lessen the impact of fallen trees, said Phil Chick, the manager of Arch Cape Water and Sanitary District. Three times the amount of tree mass was left in one section to prevent eroding sediment from flowing into Shark Creek — the town’s main water source.

But after a major winter storm, those trees blew down, too.

“On a steep slope like this, when there aren’t trees there to stop that water, the sediment goes into the water intake like a chute,” Chick said.

The 20-foot buffers required by the state Forest Practices Act get blown down during the intense wind storms on the coast, Chick said. In the winter, sometimes high turbidity from increased sedimentation means Chick can’t make drinking water for four to six days. In previous years, Arch Cape routinely saw high readings of trihalomethanes, a carcinogen formed when the turbidity caused from runoff reacted with water cleaning agents.

“(Property owners) are following the rules. But in this wind, it’s just not enough. It’s like blowing down matchsticks,” Chick said.

Water treatment issues are part of the driving force behind why Arch Cape Water District and other community partners want their 2,100-acre watershed as a community forest. The designation would allow the water district to manage, conserve and harvest the forestland as they see fit with community input.

If acquired, Arch Cape would be one of the few community-owned forests on the Oregon Coast.

“The conversation was always there in the back of people’s minds, but in the last six months or so, the possibility has become a vision we are committed to,” Chick said. “I see this as a holistic approach to treating and providing safe water. It’s not about just treating symptoms — turbidity, eroding slopes — it’s about ownership of the entire process from headwaters to the tap.”

The issues the Arch Cape water district has faced are not unique. Rockaway Beach, a small town of just over 1,300 people south of Manzanita, has problems with water quality.

The state Department of Environmental Quality identified 50 coastal municipalities in Oregon that get water from forested drinking watersheds.

Discussion of creating a community forest intensified about three years ago after coastal communities started to notice they were suffering from similar problems, Oregon Coast Alliance President Mike Manzulli said.

The North Coast Basin Coalition, representing more than a dozen communities on the coast, formed in 2014 as a way to band together to come up with solutions — and developing community forests was one of them.

In Arch Cape, the water district is working with the North Coast Land Conservancy to raise enough money to buy the land from Ecotrust Forest Management, which is managing the property until the district can afford the purchase.

If the watershed is owned by the district, Manzulli said the community can make different management decisions, like requiring larger buffers, banning pesticides and choosing to select cut trees for revenue that could be given back to support the community.

Community forest models are common in other parts the country, but fairly uncommon in the Pacific Northwest, Manzulli said. Astoria is a notable exception as a city which has had full ownership of its Bear Creek watershed since the 1950s.

“The people living in the forest are managing the forest,” Manzulli said. “When you are connected to the forest you are managing, you aren’t going to clear-cut it and spray pesticides.”

A step forward was made this month when Sustainable Northwest, an environmental organization which works with forest collaborative groups in the Pacific Northwest, received a Meyer Memorial Trust grant for $250,000 to help fund efforts to map these watersheds and identify which are most at risk for issues like sedimentation and erosion.

“Most of the drinking watersheds are managed for timber production,” said Andrew Spaeth, the forest program director at Sustainable Northwest. “The goal of this project is to maintain those watersheds as working forestlands and manage them in a way that aligns with the best available science, community interests and priorities, and the quantity and quality of water available to local residents and visitors.”

Manzulli hopes the grant will help identify which parts of the watershed are suitable for sustainable timber production and which need to be preserved for recreation and conservation, he said.

The land conservancy and the water district have also been recommended by the Oregon Department of Forestry’s State Forest Stewardship Coordinating Committee to be considered for $4.5 million grant from the U.S. Forest Service to purchase the land.

Because timber prices fluctuate, there is not a static price for the land, Manzulli said. But next steps will be the water district entering a purchase and sale agreement with Ecotrust Forest Management, followed by a series of public meetings and fundraising efforts over the next few years.

“We hope this project becomes a project for what we all can do, and it can get replicated down the coast,” Manzulli said.