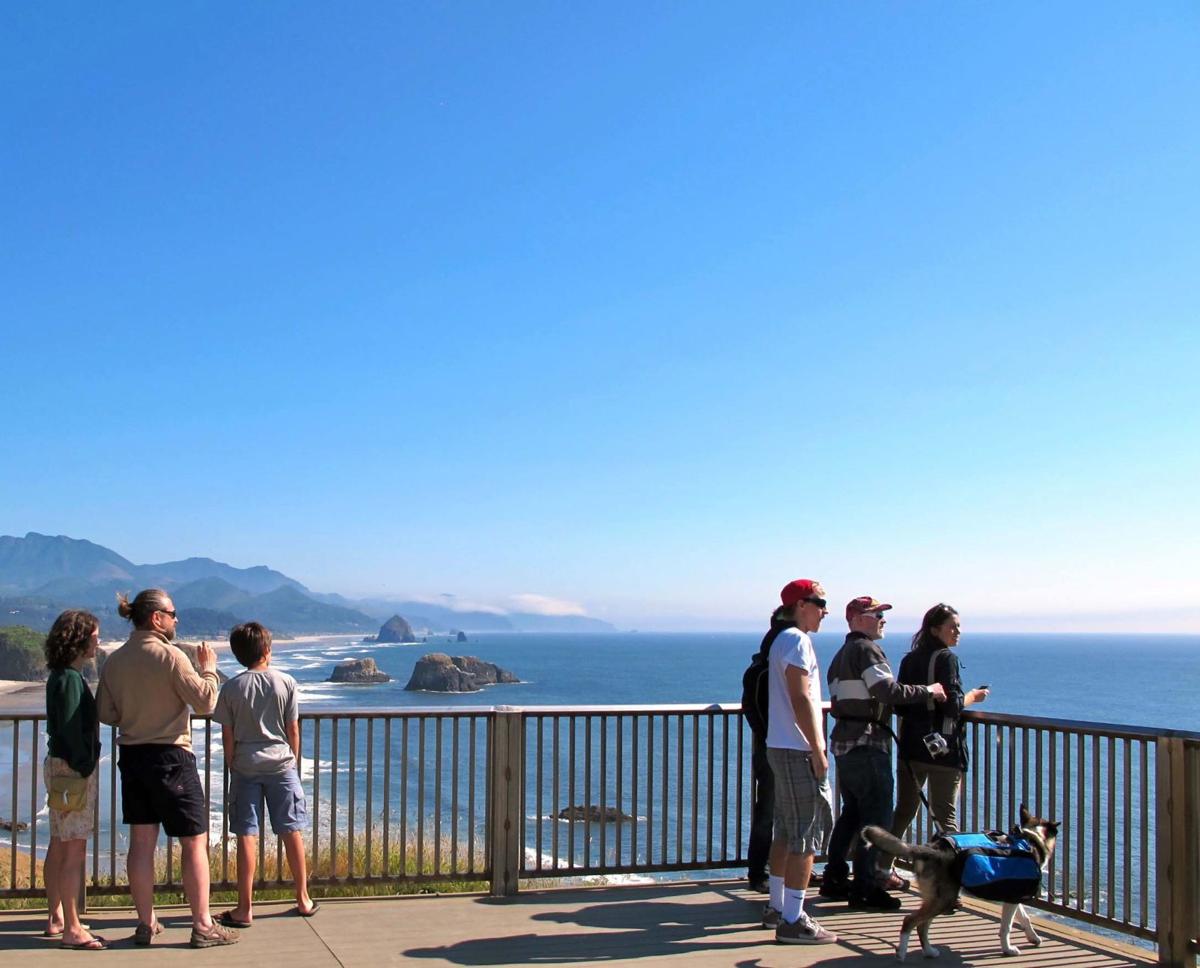 Spectacular scenes normally abound from the viewing platform at Ecola Point in Cannon Beach as seen in this photo from 2013. 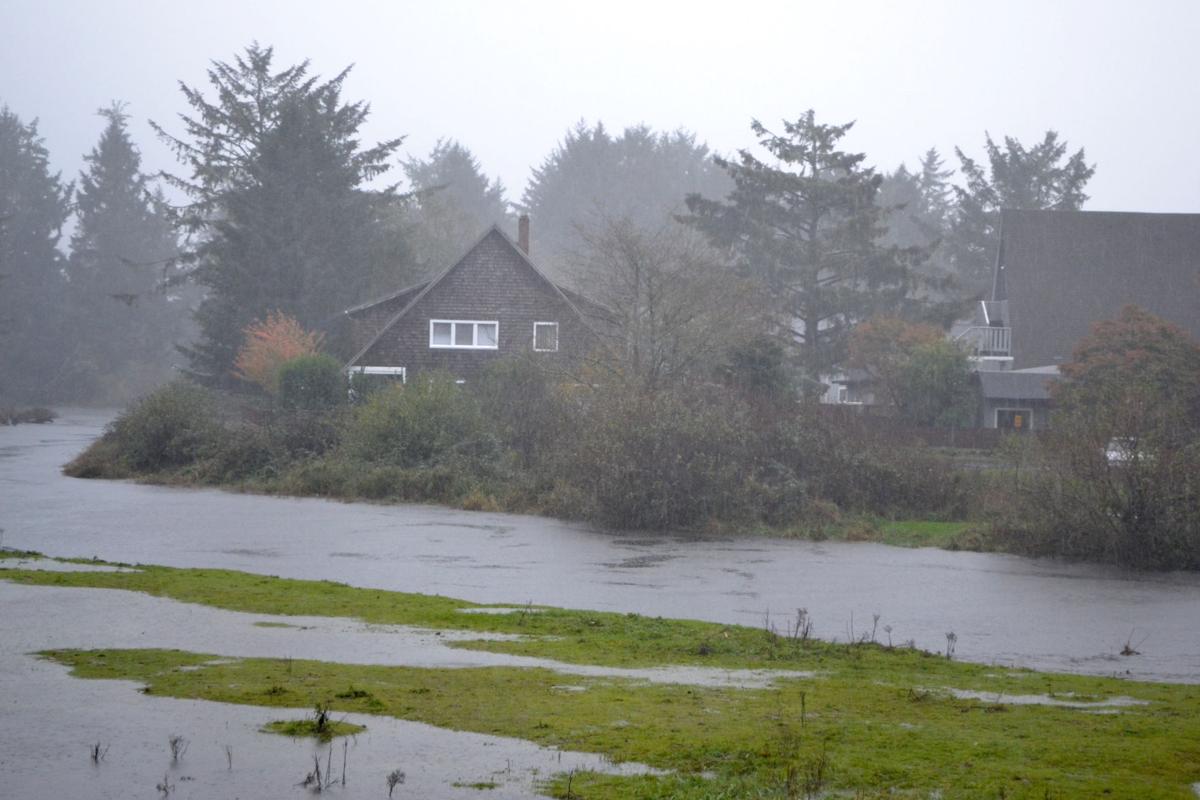 Spectacular scenes normally abound from the viewing platform at Ecola Point in Cannon Beach as seen in this photo from 2013.

When the storm-damaged road will reopen isn’t certain, but Matt Rippee, park manager of the Nehalem Bay Management Unit which oversees Ecola and seven other parks and recreation sites in northwestern Oregon, is hopeful it could be as soon as May.

The November storm, said Rippee, dumped over 8 inches of rain along the north Oregon Coast during a five-day period in November, rendering the culvert at Canyon Creek underneath the road useless and leading to its closure. A subsequent deluge in early December triggered the drop of another section of the road leading to Indian Beach near the park entrance.

“That area of the road is still stable enough and park crews have been able to fill it in to keep it passable. If we take another big hit, however, it could lead to closing the park,” Rippee said, noting that the Ecola State Park host has vacated the park as a precaution.

As for the culvert, Cannon Creek, which flows through the park and is “usually a nice little creek,” according to Rippee, rerouted itself around the culvert creating a dangerous situation and closing vehicular access to Indian Beach.

“In the meantime, Indian Beach is still accessible by trail. It’s just a matter of parking at the Ecola Point parking lot and taking the trail down to the beach from there,” Rippee noted.

Park crews removed the viewing platform due to its precarious perch just above an active landslide. In 2012, a portion of another viewing platform in close proximity to the one just removed actually fell into the sea, according to Rippee. In evaluating new sites to relocate the platform, the Oregon Parks and Recreation Department will be aided by geotech engineers in its effort to secure a more safe and secure location. It is a process already underway as the department looks to have the park shipshape for visitors later this spring.

Farther south, 5 miles from Cannon Beach, the November storm effectively wiped out the trail from the parking lot to the beach at Arcadia Beach Recreation Site. The beach access trail at Arcadia was earmarked for improvements this spring at a cost of $5,000 and with the help of state correctional crews.

“The plan was to improve the trail anyway, but this will certainly change the scope of that work,” said Rippee, who is no longer sure that the money set aside for the project will cover the cost. The good news is the parking lot and restroom facilities are still open to the public. The parks department suggests gaining alternative beach access at nearby Hug Point or Tolovana recreation sites.

“In terms of landslides, it’s mostly Ecola that experiences them,” Rippee said. “It seems not a year goes by that repairs are needed. It’s a very active area.”

To prove his point, Rippee accessed Google Earth on his computer and zeroed in on Ecola State Park. A closeup image shows telltale signs of landslides that have occurred previously. Trails over the years have had to be rerouted as well.

If El Niño simmers down, as forecasted for the early part of this year, Rippee said he is confident repairs at Ecola and Arcadia will be completed by May. He is quick to point out, however, “that’s a best-case scenario.”

As far as a dollar amount for the work, it is too early to tell until Parks and Recreation solicits bids, something that will occur in the next few weeks. Complicating matters in repairing the culvert and washed out road at Ecola is the issue of fish passage in Canyon Creek. Engineers have yet to determine whether or not to replace the existing culvert with a larger one or construct a bridge over the creek. Once the bidding process has been completed and the storm season has passed work will commence.

As for the rest of 2015, it was a good year for the state parks’ system. Early numbers indicate visitation throughout the state was up nearly 25 percent from the year before. Rippee is keeping his fingers crossed that the worst weather this winter is over and that he and his staff can once again concentrate on “routine” park maintenance in anticipation of the 2016 season.

As for the stormy and wet November weekend that closed Indian Beach Road at Ecola State Park and beach access at Arcadia Beach State Recreation Site, Rippee sums it up in just five words: “That was quite a weekend.”