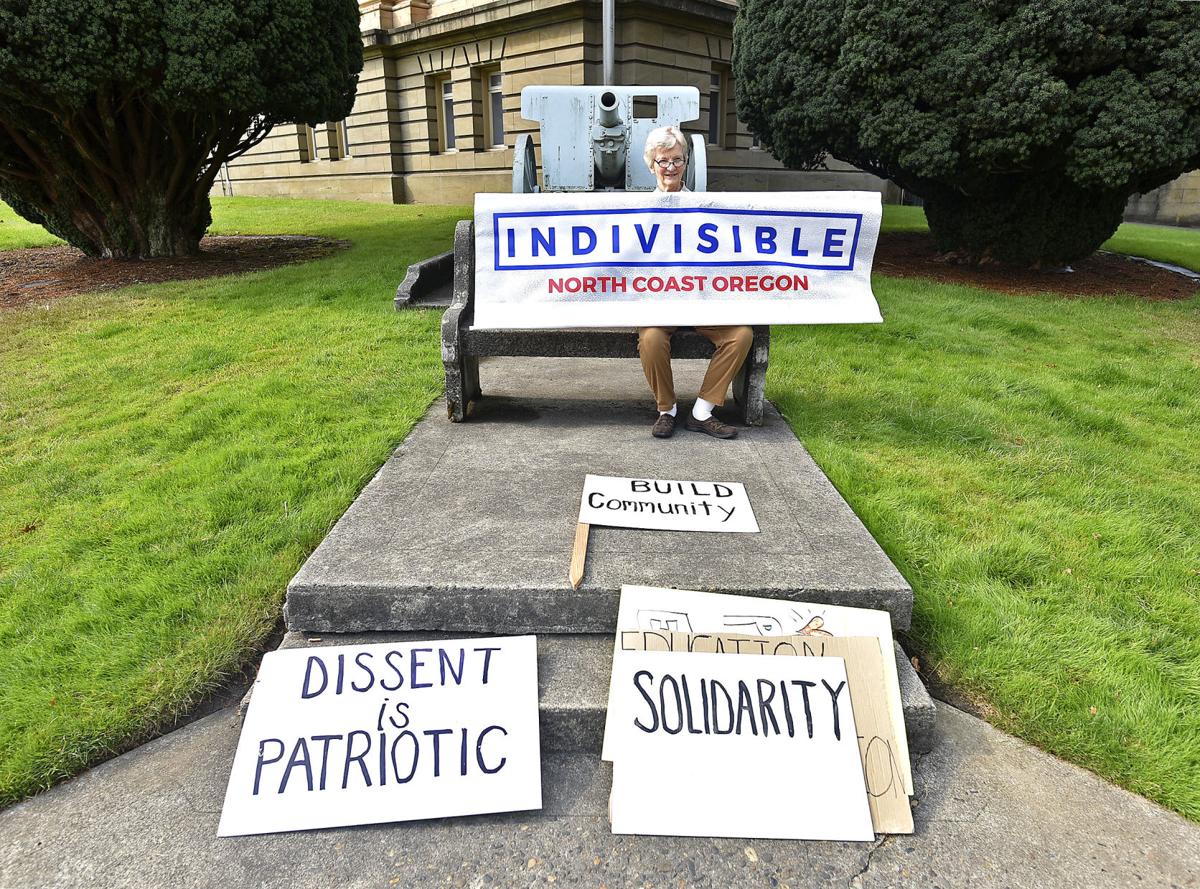 Activists voiced their opinions in front of the Clatsop County Courthouse in September. 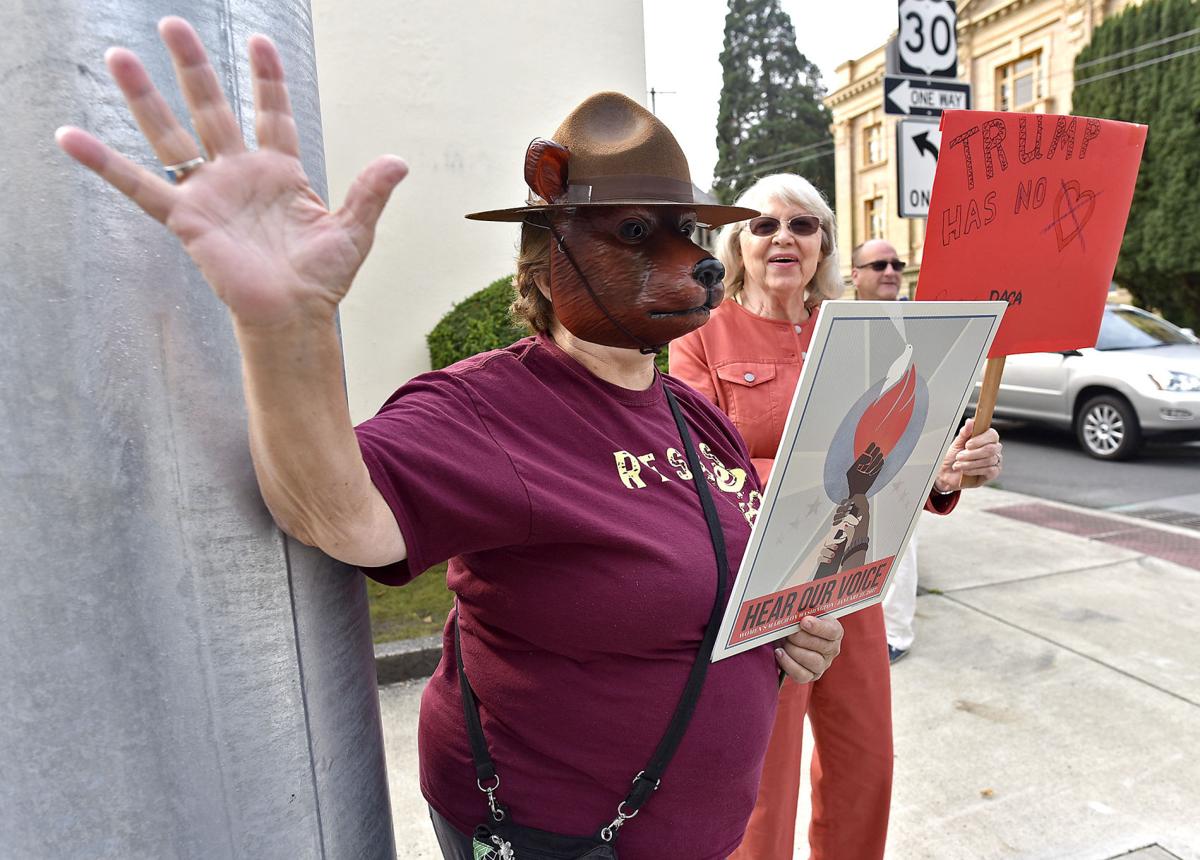 People gathered at the Clatsop County Courthouse in September to demonstrate against President Donald Trump. 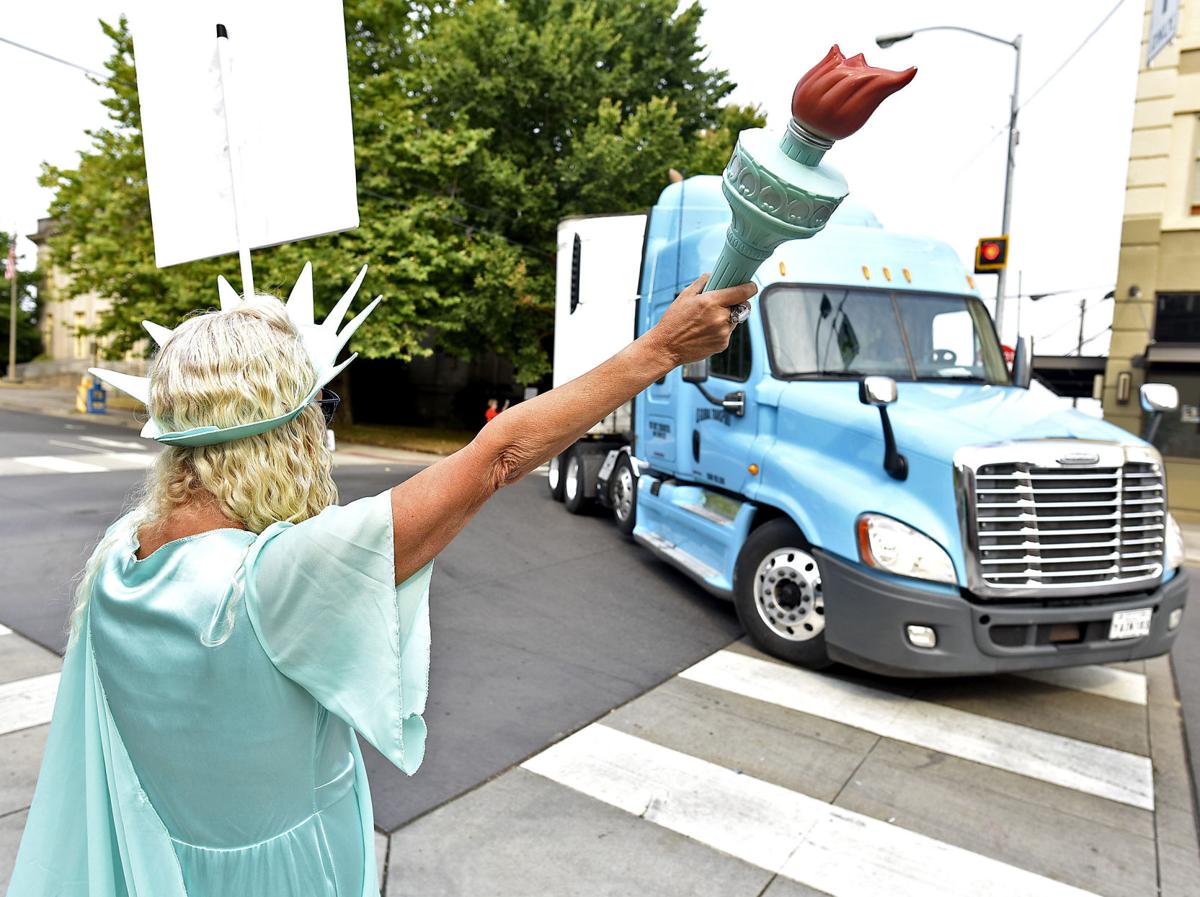 A demonstrator dressed as the Statue of Liberty waves to passing vehicles at a September protest.

Activists voiced their opinions in front of the Clatsop County Courthouse in September.

People gathered at the Clatsop County Courthouse in September to demonstrate against President Donald Trump.

A demonstrator dressed as the Statue of Liberty waves to passing vehicles at a September protest.

Scott Lee, chairman of the Clatsop County Board of Commissioners, stood outside his bike shop on the corner of 11th Street and Marine Drive on a drizzly January afternoon last year.

Lee had been distressed for two months after Donald Trump was elected president. Even his father, a Vietnam War veteran who had voted Republican since 1960 and often disagrees with his son politically, could not bring himself to vote for the billionaire businessman.

But on that January day, hundreds of people strode through downtown Astoria as part of the Women’s March to counter Trump’s inauguration. On the first full day of Trump’s presidency, Lee wore a smile.

“I was very pleased to see one of the largest marches I had ever seen in Astoria,” Lee said. “After such a difficult time, it brought hope back to me. I was really hopeful people could push back against the Trump regime.”

The march was like an exorcism for progressive activists disappointed with the election. Many directed the energy from the march into a grassroots call to action.

“My concern is that I didn’t want it to stop. I wanted to turn it into action,” said Deb Vanasse, one of the march organizers. “We need civic engagement. This is no time for complacency from our perspective.”

Vanasse and a handful of others launched Indivisible North Coast Oregon, which is loosely affiliated with a nationwide activist organization started by former congressional staffers. The movement encourages civic engagement and promotes progressive values through rallies, meetings, canvassing and social media campaigns.

About 15 people lead the group, nearly 500 subscribe to its weekly email updates and nearly 900 follow it on Facebook. The group offers leadership training and has different teams such as Oppose Bigotry and Vote the Future. Nearly all of its funds come from member donations.

“Some of us are experienced activists. Some of us never considered being activists until the last presidential election,” Vanasse said. “We’ve been building the boat while sailing. Everything has been a surprise because we’re building things so rapidly.”

A year into Trump’s presidency, the activists offer little to no praise of his performance. They are particularly troubled by the threat to the Deferred Action for Childhood Arrivals program, funding cuts to the U.S. Department of Housing and Urban Development, reductions to national parks and monuments and the attempted repeal of the Affordable Care Act, or Obamacare.

Vanasse described her political mood as a constant state of “low-level dread.”

Trump and his allies have taunted progressive activists as sore losers unable to accept the election results.

In turn, activists have conceded that their messages likely will never sway the president.

“I don’t see that the president looks beyond his base, and we’re not part of this base,” Vanasse said.

They do, however, feel like they’ve made an impact on Congress. The most significant victory might be the pushback against the Obamacare repeal. Congressional offices were flooded with calls about the topic, while town halls were more lively than they’ve been since conservatives in the Tea Party movement fought the health care law in 2010.

“I think Indivisible and groups like it send a very clear message to Oregon politicians on where we stand,” said Lee, who has joined demonstrations in Portland in the past year.

A recent internal survey of more than 30 Indivisible followers produced a range of ideas and even some mixed reviews about the organization’s effectiveness and openness. One thing the majority of respondents agreed on, though, was the need to focus on the midterm elections in November.

The group may have already made some strides on that front.

From November 2016 to November of last year, Clatsop County voter registration increased more than 7 percent, the fourth-largest spike in the state, according to statistics from the Oregon Secretary of State’s Office. The county hadn’t seen a positive change in voter registration in odd-numbered years since 2003.

Indivisible’s views align more with the Democratic Party, and some of its members also are involved with Clatsop County Democrats. But the organization does not view itself as a political operation as much as a political advocacy campaign. Flexibility is one of its greatest strengths, Vanasse said.

“We’re sort of not entrenched in the meritocracy of a political party,” she said. “I believe Indivisible is a force to be reckoned with for that reason.”

The group expects to add to its political efforts this year. It will endorse candidates and ballot measures and push for election reforms such as county voter pamphlets in off-year elections.

This Saturday, Indivisible will host an event called Turn the Tide Regional Summit at Fort George Brewery’s Lovell Showroom. It will feature nearly 14 hours of guest speakers, workshops, a question-and-answer session for prospective candidates and a community dance.

Vanasse believes civic engagement has risen on the North Coast in the past year. Since Trump won’t face voters again until 2020, though, she is hoping that energy will be focused on more immediate goals.

“We’re very focused on midterm elections, getting out votes and getting good candidates,” she said. “There’s a lot more to be done to get our democracy on track than changing the name in the White House.”