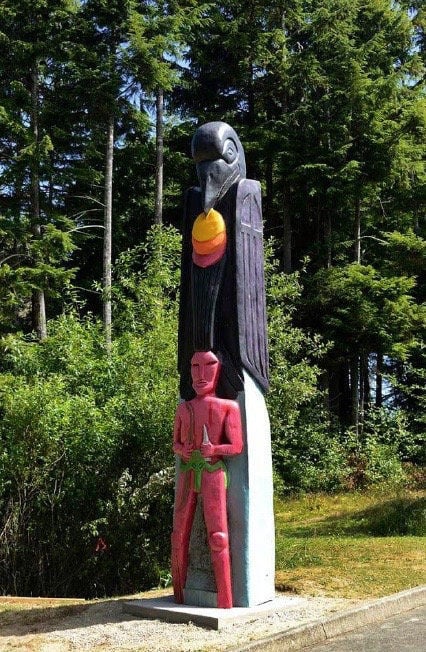 A totem pole designed by Guy Capoeman. A 10-foot-tall welcoming pole in the figure of a Clatsop tribesman may soon be installed in NeCus' Park. 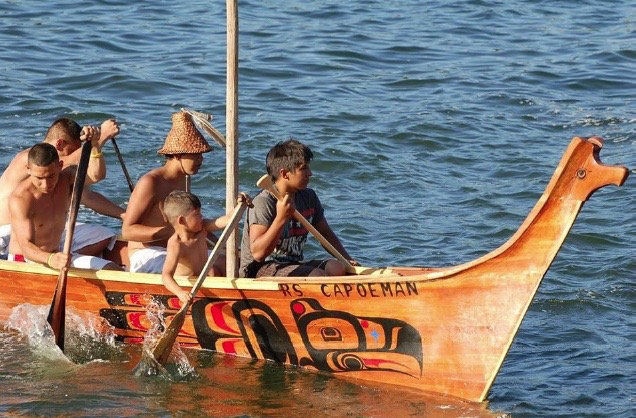 A totem pole designed by Guy Capoeman. A 10-foot-tall welcoming pole in the figure of a Clatsop tribesman may soon be installed in NeCus' Park.

CANNON BEACH — A 10-foot tall welcoming pole in the figure of a Clatsop tribesman may soon be installed in NeCus’ Park at the former Cannon Beach Elementary School playground.

The city’s arts advisory committee has recommended that its annual $10,000 grant for public art be spent on the statue, to be carved from a cedar pole. Before the pole is formally commissioned, however, it must be approved by the city’s design review board, which will consider it in February. City Manager Brant Kucera will have the final say about whether the statue should be purchased.

The arts committee approved the pole, proposed by the city’s Palette Group, during a meeting this month.

The pole will be carved by Quinault, Washington, artist Guy Capoeman, who has carved other poles and canoes. Some of Capoeman’s relatives belong to the Clatsop, Nehalem and Tillamook tribes, according to Dick Basch, vice chairman of the Clatsop-Nehalem Tribe.

The statue will depict a member of the NeCus’ village extending his arm out in a gesture of welcoming. Palette Group members are suggesting that the pole be placed just west of the picnic table at NeCus’ Park in a clearing. The pole would face toward the ocean, as NeCus’ village members did when they welcomed fishermen and traders approaching the Clatsop village by dugout canoe on the ocean.

Although the statue would be carved from a cedar log, it would have spots of black, red and blue paint. Members of the public arts committee questioned how intense the colors would be, and Basch, who has been in contact with Capoeman, said he thought they would be created from natural pigment.

Arts committee member Allyn Cantor, of White Bird Gallery, questioned how well the pole would wear in the weather. “Is it meant to be weather-worn?” she asked.

“Think of old totem poles you have seen,” Basch replied. “We could talk to him (Capoeman) about touching it up later.”

Basch noted that Capoeman is carving the statue “as a favor to me and my family. He would charge twice the amount if he did it for another organization,” he said. “If he were doing it for other cities, it would be much, much higher.”

They also questioned what type of base would be used for the pole and how it would be stabilized to withstand windstorms. City Planner Mark Barnes, who attended the meeting, said he would check with the city building official to determine if the concrete pad would have to be engineered to provide more stability.

It could cost about $5,000 to install the pole, in addition to the $10,000 cost to create it, Kucera noted. That expense could come from the city’s budget beginning the next fiscal year, which starts in July, he said.

Barnes also warned committee members that the design review board might want to wait until the designs for two other interpretive signs proposed for the park were submitted or until a citywide parks master plan is completed.

However, Barbara Linnett, chairwoman of the Palette Group, noted that the pole could be moved to another location — perhaps Les Shirley Park — if it wasn’t deemed appropriate in NeCus’ Park.

Because the funding would come from a public arts grant designated for fiscal year 2015, the pole must be approved before the end of June.

“The alternative is not to do it at all,” Linnett said.

Arts committee member Hank Johnson noted that the NeCus’ Park plan calls for an eventual canoe landing on Ecola Creek. “This pole fits nicely with the landing,” he said.

For many generations, the NeCus’ village, on both banks of Ecola Creek, welcomed visitors who paddled canoes to fish or trade south around Neahkahnie Mountain north to the mouth of the Columbia River. They would often stop at NeCus’ to visit and eat with relatives in the Clatsop and Nehalem tribes before continuing their journeys, Basch said after the meeting.

“Many people don’t realize there were Indians here and there are still Indians here,” he said. “This has been a beautiful place to come here for generations.

“I think it’s important for people to realize that there is a group of people who consider this our homeland. And I think it’s always great to see geography through the eyes of someone else, especially the aboriginal people who have deep, deep roots in this land.”