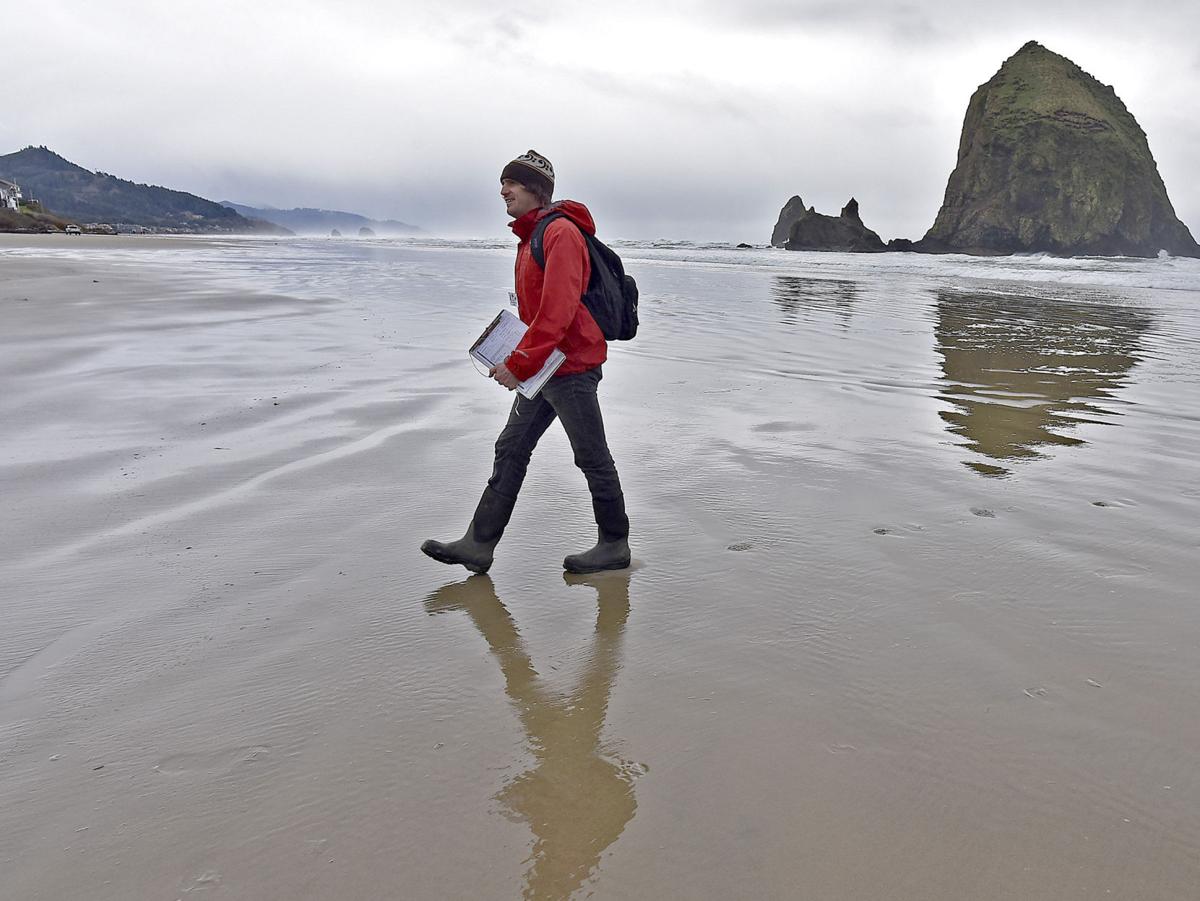 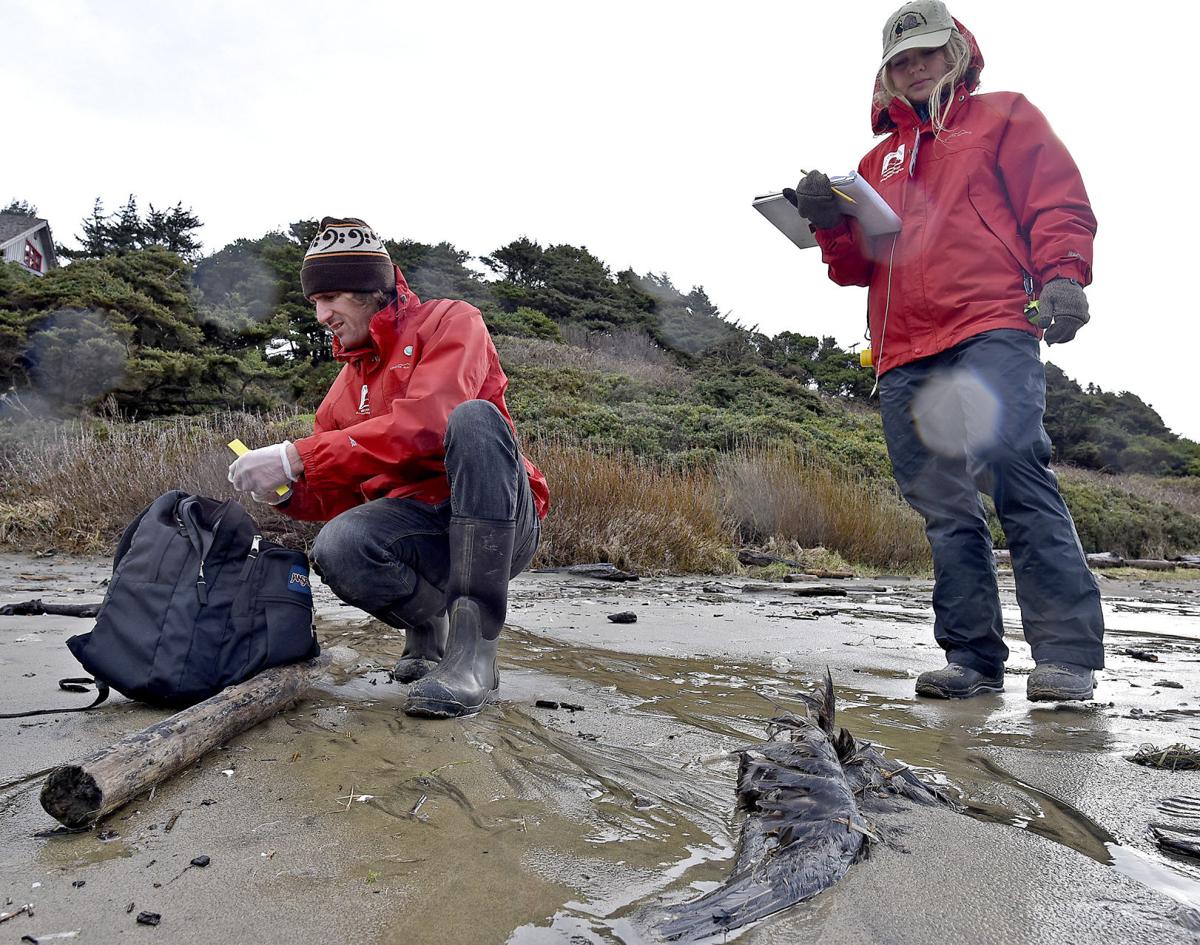 Eric Owen and Brooke Watkins locate the carcass of a bird near Cannon Beach. 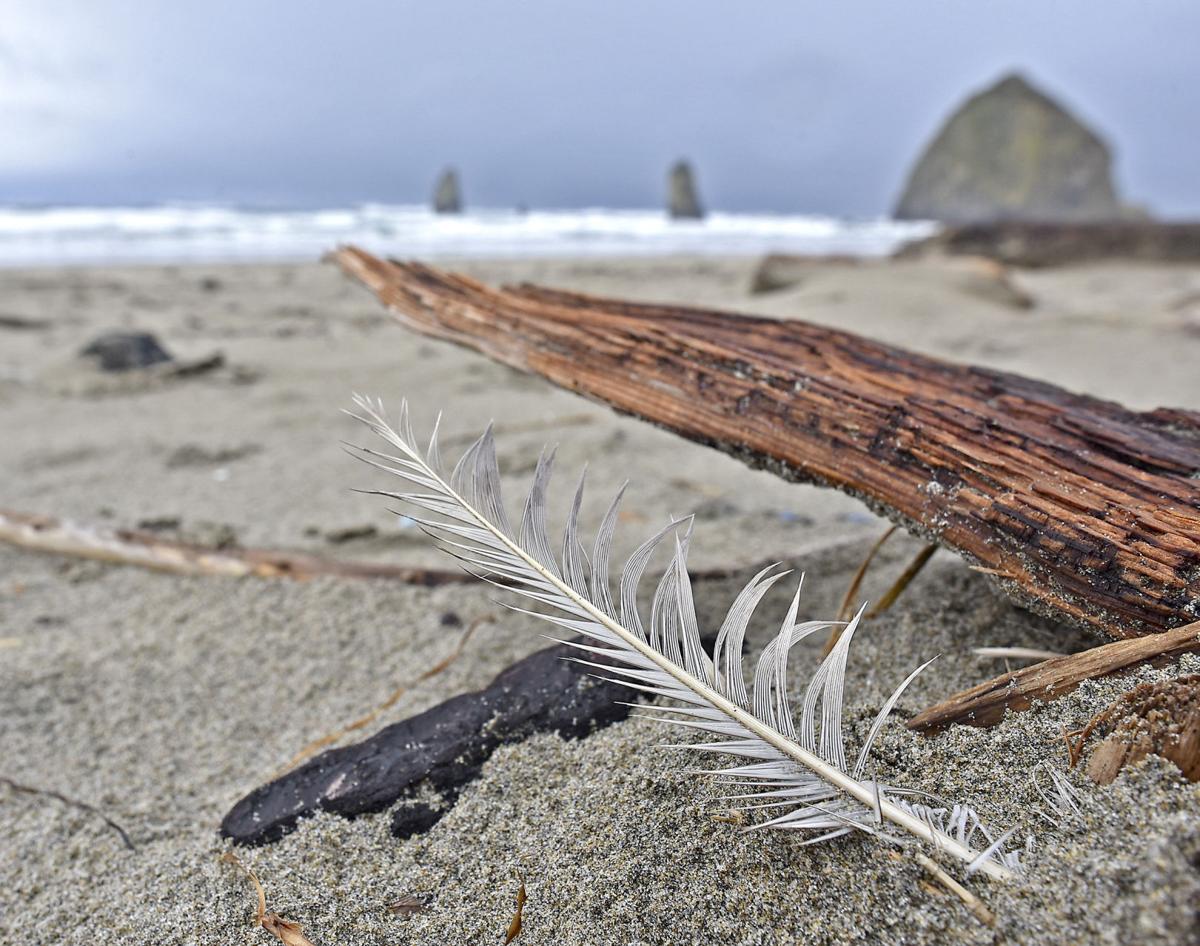 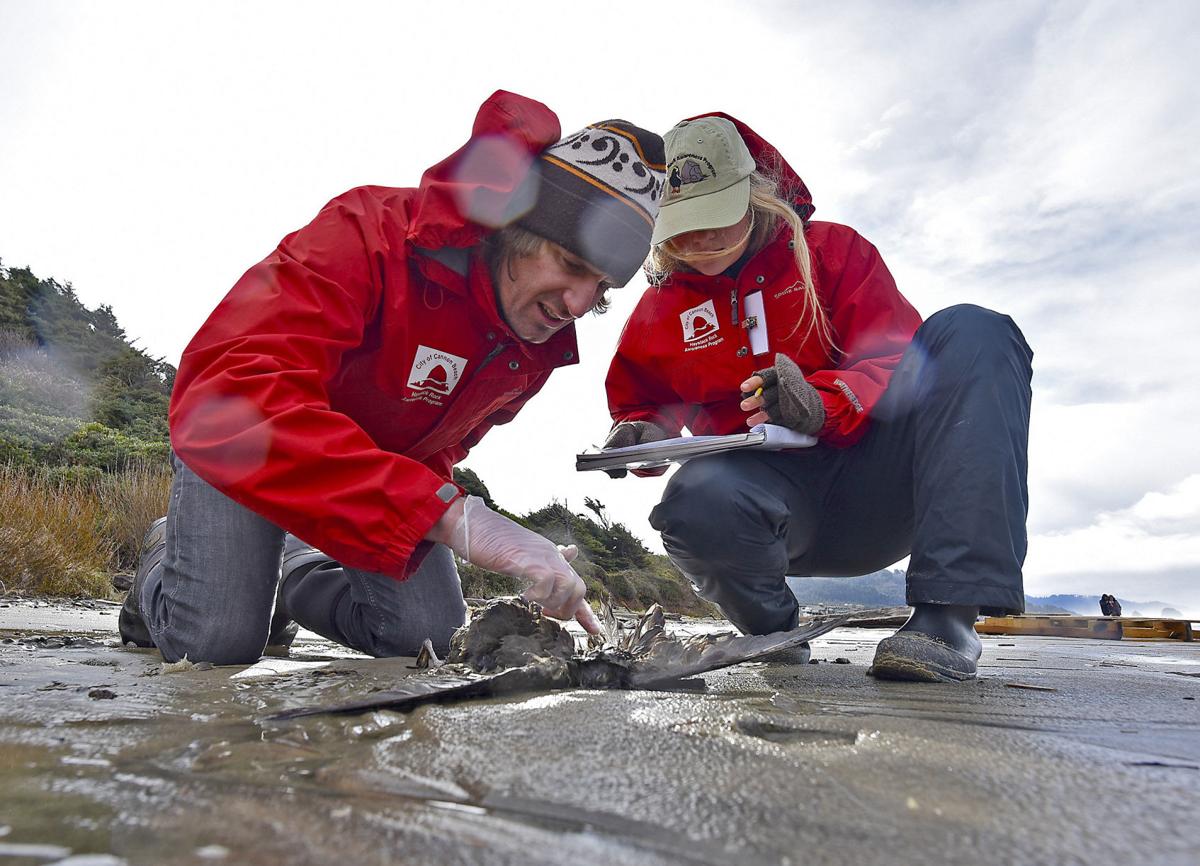 Eric Owen and Brooke Watkins with the Haystack Rock Awareness Program examine a dead bird during a survey near Cannon Beach. 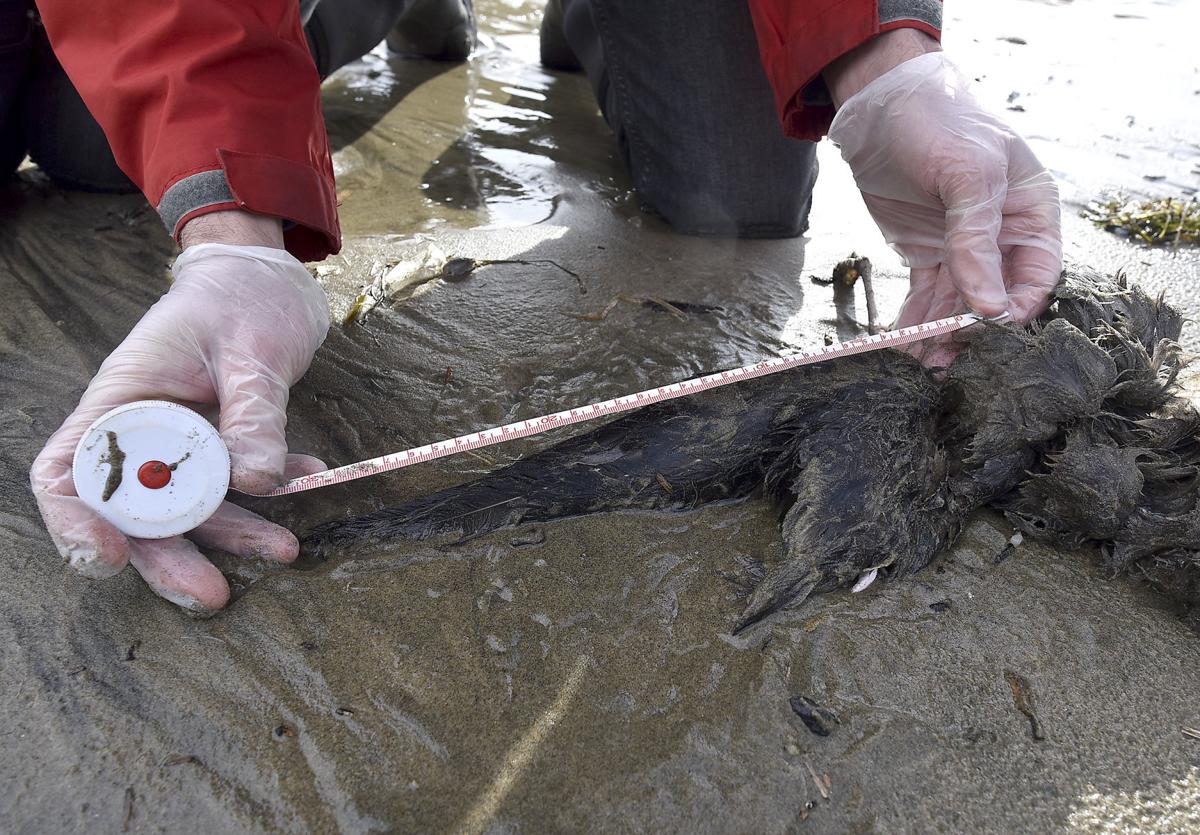 Eric Owen measures the wing of a dead bird during a survey.

Eric Owen and Brooke Watkins locate the carcass of a bird near Cannon Beach.

Eric Owen and Brooke Watkins with the Haystack Rock Awareness Program examine a dead bird during a survey near Cannon Beach.

Eric Owen measures the wing of a dead bird during a survey.

On a misty Friday morning, Eric Owen and Brooke Watkins of the Haystack Rock Awareness Program scanned the beach in search of dead birds.

For the most part it’s a quiet, slow endeavor, marked by long gazes into driftwood piles and debris. But when they found a northern fulmar — a common seabird — they began to identify feet, measure wingspans and take photos.

This monthly ritual is a part of the COASST survey, a program that relies on data taken by volunteers to study large-scale patterns in seabird populations on the West Coast. The Haystack Rock Awareness Program conducts similar surveys for sea stars and marine debris throughout the year.

Surveys like these play a small part in a growing trend in the science community to use citizen scientists as a way to gather massive amounts of data. Over the weekend, marine scientists and conservationists came to Cannon Beach for an annual Coast Conference, a regionwide event to discuss coastal science and stewardship.

Whether the presentation was about ocean debris, marine mammals, seabirds or ocean jellies, many relied on the data collection work of volunteers throughout the state. A database for citizen science programs called Citsci.org, which recorded only a few dozen groups 10 years ago, now has more than 500 groups registered across the country, with new ones registering every day.

Owen, the citizen science coordinator for Haystack Rock Awareness Program, said it’s invaluable to feel like being “a part of a bigger picture.”

“This work needs to be done, but there’s just not enough capacity,” he said. “If we weren’t here? It wouldn’t happen. This data wouldn’t be taken.”

Citizen science is nothing new. The Audubon Society’s Christmas Day Bird Count has existed for almost 120 years, and for centuries natural observations have been recorded in resources like farmers almanacs.

Julia Parrish, a seabird ecologist with the University of Washington and founder of the COASST survey, gives presentations about citizen science around the country and has seen it spike in popularity, particularly in the last decade. Parrish started the group nearly 20 years ago while studying a colony of common murres on Tatoosh Island off the Washington coast.

She wanted to know if the reproduction and die-off patterns she was seeing were applicable to the entire species. But in order to know she would need data collected on more than one beach at a time.

“When you do that kind of research, you get a lot of information about one colony,” Parrish said. “But it’s hard to understand whether that one place is indicative of the whole range of the population, or if we are just seeing something that’s going on right there.”

When Parrish launched a pilot citizen science project near Ocean Shores, Washington, she never thought she would get enough volunteers willing to do the work. Now, there are more than 1,000 active in the program.

“It’s hard to imagine more than 50 people at one time wanting to go sample dead birds on a beach,” she laughed. “But I was wrong, which is great.”

Part of the rise has to do with technology, she said. Apps that help identify species and allow unprecedented access to information have driven interest up and removed barriers that would have otherwise made it harder to collect data without formal training. Another is the science community slowly coming around to accept citizen science.

“I think there’s a lot of reticence in the science community to use citizen science. There’s some doubt the data collected is of the precision or accuracy that is needed to document phenomena,” Parrish said. “But as it grows, the more standardized it becomes. What we’re seeing right now is a lot of discussion in citizen science programs asking what they need to do to get to that level.”

But a larger part, she said, is a growing passion in locals to study and protect their own communities that otherwise would not have regular research conducted.

“Haystack Rock Awareness Program is a fabulous example of local people saying ‘Hey, this is our place. We want to collect the data, we want to know what’s going on,’” Parrish said.

While a general decline in federal funding for scientific research could play a factor in the science community’s acceptance of using volunteer-collected data, Parrish said, regardless of funding, there are some projects only citizen scientists can accomplish.

An example was identifying the correlation between massive seabird die-offs and “the Blob,” a large mass of relatively warm water in the Pacific Ocean that lasted through 2015. Millions of seabirds washed ashore from Alaska to California in seven mass extinction events since 2013 — a rate, Parrish said, that is 100 to 1,000 times more than normal, depending on the species.

“Now that we know that, we can dive into why the warm water was affecting them. What did it actually do to these birds?” she said. “We only know that because of the work the volunteers are doing, getting numbers on the carcasses.”

Citizen scientists also were the ones to alert researchers to early warning data about invasive species, like when European green crabs started showing up on the West Coast in 2016. There have been multiple times Parrish has been alerted to rare seabirds washing ashore that otherwise would have gone unnoticed.

“We don’t do that with mainstream science because we don’t have the money, the personnel to do it,” she said. “To me it’s a contract, like a marriage contract, between mainstream scientists and coastal citizenry to monitor coastal health.”

Back in Cannon Beach, Owen sees the benefit going both ways with his volunteers.

“It’s intrinsically valuable for our volunteers. What they are doing, these issues, directly affect them,” Owen said. “I think they are realizing how accessible it is.”